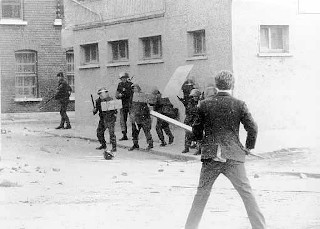 During street disturbances on July 8, 1971, British soldiers shoot dead two Catholic civilians in Derry, County Londonderry, Northern Ireland. Some of the worst violence in the town for three years flares up when a crowd of 200 gather in Lecky Street at the news of the shootings. As a result, the Social Democratic and Labour Party (SDLP) withdraws from Stormont in protest.

British troops are the target of sporadic rioting in the Republican Bogside area of Derry in the four days leading up to the rioting.

At about 1:00 AM on the morning of July 8, 1971, in the Bogside area of Derry, Seamus Cusack, 28, a local man who is a welder and former boxer, is shot in the upper part of the leg by a soldier of the Crown Forces. He dies about forty minutes later in Letterkenny Hospital in the Republic of Ireland.

Cusack’s death gives rise to further disturbances in the city. Troops open fire, initially with rubber bullets and CS gas, but they fail to disperse the crowd. The rioters retaliate by throwing three nail bombs. The army returns fire. During this exchange, George Desmond Beattie, 19, is shot in the stomach by a soldier and dies instantly at about 3:15 PM. Five soldiers are reportedly injured during the skirmishes.

There is a lull in the violence after Beattie is shot and a group of factory girls march in silence through the area carrying black bags.

Army marksmen claim one of the men they shot was armed with a rifle and another was about to throw a petrol or nail bomb. It is unclear which incident Cusack is involved in, but an inquest hears that he could have been saved if he had gone to a local hospital instead of one 20 miles south of the border in County Donegal. Apparently his rescuers fear they would be arrested by police if he had been taken to the local hospital.

In the evening the Ministry of Defence announces that an additional 500 men from the First King’s Own Scottish Borderers are to be sent to Northern Ireland the following day. This brings to 1,400 the total number of men drafted to Northern Ireland over the previous ten days in preparation for the upcoming traditional The Twelfth celebrations on July 12.

Rubber bullets (also called rubber baton rounds) are rubber or rubber-coated projectiles that can be fired from either standard firearms or dedicated riot guns. They are intended to be a non-lethal alternative to metal projectiles. Like other similar projectiles made from plastic, wax and wood, rubber bullets may be used for short range practice and animal control, but are most commonly associated with use in riot control and to disperse protests.

The British developed rubber rounds – the “Round, Anti-Riot, 1.5in Baton” – in 1970 for use against rioters in Northern Ireland. A low-power propelling charge gives them a muzzle velocity of about 200 feet per second and maximum range of about 110 yards. The intended use is to fire at the ground so that the round bounces up and hits the target on the legs, causing pain but not injury.

From 1970 to 1975, about 55,000 rubber bullets are fired by the British Army in Northern Ireland. Often they are fired directly at people from close range, which results in three people being killed and many more badly injured. In 1975, they are replaced by plastic bullets. In Northern Ireland over 35 years (1970–2005), about 125,000 rubber and plastic bullets are fired – an average of ten per day – causing 17 deaths.

The baton round is made available to British police forces outside Northern Ireland from 2001. In 2013 however, Ministry of Defence papers declassified from 1977 reveal it is aware rubber bullets are more dangerous than was publicly disclosed. The documents contain legal advice for the Ministry of Defence to seek a settlement over a child who had been blinded in 1972, rather than go to court which would expose problems with the bullets and make it harder to fight future related cases. The papers state that further tests would reveal serious problems with the bullets, including that they were tested “in a shorter time than was ideal”, that they “could be lethal” and that they “could and did cause serious injuries.”