The Ulster Special Constabulary (USC), a quasi-military reserve special constable police force in Northern Ireland commonly called the “B-Specials” or “B Men,” is disbanded on April 30, 1970 following the release of the Hunt Report.

The USC is set up in October 1920, shortly before the partition of Ireland. It is an armed corps, organised partially on military lines and called out in times of emergency, such as war or insurgency. It performs this role most notably in the early 1920s during the Irish War of Independence (1920-22) and the Irish Republican Army (IRA) Border Campaign (1956-1962).

During its existence, 95 USC members are killed in the line of duty. Seventy-two of these are killed in conflict with the IRA in 1921 and 1922. Another eight die in air raids or IRA attacks during World War II. Of the remainder, most die in accidents but two former officers are killed during the Troubles in the 1980s.

The force is almost exclusively Ulster Protestant and as a result is viewed with great mistrust by Catholics. It carries out several revenge killings and reprisals against Catholic civilians during the Irish War of Independence. Unionists generally support the USC as contributing to the defence of Northern Ireland from subversion and outside aggression.

The abolition of the B Specials is a central demand of the Northern Ireland civil rights movement in the late 1960s. On April 30, 1970, the USC is finally stood down as a result of the Hunt Report, produced by a committee headed by John Hunt, Baron Hunt in 1969. Hunt concludes that the perceived bias of the Special Constabulary, whether true or not, has to be addressed. One of his other major concerns is the use of the police force for carrying out military style operations.

It has been argued that the USC’s failure to deal with the 1969 disturbances were due to a failure on behalf of the Northern Ireland government to modernise their equipment, weaponry, training and approach to the job. Upon the disbandment of the USC, many of its members join the newly established Ulster Defence Regiment (UDR), the part-time security force which replaces the B Specials. Unlike the Special Constabulary, the UDR is placed under military control. Other B Specials join the new part-time Reserve of the Royal Ulster Constabulary (RUC). The USC continues to do duties for a month after the formation of the UDR and RUC Reserve to allow both of the new forces time to consolidate.

In the final handover to the Ulster Defence Regiment, the B Specials have to surrender their weapons and uniforms. Despite the government’s concerns about the handover of weapons and equipment, every single uniform and every single weapon is surrendered.

After implementation of the Hunt report, the last night of duties for most B Men is March 31, 1970. On April 1, 1970 the Ulster Defence Regiment begins duties. Initially, the Regiment has 4,000 members who work part-time while the new special constabulary, the RUC Reserve which replaces the B-Specials, initially consists of 1,500 members.

Since disbandment the USC has assumed a place of “almost mythic proportions” within unionist folklore, whereas in the Nationalist community they are still reviled as the Protestant only, armed wing of the unionist government “associated with the worst examples of unfair treatment of Catholics in Northern Ireland by the police force.” An Orange Order lodge is formed to commemorate the disbandment of the force called “Ulster Special Constabulary LOL No. 1970.” An Ulster Special Constabulary Association is also set up soon after the disbandment. 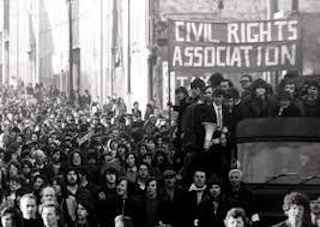 The Northern Ireland Civil Rights Association (NICRA), an organisation that campaigns for civil rights in Northern Ireland during the late 1960s and early 1970s, is formed in Belfast on April 9, 1967. The civil rights campaign attempts to achieve reform by publicising, documenting, and lobbying for an end to discrimination in areas such as elections (which are subject to gerrymandering and property requirements), discrimination in employment, in public housing and alleged abuses of the Special Powers Act.

The genesis of NICRA lay in a meeting in Maghera in August 1966 between the Wolfe Tone Societies which is attended by Cathal Goulding, then chief of staff of the Irish Republican Army (IRA). During its formation, NICRA’s membership extends to trade unionists, communists, liberals, socialists, with republicans eventually constituting five of the thirteen members of its executive council. The organisation initially also has some unionists, with Young Unionist Robin Cole taking a position on its executive council. Official Sinn Féin and Official Irish Republican Army influence over NICRA grows in later years, but only as the latter’s importance declines, when violence escalated between late 1969 until 1972, when NICRA ceased its work.

Events escalate in Northern Ireland until August 1969, when the annual Apprentice Boys of Derry march is attacked as it marches through the city’s walls and past a perimeter with the nationalist Bogside. Initially some loyalist supporters throw pennies down from the walls onto Catholics in the Bogside. Catholics then throw nails and stones at loyalists leading to an intense confrontation. The Royal Ulster Constabulary (RUC) intervenes, and a three-day riot known as the Battle of the Bogside ensues. Rioting quickly spreads throughout nationalist areas in Northern Ireland, where at least seven are killed and hundreds wounded. Thousands of Catholics are driven from their homes by loyalists. These events are often seen as the start of the Troubles.

In a subsequent official inquiry, Lord Leslie Scarman concludes, “We are satisfied that the spread of the disturbances [in Derry in August 1969] owed much to a deliberate decision of some minority groups to relieve police pressure on the rioters in Londonderry. Amongst these groups must be included NICRA, whose executive decided to organise demonstrators in the Province so as to prevent reinforcement of the police in Londonderry.” In December 1969 and January 1970, both Sinn Féin and the IRA split into “Official” and “Provisional” wings, with the “Official” wings retaining influence in NICRA.

The British government introduces internment on August 9, 1971 at the request of Northern Ireland Prime Minister Brian Faulkner. The British Army, in co-operation with the RUC, intern 342 people. One hundred sixteen of those interned are innocent of involvement with the IRA and are quickly released.

The introduction of internment is not a closely guarded secret, with newspaper editorials appearing and discussion on television. The IRA goes underground or flees across the border. As a result, fewer than 100 arrests are from the IRA. By this stage, support for NICRA begins to wane, however NICRA continues to organise anti-internment marches. In Derry on January 30, 1972 NICRA takes part in a mass anti-internment march which had also been banned. Fourteen unarmed demonstrators are shot and killed by British troops during the march which becomes known as Bloody Sunday. 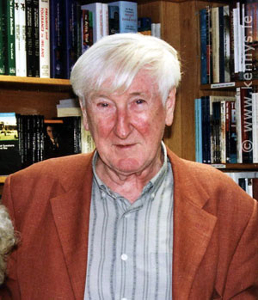 Irish poet John Montague is born on Bushwick Avenue at St. Catherine’s Hospital in Brooklyn, New York City, New York, on February 28, 1929. His father, James Montague, an Ulster Catholic, from County Tyrone, had come to the United States in 1925.

Life in New York is difficult during the Great Depression, so John and his two brothers are shipped back to Ireland in 1933. The two eldest are sent to their maternal grandmother’s house in Fintona, County Tyrone, but John is sent to his father’s ancestral home at Garvaghey, then maintained by two spinster aunts.

John studied at University College Dublin in 1946. Stirred by the example of other student poets he begins to publish his first poems in The Dublin Magazine, Envoy, and The Bell, edited by Peadar O’Donnell. But the atmosphere in Dublin is constrained and he leaves for Yale University on a Fulbright Fellowship in 1953.

A year of graduate school at University of California, Berkeley convinces Montague that he should return to Ireland. He settles in Dublin working at the Irish Tourist Office. In 1961 he moves to Bray, County Wicklow. A regular rhythm of publication sees his first book of stories, Death of a Chieftain (1964) after which the musical group The Chieftains is named, his second book of poems, A Chosen Light (1967), Tides (1970).

All during the 1960s, Montague continues to work on his long poem, The Rough Field, a task that coincides with the outbreak of the Northern Ireland civil rights movement. A Patriotic Suite appears in 1966, Hymn to the New Omagh Road and The Bread God in 1968, and A New Siege, dedicated to Bernadette Devlin which he reads outside Armagh Jail in 1970.

Montague settles in Cork in 1974 and publishes an anthology, the Faber Book of Irish Verse (1974) with a book of lyrics, A Slow Dance (1975). Recognition is now beginning to come, with the award of the Irish American Cultural Institute in 1976, the first Marten Toonder Award in 1977, and the Alice Hunt Bartlett Award for The Great Cloak in 1978.

In 1987, Montague is awarded an honorary doctor of letters by the State University of New York at Buffalo. He serves as distinguished writer-in-residence for the New York State Writers Institute during each spring semester, teaching workshops in fiction and poetry and a class in the English Department of the University at Albany. In 1998, he is named the first Irish professor of poetry, a three-year appointment to be divided among Queen’s University Belfast, Trinity College Dublin, and University College Dublin. In 2008, he publishes A Ball of Fire, a collection of all his fiction including the short novella The Lost Notebook.

John Montague dies at the age of 87 in Nice, France on December 10, 2016 after complications from a recent surgery.