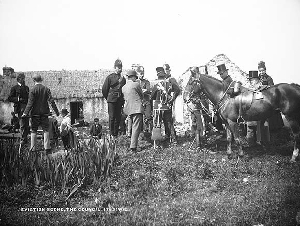 The Tenant Right League, an organisation which aims to secure reforms in the Irish land system, is founded in Dublin on August 9, 1850, at a meeting attended by representatives of the Tenant Protection Societies. Formed by Charles Gavan Duffy and Frederick Lucas, the League unites for a time Protestant and Catholic tenants, Duffy calling his movement The League of North and South.

The political background to the movement is the Encumbered Estates Act and the resultant change in land ownership at landlord level. In the North of Ireland, Protestant and Presbyterian ministers fear that the new landlords will destroy the “Ulster custom” of tenancy, which compensates tenants for any improvement undertaken. Concurrently, in the South of Ireland politically minded young Catholic priests are agitating for the adoption there of the Ulster custom as a measure of reform.

Support for the League initially comes from the Ulster Tenant Right Association led by William Sharman Crawford. The support is short-lived because of the involvement of Catholic clergymen from the south. As a constitutional movement, the League seeks to secure the adoption and enforcement of the Three Fs, namely fair rent, fixity of tenure, and free sale. All of these would aid Irish tenant farms, all of whom lack them.

For the larger tenant farmers fixity of tenure is the priority. On the other hand the league never has the support of smaller tenants, whose prime concern is fair rents. The founders strive to establish a parliamentary party of Irish members who will oppose any government not prepared to grant “Tenant-right” also known as the Ulster Custom.

The Tenant Right League meets with considerable success under its national organiser, John Martin. It has the support of the surviving members of the Repeal Association in the British House of Commons as well as a number of English Radicals. It is agreed, all around, that a Land Act embodying the three F’s would be a real gain. In the 1852 general election, some fifty Tenant Right candidates, including Gavan Duffy, Lucas and John Sadleir, are returned to parliament, where they sit as the Independent Irish Party.

The League’s success is short lived and is ultimately destroyed and weakened when a number of prominent members break away and established the Catholic Defence Association. Supporters of the league are also intimidated by hostile landlords. The most serious blows to its success come when Lucas decides to take his complaint about the Archbishop of Dublin Paul Cullen to Rome, which alienates clerical support. Lucas dies in October 1855 shortly after the failure of his mission, a month later Gavan Duffy emigrates to Australia.

The League finally dissolves in 1859, and the Independent Irish Party disappears by 1860. The demand for tenants rights is however continued by Bishop Thomas Nulty of County Meath and taken up again as a popular cause by the Irish National Land League in 1879, when the “Three Fs” are anchored in the Land Law (Ireland) Act 1881, previously pursued rigorously by Michael Davitt.