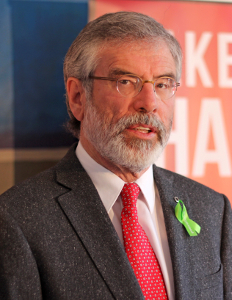 Gerard “Gerry” Adams, Irish republican politician who is the president of the Sinn Féin political party and a Teachta Dála (TD) for Louth since the 2011 general election, is born in Belfast, Northern Ireland, on October 6, 1948.

Adams attends St. Finian’s Primary School on the Falls Road, where he is taught by La Salle brothers. Having passed the eleven-plus exam in 1960, he attends St. Mary’s Christian Brothers Grammar School. He leaves St. Mary’s with six O-levels and becomes a barman. He is increasingly involved in the Irish republican movement, joining Sinn Féin and Fianna Éireann in 1964, after being radicalised by the Divis Street riots during that year’s general election campaign.

In the late 1960s, a civil rights campaign develops in Northern Ireland. Adams is an active supporter and joins the Northern Ireland Civil Rights Association in 1967. However, the civil rights movement is met with violence from loyalist counter-demonstrations and the Royal Ulster Constabulary. In August 1969, Northern Ireland cities like Belfast and Derry erupt in major rioting.

During the 1981 hunger strike, which sees the emergence of Sinn Féin as a political force, Adams plays an important policy-making role. In 1983, he is elected president of Sinn Féin and becomes the first Sinn Féin MP elected to the British House of Commons since Philip Clarke and Tom Mitchell in the mid-1950s. From 1983 to 1992 and from 1997 to 2011, he is an abstentionist Member of Parliament (MP) of the British Parliament for the Belfast West constituency.

Adams has been the president of Sinn Féin since 1983. Since that time the party has become the third-largest party in the Republic of Ireland, the second-largest political party in Northern Ireland and the largest Irish nationalist party in that region. In 1984, Adams is seriously wounded in an assassination attempt by several gunmen from the Ulster Defence Association (UDA), including John Gregg. From the late 1980s onwards, Adams is an important figure in the Northern Ireland peace process, initially following contact by the then-Social Democratic and Labour Party (SDLP) leader John Hume and then subsequently with the Irish and British governments.

In 1986, Sinn Féin, under Adams, changes its traditional policy of abstentionism towards the Oireachtas, the parliament of the Republic of Ireland, and later takes seats in the power-sharing Northern Ireland Assembly. In 2005, the Provisional Irish Republican Army (IRA) states that its armed campaign is over and that it is exclusively committed to democratic politics.

In 2014, Adams is held for four days by the Police Service of Northern Ireland for questioning in connection with the abduction and murder of Jean McConville in 1972. He is freed without charge and a file is sent to the Public Prosecution Service for Northern Ireland, which later states there is insufficient evidence to charge him.

In September 2017, Adams says Sinn Féin will begin a “planned process of generational change” after its November ardfheis and will allow his name to go forward for a one year term as Uachtaran Shinn Fein (President Sinn Fein).