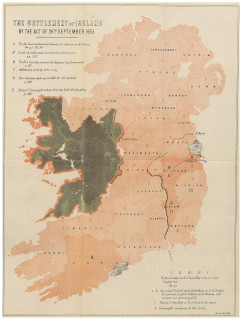 The last major body of Irish Catholic troops under Phillip O’Reilly surrender to the Cromwellian conquest of Ireland at Cloughoughter in County Cavan on April 27, 1653. This marks the end of the Irish Confederate Wars which began in 1641.

Colonel Philip O’Reilly is a member of parliament (MP) for County Cavan in the Parliament of Ireland from 1639 to 1641, and a leading member of the Irish Rebellion of 1641.

O’Reilly’s father, grandfather and several other ancestors are chiefs of the O’Reilly clan and Lords of Breifne O’Reilly. His mother is Catherine MacMahon. He resides at Bellanacargy Castle in the barony of Tullygarvey, near to present day village of Drung. Bellanacargy castle, anciently referred to as Ballynacarraig because it was built on a carraig (rock island) situated in the middle of the River Annalee, is destroyed in May 1689 by Williamite forces led by Thomas Lloyd.

As a young man O’Reilly serves for some time in the Spanish army but returns to Ireland. He is appointed Commissioner of the Peace in 1625 and High Sheriff of Cavan in 1629. He is elected as MP for County Cavan in 1639.

During the Parliamentary session of 1640 O’Reilly is enlisted by Rory O’Moore in the plot to start a rebellion against English rule in Ireland. O’Moore is a distant relation as his sister Cecilia O’Moore is married to O’Reilly’s first cousin, Tirlagh O’Neill. On the outbreak of the Irish Rebellion in October 1641 he is elected chief of the O’Reillys. As a result, the Irish Parliament expels him on November 16, 1641. On November 6, 1641 he orders a general gathering of his clansmen from 16 to 60 years of age, to be held at Virginia, and on December 11, 1641 he has possession of the whole county, except the Killeshandra castles of Keelagh and Croghan which are defended by Sir Francis Hamilton and Sir James Craig. He raises a brigade of twelve hundred men, composed chiefly of his name and family, and serves with distinction as lieutenant-general in the service of the Confederate Catholics of Ireland. The Assembly of Kilkenny appoints him Lord President of Ulster. His second cousin Myles O’Reilly is High Sheriff of Cavan in 1641 at the outbreak of the Rebellion.

O’Reilly is detained for treason by the English government in 1642. In his diary for June 3, 1644, the historian Sir James Ware II states, “Intelligence came to Dublin that Roger Moore and Philip O’Reilly, two of the first incendiaries were committed to prison at Kilkenny.” O’Reilly is further denounced by the Act for the Settlement of Ireland 1652 at the end of the rebellion. Following the collapse of the Irish confederacy, he formally surrenders to Oliver Cromwell at Cloughoughter Castle on April 27, 1653, being the last Irish garrison to do so. He secures favourable terms and is obliged to leave Ireland. He retires with his brigade into Spain and thence to the Netherlands, where he serves in the Spanish army for about two years and dies in 1655. He is buried in the Irish monastery of St. Dominick in Leuven, Belgium.