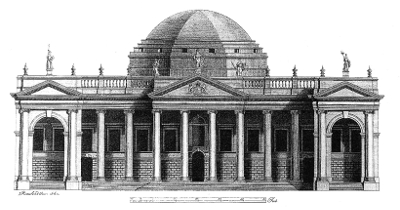 The building is home to the two Houses of Parliament, serving as the seat of both chambers, the House of Lords and House of Commons, of the Parliament of the Kingdom of Ireland for most of the 18th century until that parliament is abolished by the Acts of Union 1800, when Ireland becomes part of the United Kingdom of Great Britain and Ireland.

In the 17th century, parliament settles at Chichester House, a town house in Hoggen Green (later College Green) formerly owned by Sir George Carew, Lord President of Munster and Lord High Treasurer of Ireland, which had been built on the site of a nunnery disbanded by King Henry VIII at the time of the dissolution of the monasteries. Carew’s house, named Chichester House after its later owner Sir Arthur Chichester, is a building of sufficient importance to have become the temporary home of the Kingdom of Ireland’s law courts during the Michaelmas law term in 1605. Most famously, the legal documentation facilitating the Plantation of Ulster is signed there on November 16, 1612.

Chichester House is in a dilapidated state, allegedly haunted and unfit for official use. In 1727 parliament votes to spend £6,000 on a new building on the site. It is to be the world’s first purpose-built two-chamber parliament building.

The then ancient Palace of Westminster, the seat of the English before 1707 and, later, British Parliament, is a converted building. The House of Commons‘s odd seating arrangements are due to the chamber’s previous existence as a chapel. Hence MPs face each other from former pews.

The design of the new building, one of two purpose-built Irish parliamentary buildings (along with Parliament Buildings, Stormont), is entrusted to an architect, Edward Lovett Pearce, who is a member of parliament and a protégé of the Speaker of the Irish House of Commons, William Conolly of Castletown House. During construction, Parliament moves into the Blue Coat Hospital on Dublin‘s Northside.

The original, domed House of Commons chamber is destroyed by fire in the 1790s, and a less elaborate new chamber, without a dome, is rebuilt in the same location and opened in 1796, four years before the Parliament’s ultimate abolition.

Pearce’s designs come to be studied and copied both at home and abroad. The Viceregal Apartments in Dublin Castle imitate his top-lit corridors. The British Museum in Bloomsbury in London copies his colonnaded main entrance. His impact reaches Washington, D.C., where his building, and in particular his octagonal House of Commons chamber, is studied as plans are made for the United States Capitol building. While the shape of the chamber is not replicated, some of its decorative motifs are, with the ceiling structure in the Old Senate Chamber and old House of Representatives chamber (now the National Statuary Hall) bearing a striking resemblance to Pearce’s ceiling in the House of Commons.

(Pictured: Architectural drawing of the front of Parliament House by Peter Mazell based on the drawing by Rowland Omer, 1767)