Edmund Sexton Pery, 1st Viscount Pery, Irish politician who served as Speaker of the Irish House of Commons between 1771 and 1785, is born in Limerick, County Limerick on April 8, 1719.

Pery is born into one of Limerick’s most politically influential families, elder son of the Rev. Stackpole Pery and Jane Twigge. His maternal grandfather is William Twigg, Archdeacon of Limerick.

A trained barrister, Pery becomes a member of the Irish House of Commons for the Wicklow Borough constituency in 1751. On the dissolution of the house following the death of George II, he is elected for the constituency of Limerick City and serves from 1761 until 1785, becoming Speaker of the House in 1771. In 1783, he stands also for Dungannon, however chooses to sit for Limerick City. He is considered one of the most powerful politicians in Ireland in his time, leading a faction which includes his nephew, the future Earl of Limerick, and his relatives by marriage, the Hartstonges. Following his resignation, he is created Viscount Pery, of Newtown Pery, near the City of Limerick, in the Peerage of Ireland, entitling him to a seat in the Irish House of Lords. As he has no male heirs, his title becomes extinct on his death on February 24, 1806.

Pery is also noted for his part in the history of the architecture of Limerick. In 1765, he commissions the engineer Davis Ducart to design a town plan for land that he owns on the southern edge of the existing city, which leads to the construction of the Georgian area of the city later known as Newtown Pery. He is also commemorated in the naming of Pery Square.

Pery marries Patricia (Patty) Martin of Dublin in 1756, who dies a year later, and secondly Elizabeth Vesey, daughter of John Vesey, 1st Baron Knapton, and Elizabeth Brownlow. He and Elizabeth have two daughters:

Pery’s younger brother, William, is a leading figure in the Church of Ireland, becoming Bishop of Killala and Achonry and subsequently Bishop of Limerick, Ardfert and Aghadoe, and also ennobled as Baron Glentworth. William’s son, Edmund, is made Earl of Limerick in 1803 as a result of his support for the Act of Union. Pery’s younger sister is Lucy Hartstonge, the founder of what is now St. John’s Hospital, Limerick.

The building is home to the two Houses of Parliament, serving as the seat of both chambers, the House of Lords and House of Commons, of the Parliament of the Kingdom of Ireland for most of the 18th century until that parliament is abolished by the Acts of Union 1800, when Ireland becomes part of the United Kingdom of Great Britain and Ireland.

In the 17th century, parliament settles at Chichester House, a town house in Hoggen Green (later College Green) formerly owned by Sir George Carew, Lord President of Munster and Lord High Treasurer of Ireland, which had been built on the site of a nunnery disbanded by King Henry VIII at the time of the dissolution of the monasteries. Carew’s house, named Chichester House after its later owner Sir Arthur Chichester, is a building of sufficient importance to have become the temporary home of the Kingdom of Ireland’s law courts during the Michaelmas law term in 1605. Most famously, the legal documentation facilitating the Plantation of Ulster is signed there on November 16, 1612.

Chichester House is in a dilapidated state, allegedly haunted and unfit for official use. In 1727 parliament votes to spend £6,000 on a new building on the site. It is to be the world’s first purpose-built two-chamber parliament building.

The then ancient Palace of Westminster, the seat of the English before 1707 and, later, British Parliament, is a converted building. The House of Commons‘s odd seating arrangements are due to the chamber’s previous existence as a chapel. Hence MPs face each other from former pews.

The design of the new building, one of two purpose-built Irish parliamentary buildings (along with Parliament Buildings, Stormont), is entrusted to an architect, Edward Lovett Pearce, who is a member of parliament and a protégé of the Speaker of the Irish House of Commons, William Conolly of Castletown House. During construction, Parliament moves into the Blue Coat Hospital on Dublin‘s Northside.

The original, domed House of Commons chamber is destroyed by fire in the 1790s, and a less elaborate new chamber, without a dome, is rebuilt in the same location and opened in 1796, four years before the Parliament’s ultimate abolition.

Pearce’s designs come to be studied and copied both at home and abroad. The Viceregal Apartments in Dublin Castle imitate his top-lit corridors. The British Museum in Bloomsbury in London copies his colonnaded main entrance. His impact reaches Washington, D.C., where his building, and in particular his octagonal House of Commons chamber, is studied as plans are made for the United States Capitol building. While the shape of the chamber is not replicated, some of its decorative motifs are, with the ceiling structure in the Old Senate Chamber and old House of Representatives chamber (now the National Statuary Hall) bearing a striking resemblance to Pearce’s ceiling in the House of Commons.

(Pictured: Architectural drawing of the front of Parliament House by Peter Mazell based on the drawing by Rowland Omer, 1767) 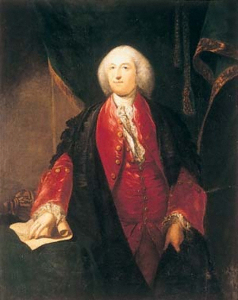 John Ponsonby, Irish politician styled The Honourable from 1724, is unanimously re-elected Speaker of the Irish House of Commons on October 22, 1761.

Ponsonby is born on March 29, 1713, the second son of Brabazon Ponsonby, 1st Earl of Bessborough. In 1739, he enters the Irish House of Commons for Newtownards, becoming its speaker in 1756. He also serves as First Commissioner of the Revenue and he becomes a member of the Privy Council of Ireland in 1746. In 1761, he is elected for Kilkenny County and Armagh Borough, and sits for the first. In 1768, he stands also for Gowran and Newtownards, and in 1776 for Carlow Borough, but chooses each time Kilkenny County, which he represents until 1783. Subsequently Ponsonby is again returned for Newtownards and sits for this constituency until his death in 1787.

Belonging to one of the great families which at this time monopolizes the government of Ireland, Ponsonby is one of the principal “undertakers,” men who control the whole of the king’s business in Ireland, and he retains the chief authority until George Townshend, 1st Marquess Townshend, becomes lord-lieutenant in 1767. A struggle for supremacy follows between the Ponsonby faction and the party dependent on Townshend, one result of this being that Ponsonby resigns the speakership in 1771.

In 1743, Ponsonby marries Lady Elizabeth Cavendish, daughter of William Cavendish, 3rd Duke of Devonshire, a connection which is of great importance to the Ponsonbys. His older brother, William Ponsonby, 2nd Earl of Bessborough, had married the Duke’s eldest daughter in 1739. His sons, William Ponsonby, 1st Baron Ponsonby of Imokilly, and George Ponsonby, are also politicians of distinction. His daughter Catherine marries Richard Boyle, 2nd Earl of Shannon, and is mother to Henry Boyle, 3rd Earl of Shannon.