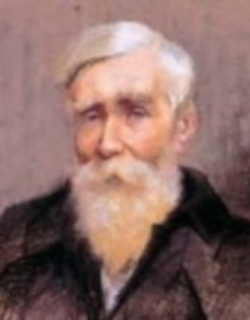 John Kells Ingram, economist and poet who starts his career as a mathematician, is born into an Ulster Scots family on July 7, 1823 at the Rectory of Templecarne (Aghnahoo), just south of Pettigo, County Donegal. He has been co-credited, along with John William Stubbs, with introducing the geometric concept of inversive geometry.

Ingram enters Trinity College, Dublin on October 13, 1837. He is elected a Scholar of Trinity College in 1840, graduates with a BA in mathematics in 1842, and is awarded an MA in 1850. In 1852 he becomes a professor of oratory at Trinity and writes extensively on Shakespeare. He shows considerable promise in both mathematics and classics and achieves early popularity as a poet. He has a distinguished career at Trinity, spanning over fifty-five years, as a student, fellow and professor, successively of Oratory, English Literature, Jurisprudence and Greek, subsequently becoming the College Librarian and ultimately its Vice Provost.

One evening in March 1843 Ingram writes a poem for which he is best remembered, a political ballad called “The Memory of the Dead” in honour of the Irish Rebellion of 1798 led by the Society of United Irishmen. The poem is published anonymously on April 1, 1843 in Thomas Davis‘s The Nation newspaper although its authorship is an open secret in Dublin. It is set to music for voice and piano in 1845 by John Edward Pigot and becomes a popular Irish nationalist anthem. It is one of the best-known of Irish Republican songs and is often played by the piper at Republican funerals.

In 1847 Ingram helps to found the Statistical and Social Inquiry Society of Ireland. His early economic writings deal mainly with the Poor Law, which in theory is supposed to provide relief for the poor but in reality does little to alleviate the distress in Ireland. Strongly influenced by the French sociologist Auguste Comte, he rejects the more isolated approach of classical economics which builds on the assumption that people try to do the best they can. Instead he seeks to develop a unified theory of economics along the lines of Comtean positivist philosophy, which seeks ways for economic policies to contribute to the good of society. His writings on this topic include the essay “Present Position and Prospects of Political Economy” (1878) and A History of Political Economy (1888).

John Kells Ingram dies on May 1, 1907 in his home at 38 Upper Mount Street, Dublin, where he had lived since 1884. He is buried in Mount Jerome Cemetery.