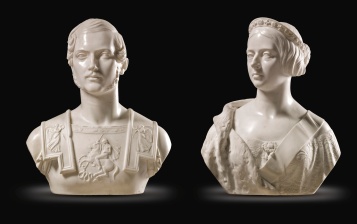 , noted Irish civil engineer and sculptor in Dublin and London, is born in Dublin on May 2, 1806.

Jones is the son of miniature painter Edward Jones. Under the identity of “J. Jones,” architect, 7 Amiens Street, North Strand, Dublin, he exhibits several watercolors at the Royal Hibernian Academy in 1828 and 1829, including his View of the Town of Youghall, showing the proposed Chain Bridge (1828) and Design for a Viaduct (1829). He studies engineering under Alexander Nimmo, and works for him on major engineering projects in Ireland including the building of the bridge at Waterford from 1829-1832, which he directs. He is listed as a civil engineer in Wilson’s Dublin Directory for the years 1833-35 with an office address at the Commercial Buildings, Dame Street. In 1839, he is awarded a Telford Medal in silver and 20 guineas for his paper and drawings on the sewage in Westminster.

In 1840, Jones ceases his engineering practice to become a sculptor in London, with considerable success, particularly in portrait busts of notables. Among his sitters are Queen Victoria, Albert, Prince Consort, Louis-Philippe, Napoleon III, the Duke of Cambridge, the Duke of Wellington, Lord Brougham, the Earl of Clarendon, Lord Palmerston, Daniel O’Connell, and Lord Gough. Among his few full-length statues is one of Sir R. Ferguson at Londonderry. He exhibits at the Royal Academy of Arts from 1854-1862.

Jones dies on July 25, 1862 while visiting Finglas, near Dublin, and is buried in Mount Jerome Cemetery.