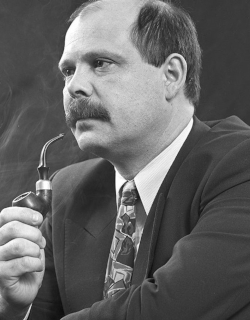 David Ervine, Northern Irish Unionist politician from Belfast and the leader of the Progressive Unionist Party (PUP), dies on January 8, 2007, following a massive heart attack, a stroke and brain hemorrhage.

Ervine is born into a Protestant working-class family in east Belfast on July 21, 1953. He leaves Orangefield High School at age 14 and joins the Orange Order at age 18, however his membership does not last long. The following year he joins the Ulster Volunteer Force (UVF), believing this to be the only way to ensure the defence of the Protestant community after the events of Bloody Friday.

Ervine is arrested in November 1974, while an active member of the UVF. He is driving a stolen car containing five pounds of commercial explosives, a detonator and fuse wire. After seven months on remand in Crumlin Road Gaol he is found guilty of possession of explosives with intent to endanger life. He is sentenced to 11 years and imprisoned in The Maze.

While in prison, Ervine comes under the influence of Gusty Spence who makes him question what his struggle is about and unquestionably changes Ervine’s direction. After much study and self-analysis, he emerges with the view that change through politics is the only option. He also becomes friends with Billy Hutchinson while in prison.

Ervine suffers a massive heart attack, a stroke and brain haemorrhage after attending a football match between Glentoran F.C. and Armagh City F.C. at The Oval in Belfast on Saturday January 6, 2007. He is taken to the Ulster Hospital in Dundonald and is later admitted to the Royal Victoria Hospital in Belfast, where he dies on Monday, January 8, 2007. His body is cremated at Roselawn Crematorium after a funeral service on January 12 in East Belfast attended by Mark Durkan, Gerry Adams, Peter Hain, Dermot Ahern, Hugh Orde and David Trimble among others.

A Provisional Irish Republican Army (PIRA) incendiary device explodes at the La Mon entertainment complex in Comber, County Down, on February 17, 1978, killing twelve people and injuring thirty others. The blast has been described as “one of the worst atrocities” of the Troubles.

Since the beginning of its campaign, the IRA has carried out numerous attacks on economic targets, killing many members of the public in the process. The IRA’s goal is to harm the economy and cause disruption, which will put pressure on the British government to withdraw from Northern Ireland.

On February 17, 1978, an IRA unit plants an incendiary device attached to petrol-filled canisters on meat hooks outside the window of the Peacock Room in the restaurant of the La Mon House Hotel. The IRA often give bomb warnings in advance of destroying property but never when targeting the police or military. After planting the bomb, the IRA members attempt to send a warning from the nearest public telephone, but find that it has been vandalised. On the way to another telephone they are delayed again when forced to stop at an Ulster Defence Regiment (UDR) checkpoint. By the time they are able to send the warning, only nine minutes remain before the bomb detonates at 21:00. The blast creates a fireball, killing twelve people and injuring thirty more, many of whom are severely burned. Many of the injured are treated in the Ulster Hospital in nearby Dundonald. A 2012 news article claims that the IRA were targeting Royal Ulster Constabulary (RUC) officers they believed were meeting in the restaurant that night. The article claims that the IRA had gotten the wrong date and that the meeting of RUC officers had taken place exactly one week earlier.

The day after the explosion, the IRA admits responsibility and apologises for the inadequate warning. The hotel had allegedly been targeted by the IRA as part of its firebomb campaign against commercial targets. However, the resulting carnage brings quick condemnation from other Irish nationalists, with one popular newspaper comparing the attack to the 1971 McGurk’s Bar bombing. Sinn Féin president Ruairí Ó Brádaigh also strongly criticises the operation. In consequence of the botched attack, the IRA Army Council gives strict instructions to all units not to bomb buses, trains, or hotels.

A team of 100 RUC detectives is deployed in the investigation. As part of the investigation, 25 people are arrested in Belfast, including Gerry Adams. Adams is released from custody in July 1978. Two prosecutions follow. One Belfast man is charged with twelve murders but is acquitted. He is convicted of IRA membership but successfully appeals. In September 1981, another Belfast man, Robert Murphy, is given twelve life sentences for the manslaughter of those who died. Murphy is freed on licence in 1995. As part of their bid to catch the bombers, the RUC passes out leaflets which display a graphic photograph of a victim’s charred remains.

In 2012, a news article claims that two members of the IRA bombing team, including the getaway driver, are British double agents working for MI5. According to the article, one of the agents is Denis Donaldson. That year, Northern Ireland’s Historical Enquiries Team (HET) completes a report on the bombing. It reveals that important police documents, including interviews with IRA members, have been lost. A number of the victims’ families slam the report and call for a public inquiry. They claim the documents had been removed to protect certain IRA members. Unionist politician Jim Allister, who has been supporting the families, says, “There is a prevalent belief that someone involved was an agent and that is an issue around which we need clarity.”