Irish playwright Marina Carr is born in Dublin on November 17, 1964. She has written almost thirty plays, including By the Bog of Cats (1998) which is revived at the Abbey Theatre in 2015.

Carr spends the majority of her childhood in Pallas Lake, County Offaly, adjacent to the town of Tullamore. Her father, Hugh Carr, is a playwright and studies music under Frederick May, while her mother, Maura Eibhlín Breathnach, is the principal of the local school and writes poetry in Irish. It is said that “there were a lot of literary rivalries.” As a child, she and her siblings build a theater in their shed.

Carr attends University College Dublin (UCD), studying English and philosophy. She graduates in 1987. In 2011, she receives an honorary degree of Doctorate of Literature from her alma mater.

Carr has held posts as writer-in-residence at the Abbey Theatre and has taught at Trinity College Dublin, Princeton University, and Villanova University. She lectures in the English department at Dublin City University in 2016. She is considered one of Ireland’s most prominent playwrights and is a member of Aosdána.

The Mai wins the Dublin Theatre Festival‘s Best New Irish Play award (1994-1995) and Portia Coughlan wins the nineteenth Susan Smith Blackburn Prize (1996-1997). Other awards include The Irish Times Playwright award 1998, the E. M. Forster Award from the American Academy of Arts and Letters and The American Ireland Fund Award, the Macaulay Fellowship and The Hennessy Award. Carr is named a recipient of the Windham-Campbell Literature Award, administered by the Beinecke Rare Book & Manuscript Library at Yale University. The award, which includes a financial prize of $165,000 (or €155,000), is formally presented in September 2017. She is the second Irish author to receive the prize, following playwright Abbie Spallen in 2016.

On April 19, 2003, Bono, the lead singer of the Irish rock band U2, surpasses competition from British Prime Minister Tony Blair and French President Jacques Chirac to become Europe’s greatest hero. Already laden down with similar honours, he is picked by online voters from a list of 36 other Europeans compiled by the prestigious Time magazine.

Bono’s work for the starving starts with Band Aid in 1984 but develops over the years into a crusade lobbying world leaders and trying to reduce Third World debt.

Able to open any door from the Vatican to the White House, Bono in 2003 alone is nominated for a second successive Nobel Peace Prize, receives the French Legion of Honour and an international humanitarian award from the American Ireland Fund.

“There are potentially another ten Afghanistans in Africa and it is cheaper by a factor of 100 to prevent the fires from happening than to put them out. Look, I know how absurd it is to have a rock star talk about debt relief or HIV/AIDS in Africa. But if not me, who?” Bono says.

Caoimhe Butterly, a 24-year-old from Dublin, is also nominated by Time editors for her role as a peace activist, which resulted in her being shot at by Israeli troops. “I don’t really think the concept of heroes is helpful, but if my inclusion helps highlight the cause of people struggling against oppression, then it’s of some good,” Butterly says. She expects to go to Iraq in the near future “to further the struggle against oppression.”

The third Irish person on the list is 58-year-old Christina Noble whose torrid childhood leads her to work on behalf of impoverished street children in Asia. She survives tuberculosis, hunger, homelessness, beatings, molestation by relatives, institutionalisation and a gang rape. She starts her foundation‘s work in Vietnam in 1989 and Mongolia in 1997.

In Vietnam, where she is known fondly as Mama Tina, her foundation has 50 projects providing education, food and clean water for children. “We’re tools. We help a little. You don’t need brains or brawn to do that. You just need the heart of a survivor,” Noble says. 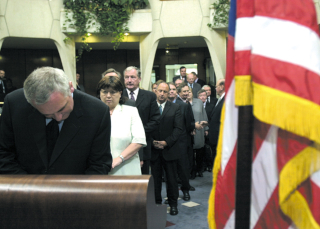 The Irish government declares a National Day of Mourning on September 14, 2001. Schools, businesses, and shops are shut down in an unprecedented gesture of sympathy following the attack on the World Trade Center in New York City three days earlier.

Thousands of people queue for hours in front of the United States Embassy in Ballsbridge, Dublin, waiting patiently to sign one of the many books of condolences to be presented to the U.S. government in the aftermath of the attack. At John F. Kennedy’s ancestral home in Dunganstown, County Wexford, the U.S. flag flies at half-mast and the house is closed to visitors.

As it was on the day that Kennedy was assassinated, everyone remembers where they were on September 11. But on September 14 in Ireland, the churches are full and the offices, shops and pubs dark and silent as the country mourns with its American relatives, colleagues and friends.

Bouquets of flowers, teddy bears, candles and messages are left at the Embassy, as thousands stand with heads bowed. The building’s facade is turned into a shrine to those who died in New York, Washington, D.C. and Pennsylvania. There are both tears and applause when 250 firefighters from all over Ireland parade past the Embassy as a mark of respect to the hundreds of firefighters lost in New York. People weep openly as they hear of the casualties and more details emerge of that terrible morning.

The nation prays as industrial and commercial life comes to a halt and offices, government departments and all places of entertainment close for mourning. In every parish and diocese religious services are held, with the biggest, an ecumenical service in Dublin, attended by Taoiseach Bertie Ahern, President Mary McAleese and many other cabinet members. At least 2,000 people attempt to squeeze into St. Mary’s Pro-Cathedral, which holds only 1,500. Outside, a group of U.S. students break into the American national anthem and the crowd falls silent.

The bells of Christ Church Cathedral ring muffled for 90 minutes to mark the occasion, and at 11:00 AM towns and villages fall silent as the people join in a European-wide three minutes of silence. At noon, all trains stop for five minutes and special services are held in practically every town in the country. In Bray, County Wicklow, so many people show up that the church runs out of communion. A number of people approaching the altar are given a blessing instead.

In Dublin’s universities in the months following the attacks, Irish students who were present in New York at the time are offered free counseling to help them deal with the “nightmares and flashbacks.”

A fund for the families of the victims started by Independent News and Media, which donates the money from the sales of all its newspapers on September 14, reaches more than 120,000 punts. It is given to The American Ireland Fund in the presence of U.S. Ambassador to Ireland, Richard Egan. Money is collected throughout the country for many months.

(From: “Ireland’s National Day of Mourning” by Irish America staff, http://www.irishamerica.com, December/January 2002 | Pictured: Taoisearch Bernie Ahern and Tanaiste Mary Harney with members of the Irish Cabinet sign the book of condolences in the U.S. Embassy in Dublin three days after the terrorist attacks)

Mary Patricia McAleese, Irish Independent politician who serves as the 8th President of Ireland from November 1997 to November 2011, is born in Belfast, Northern Ireland on June 27, 1951. She is the second female president and is first elected in 1997 succeeding Mary Robinson, making McAleese the world’s first woman to succeed another as president. She is re-elected unopposed for a second term in office in 2004 and is the first President of Ireland to have come from either Northern Ireland or Ulster.

Born Mary Patricia Leneghan, McAleese is the eldest of nine children in a Roman Catholic family. Her family is forced to leave the area by loyalists when The Troubles break out. Educated at St. Dominic’s High School, she also spends some time when younger with the Poor Clares, Queen’s University Belfast, from which she graduates in 1973, and Trinity College, Dublin. She is called to the Bar of Northern Ireland in 1974, and remains a member of the Bar Council of Ireland. She opposes abortion and divorce.

In 1975, McAleese is appointed Professor of Criminal Law, Criminology and Penology at Trinity College, Dublin and in 1987, she returns to her Alma Mater, Queen’s, to become Director of the Institute of Professional Legal Studies. In 1994, she becomes the first female Pro-Vice-Chancellor of Queen’s University. She works as a barrister and also works as a journalist with RTÉ.

McAleese uses her time in office to address issues concerning justice, social equality, social inclusion, anti-sectarianism and reconciliation. She describes the theme of her Presidency as “Building Bridges.” This bridge-building materialises in her attempts to reach out to the unionist community in Northern Ireland. These steps include celebrating The Twelfth at Áras an Uachtaráin and she even incurs criticism from some of the Irish Catholic hierarchy by taking communion in a Church of Ireland cathedral in Dublin. Despite being a practising Roman Catholic, she holds liberal views regarding homosexuality and women priests. She is a member of the Council of Women World Leaders and is ranked the 64th most powerful woman in the world by Forbes. In spite of some minor controversies, McAleese remains popular and her Presidency is regarded as successful.

On June 8, 2013, a ceremony is held to rename a bridge on the M1 motorway near Drogheda as the Mary McAleese Boyne Valley Bridge to honour McAleese’s contribution to the Northern Ireland peace process.