O’Conor is eldest son in the Roman Catholic family of Denis O’Conor of Bellanagare and Clonallis, County Roscommon, and Mary, daughter of Major Blake of Towerhill, County Mayo. A younger brother, Denis Maurice O’Conor (1840-1883), is a Liberal Party MP in the Home Rule interest for Sligo County (1868-83).

After his education at Downside School in England, O’Conor enters London University in 1855, but does not graduate. He enters public life at an early age, being elected MP for Roscommon as a Liberal Party candidate at a by-election in 1860. In 1874 he is returned as a home ruler but, refusing to take the party pledge exacted by Charles Stewart Parnell, is ousted by Irish nationalist journalist James O’Kelly in 1880. In 1883, he is defeated by William Redmond in a contest for MP representing Wexford Borough.

An active member of parliament, O’Conor is an effective though not an eloquent speaker and a leading exponent of Roman Catholic opinion. He frequently speaks on Irish education and land tenure. He criticises unfavourably the Queen’s Colleges established in 1845 and the model schools, and advocates separate education for Roman Catholics. In 1867 he introduces a measure to extend the Industrial Schools Act to Ireland, which becomes law the following year.

O’Conor opposes William Ewart Gladstone‘s Irish University Bill of 1873, and in May 1879 brings forward a measure, which has the support of almost every section of Irish political opinion, for the creation of a new examining university, St. Patrick’s, with power to make grants based on the results of examination to students of denominational colleges affiliated to it. This is withdrawn on July 23 on the announcement of the University Education (Ireland) Act 1879 creating the Royal University of Ireland.

O’Conor steadily lurges a reform of the Irish land laws. On social and industrial questions he also speaks with authority. From 1872 onwards he professes his adherence to home rule and supports Isaac Butt in his motion for inquiry into the parliamentary relations of Great Britain and Ireland in 1874. He also acts with the Irish leader in his endeavours to mitigate the severity of coercive legislation, though declaring himself not in all circumstances opposed to exceptional laws.

Following his parliamentary career in 1880, O’Conor is a member of the Registration of Deeds Commission of 1880, and takes an active part in the Bessborough land commission of the same year. He is a member of both the parliamentary committee of 1885 and the royal commission of 1894 on the financial relations between Great Britain and Ireland, and becomes chairman of the commission on the death of Hugh Culling Eardley Childers in 1896. He is also active in local government, presiding over parliamentary committees on Irish grand jury laws and land valuation in 1868 and 1869, and being elected to the first county council of Roscommon in 1898. He is Lord-Lieutenant of the county from 1888 until his death.

O’Conor is much interested in antiquarian studies. He serves for many years as president of the Antiquarian Society of Ireland, as well as of the Royal Irish Academy. He is president of the Irish Language Society, and procures the insertion of Irish language into the curriculum of the intermediate education board.

O’Conor dies at Clonalis House, Castlerea, County Roscommon, on June 30, 1906, and is buried in the new cemetery, Castlerea. 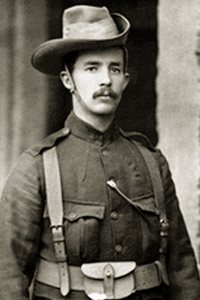 Robert Erskine Childers, British writer universally known as Erskine Childers and whose mother is from County Clare, is born on June 25, 1870 in Mayfair, London, England. His works include the influential novel The Riddle of the Sands. He is the second son of Robert Caesar Childers, a translator and oriental scholar from an ecclesiastical family, and Anna Mary Henrietta, née Barton, from an Anglo-Irish landowning family of Glendalough House, Annamoe, County Wicklow. He is also the cousin of Hugh Childers and Robert Barton, and the father of the fourth President of Ireland, Erskine Hamilton Childers.

Childers is raised at the home of family members at Glendalough, County Wicklow. At the recommendation of his grandfather, Canon Charles Childers, he is sent to Haileybury College. There he wins an exhibition to Trinity College, Cambridge, where he studies the classical tripos and then law. He distinguishes himself as the editor of Cambridge Review, the university magazine.

Childers’s first published work is some light detective stories he contributes to the Cambridge Review while he is editor. His first book is In the Ranks of the C. I. V., an account of his experiences in the Boer War, but he writes it without any thought of publication.

After serving in the British army during the Boer War he becomes an Irish nationalist. In 1914, Childers smuggles a cargo of 900 Mauser Model 1871 rifles and 29,000 black powder cartridges to the Irish Volunteers movement at the fishing village of Howth, County Dublin on his yacht, Asgard.

Though he serves as the principal secretary to Michael Collins and Arthur Griffith at the Anglo-Irish Treaty negotiations, Childers opposes the treaty, supporting the anti-treaty forces during the Irish Civil War. Childers is captured with a pistol by Free Staters in November 1922 shortly after the Free State has passed legislation making such possession a capital offence. Ironically, the revolver Childers possesses is a gift from former comrade Michael Collins, who led the Free State until his death in an ambush three months earlier.

Childers is put on trial by a military court on the charge of possessing a small Spanish-made Gaztanaga Destroyer .32 calibre semi-automatic pistol on his person in violation of the Emergency Powers Resolution. Childers is convicted by the military court and sentenced to death on November 20, 1922.

While his appeal against the sentence is still pending, Childers is executed on November 24, 1922 by firing squad at the Beggar’s Bush Barracks in Dublin. Before his execution he shakes hands with each member of the firing squad. He also obtains a promise from his then 16-year-old son, the future President Erskine Hamilton Childers, to seek out and shake the hand of every man who has signed his death sentence. His final words, spoken to the firing squad, are, “Take a step or two forward, lads, it will be easier that way.”

Robert Erskine Childers is buried at Beggar’s Bush Barracks until 1923, when his body is exhumed and reburied in the republican plot at Glasnevin Cemetery, Dublin.