Florence O’Donoghue, historian and head of intelligence of the Cork No. 1 Brigade of the Irish Republican Army (IRA) during the Irish War of Independence, dies on December 18, 1967, in Mercy University Hospital, Cork, County Cork.

O’Donoghue is born in Rathmore, County Kerry, on July 22, 1894, the son of farmer Patrick O’Donoghue and Margaret Cronin. He moves to Cork in 1910, where he works as an apprentice in the drapery trade.

The 1916 Easter Rising is a watershed in O’Donoghue’s life. In December 1916, he joins the Cork branch of the Irish Volunteers. In early 1917, he is elected unanimously First Lieutenant of the Cyclist Company and as a result devotes all his spare time to Volunteer work. He begins writing weekly for two years for The Irish World newspaper. By May 1917, he is sworn into the Irish Republican Brotherhood (IRB) and in October, Tomás Mac Curtain appoints him head of communications of the Cork Brigade. He replaces Pat Higgins as Brigade Adjutant in February 1917. He is a key organiser in the sensational jailbreak of Captain Donnchadh Mac Niallghuis on Armistice Day 1918 and takes personal responsibility for his protection. Michael Collins is the last officer from Volunteers General Headquarters to visit Cork shortly after Christmas 1919, until the truce in 1921.

O’Donoghue builds up an intelligence network and agents which includes his future wife, Josephine Marchment. She is head female clerk at the 6th Division Headquarters at Victoria Barracks, Cork, and passes on secret British Army correspondence to him. He recruits people to open letters, tap phone lines and intercept telegrams. The Irish Republican Army has 2,000 active members in Cork which are also used for intelligence gathering. By March 1920, after killing a Royal Irish Constabulary (RIC) Inspector, he is on the run and serving full-time in the IRA. In November of that year, the Cork Brigade kills six British Army officers and executes five Cork civilians on suspicion of spying.

After two and a half years of fighting, a truce is agreed upon on July 11, 1921. When the Dáil approves the Anglo-Irish Treaty, in January 1922, the IRA splits into pro- and anti-Treaty camps. Over the coming months and after being elected onto the army’s executive as Adjutant General, O’Donoghue warns of the dangers of an Irish Civil War. In June 1922, he resigns from the army’s national executive and a month later, on July 3, 1922, from the army. Civil war does break out on June 28, 1922 between pro- and anti-Treaty factions, much to his dismay.

During the Irish Civil War, O’Donoghue remains neutral and tries to organise a truce to end the fighting. In December 1922, he forms a group called the “Neutral IRA”, along with Seán O’Hegarty, composed of pro-truce IRA men. He claims he has 20,000 members in this group. He campaigns for a month’s truce between the two sides, so that a political compromise could be reached. However, his efforts come to nothing and in March 1923, he winds up the “Neutral IRA,” judging that its objectives cannot be achieved. The Irish Civil War ends on May 24, 1923.

O’Donoghue serves as major in the Irish Army from 1939-1946. He forms a Supplementary Intelligence Service that is to remain behind enemy lines in the event of an invasion. He also teaches guerrilla warfare tactics to new army recruits.

O’Donoghue marries Josephine Brown (née Marchment) in April 1921 and they have four children. The couple also adopts two children from Josephine’s first marriage, including Reggie Brown, whom O’Donoghue kidnaps from his grandparents in Wales in 1920. He becomes a rate collector and remains outside politics.

In later years O’Donoghue becomes a respected historian. While in the army he edits An Cosantóir, the Irish Army’s magazine. He convinces Éamon de Valera to establish the Bureau of Military History to record personal accounts from the Irish War of Independence. He is a recording officer until 1948. His most famous work is his biography on Liam Lynch, entitled No Other Law.

O’Donoghue dies on December 18, 1967, and Tom Barry gives the graveside oration. His papers are in the National Library of Ireland (NLI) and his statement to the Bureau of Military History is in the Military Archives.

Thomas Joseph Clancy, a member of the Irish folk group the Clancy Brothers, dies in Cork, County Cork, on November 7, 1990. He has the most powerful voice of the brothers and has previously been an actor in numerous stage productions, appearing with Orson Welles in King Lear. He also performs often on television and occasionally in the movies.

Clancy is born on October 29, 1924, one of eleven children born to Johanna McGrath and Bob Clancy in Carrick-on-Suir, County Tipperary. After being apprenticed as a baker, he follows his older brother Patrick “Paddy” Clancy into the Royal Air Force (RAF) in 1943 during World War II, despite both having been members of the Irish Republican Army. In the RAF, he works as a radio operator on bombing runs over Germany.

Discharged from the RAF at the end of the war, Clancy tours with a British repertory company. In 1947 he and his brother Paddy emigrate to Canada. They then move to New York where he meets his first wife and his oldest daughter is born in 1950. They then soon move to Cleveland, Ohio, to live with relatives. He works for a while as a repertory actor at the Cleveland Play House, before returning temporarily to Ireland. While in Ireland, Clancy works for the Shakespeareana Internationale company run by English actor and manager Geoffrey Kendal. After Paddy sends him extra money, he returns to the United States. The brothers plan to move to California, but their car breaks down. They decide to try New York City instead and find work as actors, both on and off Broadway.

In 1956 their brother Liam Clancy joins them, accompanied by his friend Tommy Makem. Liam and Tommy begin singing together, and in 1959 are joined by the older Clancy brothers as The Clancy Brothers and Tommy Makem. The group performs together until Liam leaves in 1976. Makem had left in 1969 to be replaced for a brief time by Bobby Clancy and later Louis Killen.

Clancy continues singing with The Clancy Brothers until 1976, when the group is disbanded. The group reforms in 1977 with a new line-up. Clancy performs with his brothers Paddy and Bobby and their nephew Robbie O’Connell until his death. He also performs with Paddy, Liam, and Tommy Makem during their reunion tour from 1984 to 1985.

Clancy takes the lead vocals on many of the group’s songs, such as “The Rising of the Moon,” “The Moonshiner,” “Haul Away Joe,” “Red Haired Mary,” “The Barnyards of Delgaty,” “Carrickfergus,” “I Once Loved a Lass,” “The Bold Fenian Men,” among others.

Clancy continues to act during his singing career, appearing in the movies The Killer Elite (1975) and Swashbuckler (1976). He also appears on episodes of Little House on the Prairie, Starsky and Hutch, and The Incredible Hulk, among others. He acts in several TV movies as well.

After an absence of fifteen years, Clancy returns to Broadway in May 1974 in Eugene O’Neill‘s A Moon for the Misbegotten. The Irish Times reviews his performance of Phil Hogan: “In ‘Moon’ he deftly measures up to the formidable company in which he finds himself – a wily, sly rogue with a whimsical humour and a genuine concern for his daughter.” The play is a hit and wins three Tony Awards.

Clancy dies from stomach cancer at the age of 66 on November 7, 1990 at Mercy University Hospital in Cork, County Cork. He is survived by his wife Joan and their three daughters, Rayleen, Blawneen and Rosie. Prior to his marriage to Joan, he has children, Eileen and Thomas, with Yvonne Marcus, in Cleveland, Ohio. He also has a daughter, Cait, with his second wife Laine, in the mid-1950s.

Clancy’s last recording is made in 1988 with Robbie O’Connell, Bobby Clancy, and Paddy Clancy at Saint Anselm College in Goffstown, New Hampshire. Unfortunately, the recording is marred by unevenly mixed instruments and voices. After his death, Liam returns to the Clancy Brothers to fill in his place. 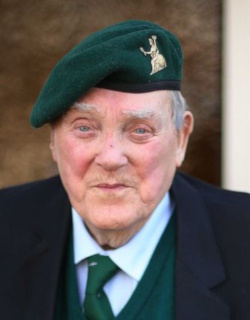 Former Commando Pat Gillen, one of the last surviving Irish D-Day veterans, dies at the age of 89 at his home in Cork, County Cork on December 27, 2014. He is among the first wave of troops to land on Sword Beach in Normandy on June 6, 1944.

A rifleman in the 6 Commando unit charged with securing the strategically important Pegasus Bridge near Caen, Gillen is never injured despite making a six-mile trek through marshland from the beach to Caen and spending weeks in the trenches at Saulnier. More than half his brigade falls in the face of vicious fire from German forces.

On his return to Ireland, Gillen applies for a job as a male stenographer with Ford Motor Company in Cork, where the company’s first plant outside the United States employs thousands of workers in the 1930s. Having studied Pitman shorthand, typing and bookkeeping at school, he is called for an interview that includes a shorthand test in which the only word “I could just not get right was carburetor.”

Not alone does Gillen land the job with the U.S. car and tractor firm, he also meets Rita, the daughter of his B&B landlady, whom he marries two years later. Blessed with a lively sense of humour, he has a natural flair for getting on with people and is assigned to Ford’s public relations division.

Gillen’s ease when dealing with journalists is an attribute that serves him well during an 11-year spell as Ford’s press officer, especially in the turbulent times leading up to its decision to close the Cork manufacturing plant in 1984, when he also retires after 38 years with the company.

A witty, unassuming man, Gillen’s abiding interests are gardening, his twelve grandchildren, the FCA, and letter-writing to wartime comrades, a practice he keeps up until weeks before his death.

On December 8, 2014, just over two weeks before his death and surrounded by his family in an emotional ceremony at the Mercy University Hospital in Cork, Gillen is presented with the Chevalier de la Légion d’honneur by the French ambassador to Ireland, Jean-Pierre Thébault, in recognition of his courage and gallantry in the liberation of France. It is the highest French honour.

With characteristic generosity, Gillen dedicates the medal to fellow countrymen, including two cousins who fought in but did not survive World War II. “This award is as much theirs as mine,” he said. “By the grace of God, I survived to be here today while many of my friends sleep in the fields of France.”

At the time of his passing Gillen is surrounded by his family. Predeceased by Rita, he is survived by their four children, Robin, Mary, Patricia, and Gerard, his sister, Mary, and brothers Michael (“Chick”), Liam and Bobby. His sister Angela Scully also predeceases him.