Eamonn Campbell, Irish musician who is a member of The Dubliners from 1987 until his death, is born in Drogheda, County Louth on November 29, 1946. He is also in The Dubliners when they record their 25th anniversary show on The Late Late Show hosted by Gay Byrne.

Campbell is known as a guitarist and has a rough voice similar to the late founding member of The Dubliners, Ronnie Drew. He tour with three other ex-Dubliners as “The Dublin Legends,” now that the group name has been retired with the death of Barney McKenna. Although originally from Drogheda in County Louth, he later lives in Walkinstown, a suburb of Dublin.

It was Campbell’s suggestion that The Dubliners work with London-based Irish band The Pogues in the mid-1980s, thus giving them their second biggest UK hit to date, “The Irish Rover.” Their biggest hit is “Seven Drunken Nights” which reaches number 7 in the charts in 1967 and an appearance on Top of the Pops.

Campbell produces all of The Dubliners’ albums from 1987 onwards, as well as albums for many other Irish artists, including Foster and Allen, Brendan Shine, Daniel O’Donnell and Paddy Reilly. He plays locally with the Delta Showband, The Bee Vee Five and the Country Gents before joining Dermot O’Brien and the Clubmen and first meets The Dubliners when both acts tour England together in 1967. In the mid to late 1970s he more or less retires from the road and becomes involved in the growing Irish recording scene, first as a session musician and later moving to production.

In 2002, Campbell puts a complaint to a commission to inquire into sexual abuse as he says he was abused by the Christian Brothers as a child. In an interview he says “I felt emotional with hate at what this arsehole had got away with. He was abusing the whole class. I still haven’t heard anything back.”

Campbell is the Grand Master for the 2009 Drogheda St. Patrick’s Day Parade. In his younger years he teaches guitar lessons at the “Music Shop” in Drogheda. His granddaughter Megan Campbell is a Republic of Ireland international footballer.

While on tour in the Netherlands with The Dublin Legends, Campbell feels unwell during his final performance. He returns to his hotel at around 1:00 AM and goes to bed. He dies during the early hours of the morning of October 18, 2017. His body is flown back to Dublin where his funeral takes place on October 26, 2017.

(Pictured: Eamonn Campbell during the Festival Interceltique de Lorient in 2014 | This file is licensed under the Creative Commons Attribution-Share Alike 4.0 International license) 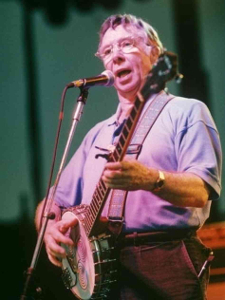 Thomas “Tommy” Makem, internationally celebrated Irish folk musician, artist, poet and storyteller, is born in Keady, County Armagh, on November 4, 1932. He is best known as a member of The Clancy Brothers and Tommy Makem. He plays the long-necked 5-string banjo, tin whistle, low whistle, guitar, bodhrán and bagpipes, and sings in a distinctive baritone. He is sometimes known as “The Bard of Armagh,” taken from a traditional song of the same name, and “The Godfather of Irish Music.”

Makem’s mother, Sarah Makem, is an important source of traditional Irish music, who is visited and recorded by, among others, Diane Guggenheim Hamilton, Jean Ritchie, Peter Kennedy and Sean O’Boyle. His father, Peter Makem, is a fiddler who also plays the bass drum in a local pipe band named “Oliver Plunkett,” after a Roman Catholic martyr of the reign of Charles II of England. His brother and sister are folk musicians as well. Makem, from the age of eight, is member of the St. Patrick’s church choir for 15 years where he sings Gregorian chant and motets. He does not learn to read music but he makes it in his “own way.”

Makem starts to work at 14 as a clerk in a garage and later he works for a while as a barman at Mone’s Bar, a local pub, and as a local correspondent for The Armagh Observer.

Makem emigrates to the United States in 1955, carrying his few possessions and a set of bagpipes from his time in a pipe band. Arriving in Dover, New Hampshire, he works at Kidder Press, where his hand was accidentally crushed by a press in 1956. With his arm in a sling, he leaves Dover for New York City to pursue an acting career.

The Clancys and Makem are signed to Columbia Records in 1961. The same year, at the Newport Folk Festival, Makem and Joan Baez are named the most promising newcomers on the American folk scene. During the 1960s, the Clancy Brothers and Tommy Makem perform sellout concerts at such venues as Carnegie Hall, and make television appearances on shows like The Ed Sullivan Show and The Tonight Show. The group performs for President John F. Kennedy. They also play in smaller venues such as the Gate of Horn in Chicago. They appear jointly in the UK Albums Chart in April 1966, when Isn’t It Grand Boys reaches number 22.

Makem leaves the group in 1969 to pursue a solo career. In 1975, he and Liam Clancy are both booked to play a folk festival in Cleveland, Ohio, and are persuaded to do a set together. Thereafter they often perform as Makem and Clancy, recording several albums together. He once again goes solo in 1988. Throughout the 1970s and 1980s he performs both solo and with Liam Clancy on The Irish Rovers‘ various television shows, which are filming in Canada and Ireland.

In the 1980s and 1990s, Makem is a principal in a well-known Irish music venue in New York, “Tommy Makem’s Irish Pavilion.” This East 57th Street club is a prominent and well-loved performance spot for a wide range of musicians. Among the performers and visitors are Paddy Reilly, Joe Burke, and Ronnie Gilbert. Makem is a regular performer, often solo and often as part of Makem and Clancy, particularly in the late fall and holiday season. The club is also used for warm-up performances in the weeks before the 1984 reunion concert of The Clancy Brothers and Tommy Makem at Lincoln Center for the Performing Arts. In addition, the after-party for Bob Dylan‘s legendary 30th Anniversary Concert Celebration at Madison Square Garden in 1992 is held at the Irish Pavilion.

In 1997 Makem writes a book, Tommy Makem’s Secret Ireland, and in 1999 premiers a one-man theatre show, Invasions and Legacies, in New York. His career includes various other acting, video, composition, and writing credits. He also establishes the Tommy Makem International Festival of Song in South Armagh in 2000.

Tommy Makem dies in Dover, New Hampshire, on August 1, 2007, following a lengthy battle with lung cancer. He continues to record and perform until very close to the end. Paying tribute to him after his death, Liam Clancy says, “He was my brother in every way.” He is buried next to his wife at New Saint Mary Cemetery in Dover.