O’Sullevan is the son of Colonel John Joseph O’Sullevan DSO, resident magistrate at Killarney, and Vera (née Henry). As an infant, the family returns to his parents’ home at Kenmare, County Kerry and he is raised in Surrey, England. He is educated at Hawtreys Preparatory School, Charterhouse School, and later at Collège Alpin International Beau Soleil in Switzerland.

In the late 1940s O’Sullevan is involved in some of the earliest television commentaries on any sport, and makes many radio commentaries in his earlier years (including the Grand National before it is televised for the first time in 1960). On television, he commentates on many of the major events of the racing year, including the Cheltenham Festival until 1994, The Derby until 1979, and the Grand National, Royal Ascot and Glorious Goodwood until he retires in 1997. During his career, he commentates on around 30 runnings of the Prix de l’Arc de Triomphe in Paris and racing from the United States and Ireland as well as trotting from Rome during the 1960s.

During his 50 years of commentating on the Grand National, O’Sullevan commentates on numerous historic victories. These include Bob Champion‘s run on Aldaniti in 1981 after recovering from cancer, 100/1 outsider Foinavon‘s win in 1967, and the three-times winner Red Rum in 1973, 1974 and 1977. He also commentates on the 1993 Grand National, which is declared void after 30 of the 39 runners fail to realise there had been a false start, and seven go on to complete the course. As the runners approach the second-last fence in the so-called “race that never was,” O’Sullevan declares it “the greatest disaster in the history of the Grand National.”

O’Sullevan becomes known as the “Voice of Racing.” In a television interview before his 50th and last Grand National in 1997, he reveals that his commentary binoculars came from a German submarine. He is knighted the same year – the only sports broadcaster at the time to have been bestowed that honour. He is also a racehorse owner, including of Be Friendly, who wins the King’s Stand Stakes at Ascot, and Prix de l’Abbaye de Longchamp. He is twice successful in the Haydock Sprint Cup (then Vernons Sprint) in 1966 and 1967. Another horse he owns is Attivo, whose victory in the 1974 Triumph Hurdle at the Cheltenham Festival is described by O’Sullevan as the most difficult race to call.

Attivo also wins the Chester Cup and the Northumberland Plate during the 1970s. O’Sullevan’s final race commentary comes at Newbury Racecourse for the 1997 Hennessy Gold Cup, and he visits the winners’ enclosure as a winning owner in the race which follows courtesy of Sounds Fyne’s victory in the Fulke Walwyn Chase. He is succeeded as the BBC’s lead commentator by Jim McGrath.

After his retirement, O’Sullevan is actively involved in charity work, fundraising for causes which revolve around the protection of horses and farm animals, including the International League for the Protection of Horses (ILPH), the Thoroughbred Rehabilitation Centre and Compassion in World Farming. The National Hunt Challenge Chase Cup (run at the Cheltenham Festival) is named after him in 2008 to celebrate his 90th birthday. In 2010, Aintree Racecourse names O’Sullevan as one of the eight inaugural “Grand National Legends.” His name is inscribed on a commemorative plaque at the course, alongside the likes of Ginger McCain and Captain Martin Becher.

O’Sullevan meets his wife Patricia, daughter of Frank Duckworth of Manitoba, Canada, at a ball in Manchester in 1947. She dies of Alzheimer’s disease in 2010. 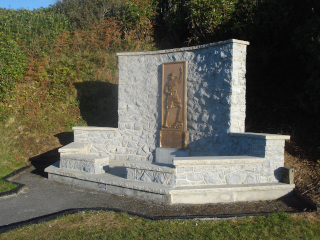 The Rineen ambush is carried out by the Irish Republican Army (IRA) on September 22, 1920, during the Irish War of Independence. It takes place at Drummin Hill in the townland of Drummin, near the hamlet of Rineen, County Clare.

The Volunteers in County Clare have been active since 1917 and by late 1920 have forced the Royal Irish Constabulary (RIC) to abandon most of its small rural barracks in the county. This gives the IRA greater freedom to move in the countryside. In August 1920, the RIC are reinforced by the British deployment of Black and Tans and Auxiliaries to the county. Five RIC men, eleven IRA volunteers and four civilians have been killed in County Clare during the two years before the ambush.

The Rineen Ambush is ordered by the leadership of the IRA’s Mid-Clare Brigade, who had noticed that a RIC lorry travels every week on the Ennistymon to Milltown Malbay road. John Joe Neylon, leader of the local IRA battalion, is put in charge, although the actual attack is led by Ignatius O’Neill, the Officer Commanding. He is a veteran of World War I who had formerly fought with the Irish Guards. The ambush party has only nine rifles and some grenades, the remainder being armed with shotguns or handguns. They prepare to attack the lorry from a railway bridge that overlooks the road at Rineen.

As the IRA party is lying in wait, Alan Lendrum, the local resident magistrate, drives unwittingly into a roadblock of the IRA’s West Clare Brigade, in an unrelated action. He is stopped at a railway crossing at Caherfeenick near Doonbeg. When the IRA demand he surrender his car, he draws an automatic pistol and the IRA men shoot him twice in the head, fatally wounding him. The IRA weights his body with stones and dumps it in a nearby lake. Even though the British Military inquest establishes that Lendrum had died of gunshot wounds, members of the RIC in Clare spread a false version of events and claim that Lendrum had died of drowning.

Although in strict military sense not related to the ambush, it has serious consequences for the ambush. It is quite quickly noticed that the magistrate is missing and the military in Ennistymon decide to send out a search party of ten lorries of soldiers.

The RIC lorry passes safely through the ambush position, travelling from Ennistymon to Milltown Malbay, due to some confusion among the IRA over the numbers they face. However when they learn that there is only one lorry, it is attacked on its return journey from Milltown Malbay. The lorry is hit by a grenade and blasted at close range by rifle and shotgun fire. The shooting is over in seconds, with five out of the six RIC men being killed outright. The sixth man manages to run about 300 yards before being shot dead. Five of the dead are Irish RIC officers and one is an English Black and Tan. The IRA take their weapons and burn the lorry.

Not long after the lorry has been set ablaze, the ten-lorry search party arrives on the scene. A running fight develops, as four IRA riflemen keep the troops at bay while the other volunteers make their escape. Two IRA volunteers and several British soldiers are wounded in the firing. Padraic O’Farrell lists the casualties as three British soldiers killed, but this is not confirmed by the other sources.

The British forces, enraged by the ambush and the escape of the IRA force, take out reprisals on civilians in the surrounding area. Immediately after the action ends, they burn the house and farm of the O’Gorman family and shoot a local farmer, Sean Keane, who later dies of his wounds.

That night, a mixed force of police and soldiers raid the Lahinch home of Dan Lehane, whose two sons had taken part in the ambush. They shoot him dead and burn his house. Patrick Lehane, who is hiding in the attic, perishes in the blaze. Several other houses are burned in Lahinch and a further eight are razed in Milltown Malbay. A separate RIC raid takes place in Ennistymon, in which several homes and businesses are burned.

In what may have been a belated reprisal for the ambush, four IRA men are arrested by the Auxiliaries at Killaloe on November 16, beaten, interrogated and then shot dead. Another two are summarily executed in the same manner on December 22 at Kilkee.

The reprisals are condemned in the British, Irish and international press. In the House of Commons, the British Labour Party tables a resolution condemning the reprisals and calling for an investigation. This is defeated by 346 votes to 79. Hamar Greenwood, the Chief Secretary for Ireland, defends the State Forces’ actions, saying that the houses destroyed were those of “notorious Sinn Féiners…I am convinced that the people of those two villages knew of this ambush.”

In Clare itself, according to IRA man Anthony Malone, the ambush has two effects. One is that the RIC becomes careful to travel in convoys of no less than three lorries. The other is that, as a result of the reprisals, the civilian population becomes embittered against the British and adopt a more defiant attitude to the British military and Black and Tans.

The death of Resident Magistrate Alan Lendrum, however, according to pro-republican Catholic priest Sean Gaynor, “was not to our credit.” On October 1, the local IRA remove Lendrum’s body from the lake, put it in a roughly constructed coffin and leave it on the railway tracks at Craggaknock railway station for British forces to find.

(Pictured: Monument for the attack at Rineen during the Irish War of Independence, designed by Walter Kiernan)