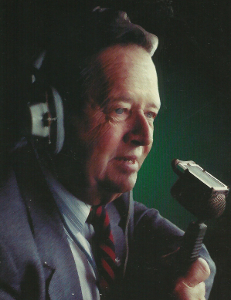 Michael James O’Hehir, hurling, Gaelic football and horse racing commentator and journalist, is born on June 2, 1920, in Glasnevin, County Dublin. Between 1938 and 1985 his enthusiasm and a memorable turn of phrase endears him to many. He is credited with being the “Voice of the Gaelic Athletic Association.”

His father, Jim O’Hehir, is active in Gaelic games, having trained his native county to win the 1914 All-Ireland Senior Hurling Championship title in hurling. He subsequently trains the Leitrim football team that secures the Connacht Senior Football Championship title in 1927 and he also serves as an official with the Dublin Junior Board.

O’Hehir is educated at St. Patrick’s National School in Drumcondra before later attending the O’Connell School. He later studies electrical engineering at University College Dublin, however, he abandons his studies after just one year to pursue a full-time career in broadcasting.

At the age of eighteen O’Hehir writes to Radio Éireann asking to do a test commentary. He is accepted and is asked to do a five-minute microphone test for a National Football League game between Wexford and Louth. His microphone test impresses the director of broadcasting so much that he is invited to commentate on the entire second half of the match.

Two months later, in August 1938, O’Hehir makes his first broadcast – the All-Ireland football semi-final between Monaghan and Galway. The following year he covers his first hurling final – the famous “thunder and lightning final” between Cork and Kilkenny.

By the mid-1940s O’Hehir is recognised as one of Ireland’s leading sports broadcasters. In 1947 he faces his most challenging broadcast to date when he has to commentate on the All-Ireland Football Final from the Polo Grounds in New York City with over 1,000,000 people listening to the broadcast back in Ireland.

In 1944 O’Hehir joins the staff of Independent Newspapers as a sports sub-editor, before beginning a seventeen-year career as racing correspondent in 1947.

In 1961 Ireland’s first national television station, Telefís Éireann, is founded and O’Hehir is appointed head of sports programmes. In addition to his new role O’Hehir continues to keep up a hectic schedule of commentaries.

O’Hehir’s skills do not just confine him to sports broadcasting and, in November 1963, he faces his toughest broadcast. By coincidence he is on holidays with his wife Molly in New York City when U.S. President John F. Kennedy is assassinated. O’Hehir is asked by Telefís Éireann to provide the commentary for the funeral. The live five-hour broadcast proves a huge challenge for him, as he has had no association with political or current affairs broadcasting up to that point and lacks the resources available to more established television stations. O’Hehir’s commentary, however, wins widespread acclaim in Ireland and shows a different side of his nature.

In August 1985 O’Hehir is preparing to commentate on the All-Ireland hurling final between Offaly and Galway. It would be a special occasion as it would mark his 100th commentary on an All-Ireland final. Two weeks before the game he suffers a stroke which leaves him in a wheelchair and with some speaking difficulties. This denies him the chance to reach the century milestone. He hopes to return to broadcasting one day to complete his 100th final, however, this never happens.

In 1987, the centenary All-Ireland football final takes place Croke Park. The biggest cheer of the day is reserved for O’Hehir when he is pushed onto the field in a wheelchair by his son Peter. Nobody expects the standing ovation and the huge outpouring of emotion from the thousands of fans present and from O’Hehir himself.

Over the next few years O’Hehir withdraws from public life. He returns briefly in 1996 when his autobiography, My Life and Times, is published. Michael O’Hehir dies in Dublin on November 24, 1996.