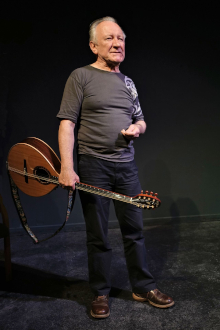 Dónal Lunny, Irish folk musician and producer, is born on March 10, 1947 in Tullamore, County Offaly. He plays left-handed guitar and bouzouki, as well as keyboards and bodhrán. As a founding member of popular bands Planxty, The Bothy Band, Moving Hearts, Coolfin, Mozaik, LAPD, and Usher’s Island, he has been at the forefront of the renaissance of Irish traditional music for over five decades.

Lunny attends secondary school at Newbridge College and, in 1963, joins the Patrician Brothers’ school for the Intermediate Certificate year. As a teenager, he joins an occasional trio called Rakes of Kildare, with his elder brother Frank and Christy Moore. They play mostly in pubs and are also booked for a couple of gigs, one at Hugh Neeson’s pub in Newbridge for Easter Monday in 1966.

In 1965, Lunny enrolls at Dublin‘s National College of Art & Design where he studies Basic Design and Graphic Design. He also develops an interest in metalwork leading him to become a skilled gold-and-silversmith, although he only practises the craft for a short time before devoting his energies fully to music. During his time in Dublin, he plays in a band called The Parnell Folk, with Mick Moloney, Sean Corcoran, Johnny Morrissey and Dan Maher.

When Moving Hearts breaks up in 1985, Lunny diversifies and becomes a producer. He is closely involved in the establishment of a new Irish record label, Mulligan Records (acquired in 2008 by Compass Records), and produces and plays on many of its early releases.

Lunny is the producer and music director of the soundtrack of Bringing It All Back Home, a BBC Television documentary series charting the influence of Irish music throughout the world. He produces albums for Paul Brady, Elvis Costello, Indigo Girls, Sinéad O’Connor, Clannad, Maurice Lennon, Baaba Maal, and Five Guys Named Moe. He appears on the compilation albums The Gathering (1981) and Common Ground (1996). In 1994, he produces Irish Australian singer/songwriter Mairéid Sullivan’s first recording, Dancer.

Lunny pushes new boundaries with his band Coolfin (1998) which includes uilleann piper John McSherry. He appears at the 2000 Cambridge Folk Festival, and the album that commemorates it. In 2001 he collaborates with Frank Harte on the album My Name is Napoleon Bonaparte. He produces the album Human Child (2007) by Faeroese Eivør Pálsdóttir, which is published in two versions, one English and one Faeroese.

As an arranger, Lunny works for The Waterboys, Fairground Attraction and Eddi Reader. Journey (2000) is a retrospective album. During 2003–2005, he is part of the reunited Planxty concert tour. He also produces Jimmy MacCarthy‘s album entitled Hey-Ho Believe, which is released on November 12, 2010.

Lunny is the brother of musician and producer Manus Lunny. He has a son, Shane, whose mother is singer Sinéad O’Connor. 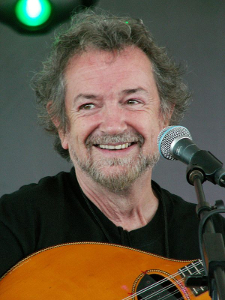 Andrew Kennedy Irvine, known as Andy Irvine, Irish folk musician and singer-songwriter, is born on June 14, 1942 in St. John’s Wood, London, England to an Irish mother from Lisburn, County Antrim, and a Scottish father from Glasgow. He is a founding member of popular bands Sweeney’s Men, Planxty, Patrick Street, Mozaik, LAPD and Usher’s Island. He plays the mandolin, mandola, bouzouki, harmonica and hurdy-gurdy.

Irvine has been influential in folk music for over five decades, during which he records a large repertoire of songs and tunes he assembles from books, old recordings and folk-song collectors rooted in the Irish, English, Scottish, Eastern European, Australian and American old-time and folk traditions. He sets these songs to new music and also writes songs about his personal experiences or the lives and struggles of his heroes, including Tom Barker, Michael Davitt, Mother Jones, Douglas Mawson, Raoul Wallenberg, and Emiliano Zapata.

Imbued with a sense of social justice, Irvine often selects or writes songs that are based on historical events and presented from the victim’s perspective. Some of these songs chronicle the abject living and working conditions imposed on groups of people such as the emigrants, the brutalized migrant workers, the exploited textile strikers or coalminers. Other songs recall the archetypal experiences of single individuals – the woman seduced by an unfaithful man or disowned by her father, the destitute young man ostracized or murdered on the order of his sweetheart’s rich father, the down-on-his-luck farmer or the unemployed worker, the young man inveigled by the army’s recruiting sergeant, the scapegoats. Irvine’s songs also denounce worker deaths and industrial diseases, and lament the plight of hunted animals. His repertoire includes humorous songs, but also bittersweet ones of unrequited love, or of lovers cruelly separated or dramatically reunited. He also sings about famous racehorses, men or women masquerading in various disguises, a fantastical fox preying on young maidens, and the violent lives of outlaws.

As a child actor, Irvine hones his performing talent from an early age and learns the classical guitar. He switches to folk music after discovering Woody Guthrie, also adopting the latter’s other instruments, the harmonica and mandolin. While extending Guthrie’s guitar picking technique to the mandolin, he further develops his playing of this instrument and, later, of the mandola and the bouzouki, into a decorative, harmonic style and embraces the modes and rhythms of Bulgarian folk music. Along with Johnny Moynihan and Dónal Lunny, Irvine is one of the pioneers who adapts the Greek bouzouki into an Irish instrument. He contributes to advancing the design of his instruments in cooperation with English luthier Stefan Sobell, and he occasionally plays a hurdy-gurdy made for him in 1972 by Peter Abnett, another English luthier.

Although touring mainly as a soloist, Irvine has also enjoyed great success in pursuing collaborations through many projects that have influenced contemporary folk music. He continues to tour and perform extensively in Ireland, Great Britain, Europe, North and South America, Japan, Australia and New Zealand.