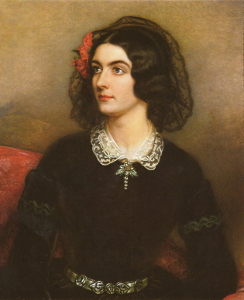 Marie Dolores Eliza Rosanna Gilbert, Countess of Landsfeld, Irish dancer and actress better known by the stage name Lola Montez, dies in Brooklyn, New York, on January 17, 1861. She becomes famous as a “Spanish dancer,” courtesan, and mistress of King Ludwig I of Bavaria, who makes her Countess of Landsfeld. She uses her influence to institute liberal reforms. At the start of the German revolutions of 1848-1849, she is forced to flee. She proceeds to the United States via Switzerland, France, and London, returning to her work as an entertainer and lecturer.

Gilbert is born in Grange, County Sligo, on February 17, 1821. Her family makes their residence at King House in Boyle, County Roscommon, until early 1823, when they journey to Liverpool, thence departing for India on March 14. Gilbert spends much of her childhood in India but is educated in Scotland and England. At age 19 she elopes with Lieutenant Thomas James. The couple separates five years later and, in 1843, Gilbert launches a career as a dancer. Her London debut in June 1843 as “Lola Montez, the Spanish dancer” is disrupted when she is recognized as Mrs. James. The fiasco would probably have ended the career of anyone less beautiful and determined, but Gilbert receives additional dancing engagements throughout Europe. During her travels she reputedly forms liaisons with Franz Liszt and Alexandre Dumas, among many others.

Late in 1846, Gilbert dances in Munich and Ludwig I of Bavaria is so struck by her beauty that he offers her a castle. She accepts, becomes Baroness Rosenthal and Countess of Lansfeld, and remains as his mistress. Under Gilbert’s influence, Louis inaugurates liberal and anti-Jesuit governmental policies, but his infatuation with her helps to bring about the collapse of his regime in the revolution of 1848. In March of that year Ludwig abdicates in favour of his son. Gilbert flees to London, where in 1849 she marries Lieutenant George Heald, although she has never been divorced from James. Heald later leaves her.

From 1851 to 1853 Gilbert performs in the United States. Her third marriage, to Patrick P. Hull of San Francisco in 1853, ends in divorce soon after she moves to Grass Valley, California. There, among other amusements, she coaches young Lotta Crabtree in singing and dancing. She settles in New York City after an unsuccessful tour of Australia in 1855–1856 and gathers a following as a lecturer on such topics as fashion, gallantry, and beautiful women. An apparently genuine religious conversion leads her to take up various personal philanthropies.

Gilbert publishes Anecdotes of Love; Being a True Account of the Most Remarkable Events Connected with the History of Love; in All Ages and among All Nations (1858), The Arts of Beauty, or, Secrets of a Lady’s Toilet with Hints to Gentlemen on the Art of Fascination (1858), and Lectures of Lola Montez, Including Her Autobiography (1858). The international notoriety of her heyday persists long after her death and inspires numerous literary and balletic allusions.

Gilbert spends her last days in rescue work among women. By November 1859 she is showing the tertiary effects of syphilis and her body begins to waste away. She dies at the age of 39 on January 17, 1861. She is buried in Green-Wood Cemetery in Brooklyn, New York.