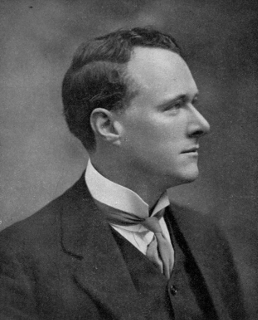 James Bernard Fagan, Irish-born actor, theatre manager, producer and playwright in England, is born in Belfast on May 18, 1873.

Fagan is the eldest of the five children of Sir James Fagan, a surgeon at the Belfast Royal Hospital and an inspector of Irish reformatories, and Mary Catherine Fagan, née Hughes. He attends Clongowes Wood College near Clane, County Kildare and then moves to England. Initially interested in a career in the church, he begins studying law at Trinity College, Oxford in 1892 but leaves in 1893 without a degree. He works for a time in the Indian Civil Service but abandons this career for the stage.

Fagan begins his career as an actor with the company of Sir Frank Benson for two years, then joining, from 1895 to 1899, the company of Herbert Beerbohm Tree at Her Majesty’s Theatre. There he appears in Katherine and Petruchio, A Man’s Shadow, Julius Caesar, The Musketeers and Carnac Sahib. He starts writing plays in 1899, with The Rebels, for the time forsaking acting. In 1913 he returns to the stage touring as the Rt Hon. Denzil Trevena in his own play, The Earth. He next writes The Fourth of August (1914) and Doctor O’Toole (1917). In 1917 he produces his first play, his own adaptation of the Brieux play Damaged Goods at St. Martin’s Theatre. He next produces The Wonder Tales and The Little Brother at the Ambassadors Theatre in London.

Fagan takes over the Court Theatre in London’s Sloane Square as a Shakespearean playhouse in 1920. The Times calls his revivals of Twelfth Night, The Merchant of Venice, Henry the Fourth (Part Two) and A Midsummer Night’s Dream “memorable for their freshness, sanity and distinction, and [deserving of] a place in theatrical history.” At the Court, he revives Damaged Goods and, in 1921, with the assistance of the author, produces George Bernard Shaw‘s Heartbreak House, with Edith Evans as “Lady Utterwood.” In 1922 he produces his play The Wheel at the Apollo Theatre. Its success allows him to repay his creditors. Even more successful is his adaptation of Treasure Island at the Savoy Theatre with Arthur Bourchier as “Long John Silver,” which opens December 26, 1922. It is revived every Christmas until the outbreak of World War II.

Fagan is persuaded by Jane Ellis, the actress who with Alfred Ballard founds the Oxford Playhouse “Red Barn” in 1923, to be its first manager. His first production at the Oxford Playhouse is a restaging of Shaw’s Heartbreak House and numbered Shaw among the audience. He produces The Cherry Orchard, at various theatres, to favourable reviews, popularising Anton Chekhov in Britain. From November 16, 1925, with Dennis Eadie, he presents Juno and the Paycock at the Royalty Theatre, thus bringing Seán O’Casey to the attention of London’s theatre-going public. O’Casey’s The Plough follows the next year.

Fagan receives little support from the University of Oxford or the play-going public and resigns in 1929. His successor is Stanford Holme, who broadens its appeal and, despite the straitened times, makes it financially viable. In 1929, he is a director of the Festival Theatre, Cambridge, where his friend Terence Gray is director. He also produces many works for the Irish Players.

Beginning in the 1920s, several of Fagan’s plays are adapted for film. He moves to Hollywood in 1929 for the filming by Paramount Pictures of his play The Wheel as The Wheel of Life. Other film work includes his co-adaptation of the screenplay for the 1932 film Smilin’ Through, and he co-writes Paramount’s Forgotten Commandments the same year. His play Bella Donna is filmed four times, including posthumously in 1946, and a 1936 film, The Improper Duchess is based on his 1931 play of the same name.

James Bernard Fagan dies in Hollywood, California, on February 17, 1933 at the age of 59 of a heart attack following a bout of influenza.