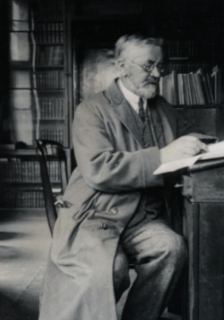 Osborn Joseph Bergin, a scholar of the Irish language and early Irish literature, is born in Cork, County Cork on November 26, 1873.

Bergin is the sixth child and eldest son of Osborn Roberts Bergin and Sarah Reddin, and is educated at Queen’s College Cork, now University College Cork. He then goes to Germany for advanced studies in Celtic languages, working with Heinrich Zimmer at the Friedrich Wilhelm University in Berlin, now the Humboldt University of Berlin, and later with Rudolf Thurneysen at the University of Freiburg, where he writes his dissertation on palatalization in 1906. He then returns to Ireland and teaches at the School of Irish Learning and at University College Dublin.

Within one year of becoming Director of the School of Irish Studies in the Dublin Institute for Advanced Studies, Bergin resigns both the senior professorship and his office of director. The reason for his resignation is never made public.

Bergin, who never uses the name Joseph except when signing with his initials, does not seem to have felt the need of institutional religion, and during his lifetime, he rarely attends religious services. He develops Irish nationalist sympathies and remains a firm nationalist all his life but without party affiliations. From the number of Irish-speakers living in Cork, he quickly masters the spoken Irish of West Munster. By 1897, his knowledge of spoken and literary Modern Irish is so strong that he is appointed lecturer in Celtic in Queen’s College, Cork. It is during this time that he becomes an active member of the Gaelic League.

Bergin publishes extensively in the journal for Irish scholarship, Ériu. He is best known for his discovery of Bergin’s Law, which states that while the normal order of a sentence in Old Irish is verb-subject-object, it is permissible for the verb, in the conjunct form, to be placed at the end of the sentence. His friend Frank O’Connor writes humorously that while he discovers the law “he never really believed in it.” He writes poetry in Irish and makes a number of well-received translations of Old Irish love poetry.

Bergin is celebrated in Brian O’Nolan‘s poem Binchy and Bergin and Best, originally printed in the Cruiskeen Lawn column in The Irish Times and now included in The Best of Myles. He is noted for his feuds with George Moore and William Butler Yeats, but he enjoys a lifelong friendship with George William Russell. Frank O’Connor describes Bergin’s eccentricities affectionately in his memoir My Father’s Son.

Osborn Bergin dies in a nursing home in Dublin at the age of 76 on October 6, 1950, having never married.