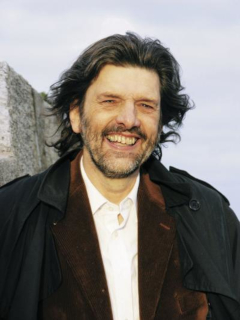 Micheal O’Siadhail, poet and linguist, is born in Dublin on January 12, 1947. Among his awards are The Marten Toonder Prize and The Irish American Culture Institute Prize for Literature.

O’Siadhail is born into a middle-class Dublin family. His father, a chartered accountant, is born in County Monaghan and works most of his life in Dublin, and his mother is a Dubliner with roots in County Tipperary. Both of them are portrayed in his work in several poems such as “Kinsmen” and “Promise”. From the age of twelve, he is educated at the Jesuit boarding school Clongowes Wood College, an experience he is later to describe in a sequence of poems “Departure” (The Chosen Garden).

At Clongowes O’Siadhail is influenced by his English teacher, the writer Tom MacIntyre, who introduces him to contemporary poetry. At thirteen he first visits the Aran Islands. This pre-industrial society with its large-scale emigration has a profound impact on him. His earlier work reflects this tension between his love of his native Dublin and his emotional involvement with those outlying communities and which features in the sequence “Fists of Stone” (The Chosen Garden).

O’Siadhail studies at Trinity College Dublin (1964–68) where his teachers include David H. Greene and Máirtín Ó Cadhain. He is elected a Scholar of the College and takes a First Class Honours Degree. His circle at Trinity includes David McConnell (later professor of genetics), Mary Robinson and David F. Ford (later Regius Professor of Divinity at the University of Cambridge). He subsequently embarks on a government exchange scholarship studying folklore and the Icelandic language at the University of Oslo. He retains lifelong contacts with Norwegian friends and sees Scandinavian literature as a major influence.

In 1970 O’Siadhail marries Bríd Ní Chearbhaill, who is born in Gweedore, County Donegal. She is for most of her life a teacher and later head mistress in an inner-city Dublin primary school until her retirement in 1995 due to Parkinson’s disease. She is a central figure in his oeuvre celebrated in the sequence “Rerooting” in The Chosen Garden and in Love Life, which is a meditation on their lifelong relationship. One Crimson Thread travels with the progression of her Parkinson’s Disease. She dies on June, 17, 2013.

For seventeen years, O’Siadhail earns his living as an academic; firstly as a lecturer at Trinity College (1969–73) where he is awarded a Master of Letters degree in 1971 and then as a research professor at the Dublin Institute for Advanced Studies. During these years he gives named lectures in Dublin and at Harvard University and Yale University and is a visiting professor at the University of Iceland in 1982. In 1987 he resigns his professorship to devote himself to writing poetry which he describes as “a quantum leap.”

During his years as an academic, O’Siadhail, writing under the Irish spelling of his name, published works on the linguistics of Irish and a textbook for learners of Irish.

O’Siadhail serves as a member of the Arts Council of the Republic of Ireland (1987–93), of the Advisory Committee on Cultural Relations (1989–97) and is editor of Poetry Ireland Review. He is the founding chairman of ILE (Ireland Literature Exchange). As a founder member of Aosdána (Academy of Distinguished Irish Artists) he is part of a circle of artists and works with his friend the composer Seóirse Bodley, the painters Cecil King and Mick O’Dea and in 2008 gives a reading as part of Brian Friel‘s eightieth birthday celebration.

O’Siadhail represents Ireland at the Poetry Society‘s European Poetry Festival in London in 1981 and at the Frankfurt Book Fair in 1997. He is writer-in-residence at the Yeats Summer School in 1991 and writer in residence at the University of British Columbia in 2002.

O’Siadhail is now married to Christina Weltz, who is a native of New York, and Assistant Professor of surgical oncology at Mount Sinai Hospital. They reside in New York.