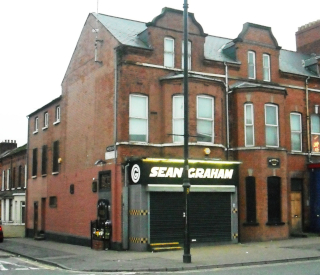 A mass shooting takes place at the Sean Graham bookmaker‘s shop on the Lower Ormeau Road in Belfast, Northern Ireland on February 5, 1992. Members of the Ulster Defence Association (UDA), a loyalist paramilitary group, open fire on the customers, killing five civilians and wounding another nine. The shop is in an Irish nationalist area, and all of the victims are local Catholic civilians. The UDA claims responsibility using the cover name “Ulster Freedom Fighters”, and says the shooting is retaliation for the Teebane bombing, which had been carried out by the Provisional Irish Republican Army (IRA) less than three weeks earlier.

The start of 1992 witnesses an intensification in the campaign of violence being carried out by the Ulster Defence Association (UDA) under their UFF covername. However, the Inner Council of the UDA, which contains the six brigadiers that control the organisation, feel that one-off killings are not sending a strong enough message to republicans and so it sanctions a higher-profile attack in which a number of people will be killed at once. On this basis the go-ahead is given to attack Sean Graham bookmaker’s shop on the Irish nationalist Lower Ormeau Road, which is near the UDA stronghold of Annadale Flats. The bookmaker’s shop is chosen by West Belfast Brigadier and Inner Council member Johnny Adair because he has strong personal ties with the commanders of the Annadale UDA. A 1993 report commissioned by the Royal Ulster Constabulary (RUC) Special Branch also claims that Adair is the driving force behind the attack.

The attack occurs at 2:20 in the afternoon. A car parks on University Avenue facing the bookmakers and two men, wearing boilersuits and balaclavas, leave the car and cross the Ormeau Road to the shop. One is armed with a vz.58 Czechoslovak assault rifle and the other with a 9mm pistol. They enter the shop and unleash a total of 44 shots on the fifteen customers. Five Catholic men and boys are killed and nine others are wounded, one critically.

In a separate incident, a unit of the Ulster Volunteer Force (UVF) travels to the area at the time of the attack with the intention of killing a local Sinn Féin activist based on intelligence they had received that he returns home about that time every day. The attack is abandoned, however, when the car carrying the UVF members is passed by speeding RUC vehicles and ambulances. The UVF members, who had already retrieved their weapons for the attack, are said to be livid with the UDA for not coordinating with them beforehand and effectively spoiling their chance to kill a leading local republican.

A UDA statement in the aftermath of the attack claims that the killings are justified as the Lower Ormeau is “one of the IRA’s most active areas.” The statement also includes the phrase “remember Teebane”, suggesting that the killings are in retaliation for the Teebane bombing in County Tyrone less than three weeks earlier. In that attack, the IRA had killed eight Protestant men who were repairing a British Army base. The same statement had also been yelled by the gunmen as they ran from the betting shop.

On February 5, 2002 a plaque is erected on the side of the bookmaker’s shop in Hatfield Street carrying the names of the five victims and the Irish language inscription Go ndéana Dia trócaire ar a n-anamacha (“May God have mercy on their souls”). A small memorial garden is later added. The unveiling ceremony, which takes place on the tenth anniversary of the attack, is accompanied by a two-minute silence and is attended by relatives of the dead and survivors of the attack. A new memorial stone is laid on February 5, 2012 to coincide with the publication of a booklet calling for justice for the killings. 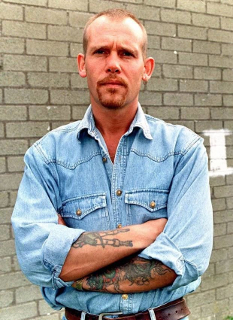 Billy “King Rat” Wright, prominent Ulster loyalist death squad leader during the ethno-nationalist conflict in Northern Ireland known as the Troubles, is murdered on December 27, 1997 in HM Prison Maze by three members of the Irish National Liberation Army (INLA) who manage to smuggle guns into the prison.

William Stephen “Billy” Wright, named after his grandfather, is born in Wolverhampton, England on July 7, 1960 to David Wright and Sarah McKinley, Ulster Protestants from Portadown, Northern Ireland. The family returns to Northern Ireland in 1964. While attending Markethill High School, Wright takes a part-time job as a farm labourer where he comes into contact with a number of staunchly unionist and loyalist farmers who serve with the Royal Ulster Constabulary (RUC) Reserve or the Ulster Defence Regiment (UDR). The conflict known as the Troubles has been raging across Northern Ireland for about five years by this stage, and many young men such as Wright are swept up in the maelstrom of violence as the Provisional Irish Republican Army ramps up its bombing campaign and sectarian killings of Catholics by loyalists continue to escalate. During this time his opinions move towards loyalism and soon he gets into trouble for writing the initials “UVF” on a local Catholic primary school wall. When he refuses to clean off the vandalism, he is transferred from the area and sent to live with an aunt in Portadown.

Wright joins the Ulster Volunteer Force (UVF) in 1975. After spending several years in prison and becoming a born again Christian, he resumes his UVF activities and becomes commander of its Mid-Ulster Brigade in the early 1990s, taking over from Robin “the Jackal” Jackson. According to the Royal Ulster Constabulary, he is involved in the sectarian killings of up to 20 Catholics, although he is never convicted for any. It is alleged that Wright, like his predecessor, is an agent of the RUC Special Branch.

Wright attracts considerable media attention during the Drumcree standoff, when he supports the Protestant Orange Order‘s desire to march its traditional route through the Catholic/Irish nationalist area of his hometown of Portadown. In 1994, the UVF and other paramilitary groups call ceasefires. However, in July 1996, Wright’s unit breaks the ceasefire and carries out a number of attacks, including a sectarian killing. For this, Wright and his Portadown unit of the Mid-Ulster Brigade are stood down by the UVF leadership. He is expelled from the UVF and threatened with execution if he does not leave Northern Ireland. He ignores the threats and, along with many of his followers, defiantly forms the breakaway Loyalist Volunteer Force (LVF), becoming its leader.

The LVF carries out a string of killings of Catholic civilians. In March 1997 Wright is sent to the HM Prison Maze for having threatened the life of a woman. While imprisoned, Wright continues to direct the LVF’s activities. On the morning of December 27, 1997 he is assassinated inside the prison by three INLA volunteers – Christopher “Crip” McWilliams, John “Sonny” Glennon and John Kennaway – armed with two smuggled pistols, a FEG PA-63 semi-automatic and a .22 Derringer. The LVF carries out a wave of sectarian attacks in retaliation. There is speculation that the authorities collude in his killing as he is a threat to the peace process. An inquiry finds no evidence of this, but concludes there are serious failings by the prison authorities.

Owing to his uncompromising stance as an upholder of Ulster loyalism and opposition to the Northern Ireland peace process, Wright is regarded as a cult hero, icon, and martyr by hardline loyalists. His image adorns murals in loyalist housing estates and many of his devotees have tattoos bearing his likeness. His death is greeted with relief and no little satisfaction, however, from the Irish nationalist community. 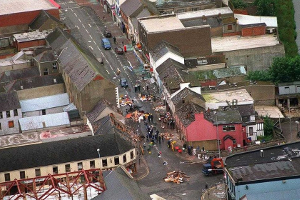 On the day of the bombing, the bombers drive a car, loaded with 230 kilograms (510 lb) of fertiliser-based explosives, across the Irish border. At approximately 2:19 PM they park the vehicle outside S.D. Kells’ clothes shop in Omagh’s Lower Market Street, on the southern side of the town centre, near the crossroads with Dublin Road. They are unable to find a parking space near the intended target, the Omagh courthouse. The two male occupants arm the bomb and, upon exiting the car, walk east down Market Street towards Campsie Road.

Three telephone calls are made warning of a bomb in Omagh, using the same codeword that had been used in the Real IRA’s bomb attack in Banbridge two weeks earlier. At 2:32 PM, a warning is telephoned to Ulster Television saying, “There’s a bomb, courthouse, Omagh, Main Street, 500 lb., explosion 30 minutes.” One minute later, the office receives a second warning saying, “Martha Pope (which is the RIRA’s code word), bomb, Omagh town, 15 minutes.” The caller claims the warning on behalf of “Óglaigh na hÉireann.” One minute later, the Coleraine office of the Samaritans receives a call stating that a bomb will go off on “Main Street” about 200 yards (180 m) from the courthouse. The recipients pass the information on to the Royal Ulster Constabulary (RUC), but are claimed to be inaccurate and police inadvertently move people towards the bomb.

The car bomb detonates at 3:10 PM in the crowded shopping area. The bombing kills 29 people, including a woman pregnant with twins, and injures some 220 others. Twenty-one people who are in the vicinity of the vehicle die at the scene. Eight more people die on the way to or in the hospital. The death toll is higher than that of any single incident during what are considered “the Troubles.”

The bombing causes outrage both locally and internationally, spurs on the Northern Ireland peace process, and deals a severe blow to the Dissident republican campaign. The Real IRA apologises and declares a ceasefire shortly afterwards. The victims include people from many backgrounds: Protestants, Catholics, a Mormon teenager, five other teenagers, six children, a mother pregnant with twins, two Spanish tourists, and others on a day trip from the Republic of Ireland. Both unionists and Irish nationalists are killed and injured.

It is alleged that the British, Irish and U.S. intelligence agencies have information which could have prevented the bombing, most of which comes from double agents inside the Real IRA. This information is not given to the local police, the Royal Ulster Constabulary (RUC). In 2008 it is revealed that British intelligence agency, Government Communications Headquarters, was monitoring conversations between the bombers as the bomb was being driven into Omagh.

A 2001 report by the Police Ombudsman says that the RUC Special Branch failed to act on prior warnings and slammed the RUC’s investigation of the bombing. The RUC has obtained circumstantial and coincidental evidence against some suspects, but it has not come up with anything to convict anyone of the bombing. Colm Murphy is tried, convicted, and then released after it is revealed that Garda Síochána forged interview notes used in the case. Murphy’s nephew, Sean Hoey, is also tried and found not guilty.

In June 2009, the victims’ families win a GB£1.6 million civil action against four defendants. In April 2014, Seamus Daly is charged with the murders of those killed, however, the case against him is withdrawn in February 2016.