Joe Cahill, a prominent figure in the Irish Republican movement in Northern Ireland and former Chief of Staff of the Provisional Irish Republican Army (IRA), is born in Belfast on May 19, 1920.

Cahill is educated at St. Mary’s Christian Brothers’ Grammar School. At age 14 he leaves school to assist in his father’s print shop. Soon after, he joins the Catholic Young Men’s Society, which campaigns on social issues with a focus on eradicating moneylenders from working-class areas of Belfast, as they often charge usurious interest rates. At the age of seventeen, he joins Na Fianna Éireann, a republican-orientated Scouting movement. Na Fianna Eireann is regarded as the “Junior Irish Republican Army.”

Cahill joins the local Clonard-based ‘C’ Company of the Belfast Brigade of the Irish Republican Army in 1938. Four years later, during an anniversary march by the IRA for the Easter Rising, he gets into a shootout with five other IRA men against four Royal Ulster Constabulary (RUC) officers. Several men are wounded and Constable Patrick Murphy is killed. Cahill and four of the other men spend time in prison in Belfast. The IRA declares a formal ceasefire in 1945. Afterwards, republican prisoners begin to be released. Cahill is released in October 1949.

The IRA launches a new campaign in 1956. The IRA border campaign attacks ten targets in six counties, damaging bridges, courthouses and border roads. By 1957, three RUC officers and seven republicans have been killed during the campaign. Cahill is arrested and interned in January 1957 with several other republicans. He is released from internment in April 1961. Following his release from prison, he is disappointed at the direction of the IRA and resigns from the organisation around 1962.

In 1969, Cahill is a key figure in the founding of the Provisional Irish Republican Army. During his time in the Provisional IRA, he helps import weapons and raise financial support. He serves as the chief of staff in 1972, but is arrested the following year when a ship importing weapons was intercepted.

After his release, Cahill continues to serve on the IRA Army Council and leads all financial dealings for Sinn Féin. In the 1990s, the IRA and Sinn Féin begin to work on seeking peace. Cahill serves on the council that calls a cessation on July 21, 1996. He attends several of the talks that finally lead to the Good Friday Agreement on April 10, 1998. Shortly after the agreement is made, he resigns as treasurer of Sinn Féin. To honour his service, he is made honorary Sinn Féin Vice-President for life. He serves the Republican movement in Ireland all his life, as one of the longest-serving political activists in Ireland of any political party.

Cahill dies at age 84 in Belfast on July 23, 2004. He had been diagnosed with asbestosis, which he probably developed while working at the Harland & Wolff shipyards in his twenties. He and several other former shipyard workers later sue the company for their exposure to the dangerous substances but only win minimal compensation. 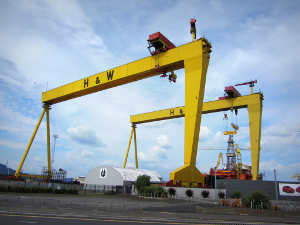 Samson and Goliath, the twin shipbuilding gantry cranes situated in the shipyard of Harland & Wolff at Queen’s Island, Belfast, are listed on October 9, 2003, as historic monuments to ensure their preservation. The cranes, which are named after the Biblical figures Samson and Goliath, dominate the Belfast skyline and are landmark structures of the city.

The cranes are constructed by the German engineering firm Krupp, with Goliath being completed in 1969 and Samson in 1974. Goliath, the smaller of the cranes, stands 315 feet tall, while Samson stands 348 feet in height. Goliath sits slightly further inland closer to Belfast City. At the time Harland & Wolff is one of the largest shipbuilders in the world. The announcement that they are to be built is an important event at the time.

Each crane has a span of 459 feet and can lift loads of up to 840 tonnes to a height of 230 feet, making a combined lifting capacity of over 1,600 tonnes, one of the largest in the world. Prior to commissioning, the cranes are tested up to 1,000 tonnes, which bends the gantry downwards by over 12 inches. The dry dock at the base of the cranes is the largest in the world measuring 1,824 feet × 305 feet.

At its height, Harland & Wolff boasts 35,000 employees and a healthy order book, but in the years following the construction of the cranes, the workforce and business declines. The last ship to be launched at the yard to date is a roll-on/roll-off ferry in March 2003. Since then the yard has restructured itself to focus less on shipbuilding and more on design and structural engineering, as well as ship repair, offshore construction projects and competing for other projects to do with metal engineering and construction. Initially there is concern that the now largely redundant cranes would be demolished. However, on October 9, 2003 they are scheduled as historic monuments under Article 3 of the Historic Monuments and Archaeological Objects (Northern Ireland) Order 1995.

Northern Ireland Office Minister of the time Angela Smith states, “These cranes are an essential part of our city, our roots and our culture.” The cranes are not, technically, “listed buildings,” but are recognised by the Northern Ireland Environment Agency as buildings of “architectural or historic interest.”

Shipbuilding has ceased in Belfast, but the cranes are retained as part of the existing dry dock facility within the restructured shipyard, situated adjacent to the Titanic Quarter, a business, light industrial, leisure, and residential development on land now surplus to the heavy industrial requirements of the shipyard on Queen’s Island. They are kept in working order and used for heavy lifting by Harland & Wolff in its other activities.