On November 24, 1974, British police charge six men in connection with the Birmingham pub bombings three days earlier. Hugh Callaghan, Patrick Hill, Robert Hunter, Noel McIlkenny, William Power and John Walker are accused of the murder of the youngest victim of the attacks, Jane Davis, age 17, who is one of 19 people killed when bombs explode on November 21 in the Mulberry Bush at the foot of the Rotunda, and the Tavern in the Town, a basement pub in New Street.

A massive security operation is launched in Birmingham the following day when the six accused men appear in a hearing at the Victoria Law Courts. Assistant Chief Constable Maurice Buck, who is leading the investigation, says the six had been apprehended on the night of the attacks.

Five of the alleged bombers, who are from Northern Ireland but have been resident in England for at least eleven years, are arrested on the Belfast ferry at Heysham. Callaghan is arrested in Birmingham. All of the men had been living in the city, but Buck declines to give their addresses “for security reasons.”

The assistant chief constable tells reporters that the alleged bombers will be charged soon in connection with the deaths of the other 18 victims. “We are satisfied that we have found the men primarily responsible, but our inquiries will continue,” he says.

The so-called Birmingham Six are found guilty in August 1975 of carrying out the bombings and sentenced to life imprisonment. They are released after 16 years in jail when their convictions are quashed by the Court of Appeal in May 1991. One of the six, Paddy Hill states on his release, “The police told us from the start they knew we hadn’t done it. They didn’t care who had done it.” The real bombers have never been prosecuted and no group has ever admitted planting devices.

Three detectives are charged with perjury and conspiracy in connection with the investigation, but their trial is halted in 1993 on the grounds of prejudicial media coverage.

The six men finally agree on undisclosed compensation settlements in June 2002 – more than ten years after they had been freed. 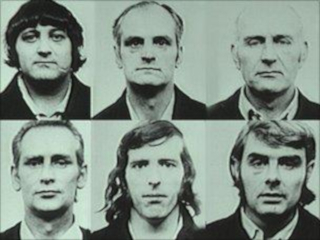 The Birmingham pub bombings take place on November 21, 1974 and are attributed to the Provisional Irish Republican Army. Explosive devices are placed in two central Birmingham pubs, the Mulberry Bush at the foot of the Rotunda and the Tavern in the Town in New Street. The resulting explosions, at 8:25 PM and 8:27 PM, collectively are the most injurious attacks in England since World War II. Twenty-one people are killed and 182 are injured. A third device, outside a bank in Hagley Road, fails to detonate.

Five of the six arrested are Belfast-born Roman Catholics, while John Walker is a Roman Catholic born in Derry. All six have lived in Birmingham since the 1960s. All the men except for Callaghan leave the city early on the evening of November 21 from New Street Station, shortly before the explosions. They are travelling to Belfast to attend the funeral of James McDade, a Provisional IRA member who had accidentally killed himself on November 14 when his bomb detonates prematurely while he is planting it at a telephone exchange in Coventry.

When they reach Heysham they and others are subject to a Special Branch stop and search. The men do not tell the police of the true purpose of their visit to Belfast, a fact that is later held against them. While the search is in progress the police are informed of the Birmingham bombings. The men agree to be taken to Morecambe police station for forensic tests.

On the morning of November 22, after the forensic tests and questioning at the hands of the Morecambe police, the men are transferred to the custody of West Midlands Serious Crime Squad police unit. Callaghan is taken into custody on the evening of November 22.

The Birmingham Six are charged with murder and conspiracy to cause explosions on May 12, 1975. The trial begins on June 9, 1975 at the Crown Court sitting at Lancaster Castle, before Justice Nigel Bridge and a jury. The jury finds the six men guilty of murder. On August 15, 1975, they are each sentenced to twenty-one life sentences.

On November 28, 1974, the Birmingham Six appear in court for a second time after they had been remanded into custody at HM Prison Winson Green, all showing bruising and other signs of ill-treatment. Fourteen prison officers are charged with assault in June 1975, but are ultimately acquitted. The Six bring a civil claim for damages against the West Midlands Police in 1977, but it is struck out on January 17, 1980 by the Court of Appeal (Civil Division).

In March 1976 the Birmingham Six’s first application for leave to appeal is dismissed by the Court of Appeal, presided over by John Widgery. Their second full appeal, in 1991, is allowed. New evidence of police fabrication and suppression of evidence, the successful attacks on both the confessions and the 1975 forensic evidence causes the Crown to decide not to resist the appeals. The Court of Appeal states that in light of the fresh scientific evidence, the convictions are both unsafe and unsatisfactory. On March 14, 1991 the Birmingham Six are set free.

The Birmingham Six – Paddy Joe Hill, Hugh Callaghan, Richard McIlkenny, Gerry Hunter, Billy Power and Johnny Walker – are released from jail on March 14, 1991 after their convictions for the murder of 21 people in two pubs are quashed by the Court of Appeal.

The Birmingham pub bombings take place on November 21, 1974 and are attributed to the Provisional Irish Republican Army. Explosive devices are placed in two central Birmingham pubs – the Mulberry Bush at the foot of the Rotunda and the Tavern in the Town, a basement pub in New Street. Up until this point, the resulting explosions collectively are the most injurious attacks in Great Britain since World War II. Ten people at the Mulberry Bush and eleven at the Tavern in the Town are killed and 182 people are injured. A third device, outside a bank in Hagley Road, fails to detonate.

On May 12, 1975 the six men are charged with murder and conspiracy to cause explosions. The trial begins on June 9, 1975 at the Crown Court sitting at Lancaster Castle. After legal arguments the statements made in November are deemed admissible as evidence. The unreliability of these statements is later established. Forensic scientist Dr. Frank Skuse uses positive Griess test results to claim that Hill and Power had handled explosives. Callaghan, Hunter, McIlkenny and Walker all had tested negative. The jury finds the six men guilty of murder. On August 15, 1975, they are each sentenced to 21 life sentences.

In March 1976 their first application for leave to appeal is dismissed by the Court of Appeal. Their second full appeal, in 1991, is allowed. New evidence of police fabrication and suppression of evidence, the successful attacks on both the confessions and the 1975 forensic evidence causes the Crown to decide not to resist the appeals. The Court of Appeal states that “in the light of the fresh scientific evidence, which at least throws grave doubt on Dr. Skuse’s evidence, if it does not destroy it altogether, these convictions are both unsafe and unsatisfactory.” On March 14, 1991 the six walk free.

The success of the appeals and other miscarriages of justice cause the Home Secretary to set up a Royal Commission on Criminal Justice in 1991. The commission reports in 1993 and leads to the Criminal Appeal Act 1995 which establishes the Criminal Cases Review Commission in 1997. Superintendent George Reade and two other police officers are charged with perjury and conspiracy to pervert the course of justice but are never prosecuted. During the inquest into the bombings in 2016, Hill states that he knows the identities of three of the bombers who are still “free men” in Ireland. 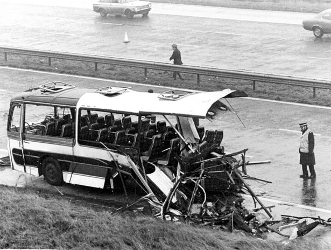 The M62 coach bombing occurs on February 4, 1974 on the M62 motorway in Northern England, when a Provisional Irish Republican Army (IRA) bomb explodes in a coach carrying off-duty British Armed Forces personnel and their family members. Twelve people, nine soldiers and three civilians, are killed by the bomb, which consists of 25 pounds of high explosive hidden in a luggage locker on the coach.

The coach has been specially commissioned to carry British Army and Royal Air Force personnel on leave with their families from and to the bases at Catterick and Darlington during a period of railway strike action. The vehicle departs from Manchester and is making good progress along the motorway. Shortly after midnight, when the bus is between junction 26 and 27, near Oakwell Hall, there is a large explosion on board. Most of those aboard are sleeping at the time. The blast, which can be heard several miles away, reduces the coach to a “tangle of twisted metal” and throws body parts up to 250 yards.

The explosion kills eleven people outright and wounds over fifty others, one of whom dies four days later. Amongst the dead are nine soldiers – two from the Royal Artillery, three from the Royal Corps of Signals, and four from the 2nd battalion Royal Regiment of Fusiliers. One of the latter is Corporal Clifford Haughton, whose entire family, consisting of his wife Linda and his sons Lee (5) and Robert (2), also die. Numerous others suffer severe injuries, including a six-year-old boy, who is badly burned.

The driver of the coach, Roland Handley, is injured by flying glass, but is hailed as a hero for bringing the coach safely to a halt. Handley dies at the age of 76 after a short illness in January 2011.

Suspicions immediately fall upon the IRA, which is in the midst of an armed campaign in Britain involving numerous operations, later including the Guildford pub bombing and the Birmingham pub bombings.

Reactions in Britain are furious, with senior politicians from all parties calling for immediate action against the perpetrators and the IRA in general. The British media are equally condemnatory. According to The Guardian, it is “the worst IRA outrage on the British mainland” at that time, whilst the BBC describes it as “one of the IRA’s worst mainland terror attacks.” The Irish newspaper The Sunday Business Post later describes it as the “worst” of the “awful atrocities perpetrated by the IRA” during this period.

IRA Army Council member Dáithí Ó Conaill is challenged over the bombing and the death of civilians during an interview, and replies that the coach had been bombed because IRA intelligence indicated that it was carrying military personnel only.

Following the explosion, the British public and politicians from all three major parties call for “swift justice.” The ensuing police investigation led by Detective Chief Superintendent George Oldfield is rushed, careless, and ultimately forged, resulting in the arrest of the mentally ill Judith Ward who claims to have conducted a string of bombings in Britain in 1973 and 1974 and to have married and had a baby with two separate IRA members. Despite her retraction of these claims, the lack of any corroborating evidence against her, and serious gaps in her testimony – which is frequently rambling, incoherent, and “improbable” – she is wrongfully convicted in November 1974.

The case against Ward is almost completely based on inaccurate scientific evidence using the Griess test and deliberate manipulation of her confession by some members of the investigating team. The case is similar to those of the Guildford Four, the Birmingham Six, and the Maguire Seven, which occur at the same time and involve similar forged confessions and inaccurate scientific analysis. Ward is finally released in 1992, when three Appeal Court judges hold unanimously that her conviction was “a grave miscarriage of justice,” and that it had been “secured by ambush.”