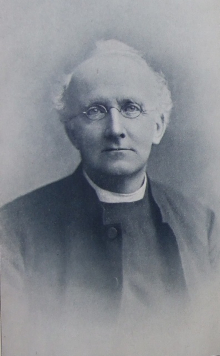 Samuel Haughton, scientist, mathematician, and doctor, is born in Carlow, County Carlow on December 21, 1821. He is “famous” for calculating the drop required to kill a hanged man instantly.

Haughton is the son of James Haughton. His father, the son of a Quaker, but himself a Unitarian, is an active philanthropist, a strong supporter of Father Theobald Mathew, a vegetarian, and an anti-slavery worker and writer.

Haughton has a distinguished career at Trinity College, Dublin and in 1844 he is elected a fellow. Working on mathematical models under James MacCullagh, he is awarded in 1848 the Cunningham Medal by the Royal Irish Academy. In 1847 he has his ordination to the priesthood but he is not someone who preaches. He is appointed as professor of geology at Trinity College in 1851 and holds the position for thirty years. He begins to study medicine in 1859. He earns his MD degree in 1862 from the University of Dublin.

Haughton becomes registrar of the Medical School. He focuses on improving the status of the school and representing the university on the General Medical Council from 1878 to 1896. In 1858 he is elected fellow of the Royal Society. He gains honorary degrees from Oxford, Cambridge and Edinburgh. At Trinity College Dublin he moves the first-ever motion at the Academic Council to admit women to the University on March 10, 1880. Through his work as Professor of Geology and his involvement with the Royal Zoological Society, he has witnessed the enthusiasm and contribution of women in the natural sciences. Although thwarted by opponents on the Council he continues to campaign for the admission of women to TCD until his death in 1897. It is 1902 before his motion is finally passed, five years after his death.

In 1866, Haughton develops the original equations for hanging as a humane method of execution, whereby the neck is broken at the time of the drop, so that the condemned person does not slowly strangle to death. “On hanging considered from a Mechanical and Physiological point of view” is published in the London, Edinburgh, and Dublin Philosophical Magazine and Journal of Science, Vol. 32 No. 213 (July 1866), calling for a drop energy of 2,240 ft-lbs. From 1886 to 1888, he serves as a member of the Capital Sentences Committee, the report of which suggests an Official Table of Drops based on 1,260 ft-lbs of energy.

Haughton writes papers on many subjects for journals in London and Dublin. His topics include the laws of equilibrium, the motion of solid and fluid bodies, sun-heat, radiation, climates and tides. His papers cover the granites of Leinster and Donegal and the cleavage and joint-planes of the Old Red Sandstone of Waterford.

Haughton is president of the Royal Irish Academy from 1886 to 1891, and secretary of the Royal Zoological Society of Ireland for twenty years. In 1880 he gives the Croonian Lecture on animal mechanics to the Royal Society.

Samuel Haughton dies on October 31, 1897 and is buried in the Church of the Holy Cross Cemetery in Killeshin, County Laois.