Ganly is one of five children born to Dermod O’Brien, a painter, and his wife Mabel Smiley. Her great-grandfather is the Irish Republican William Smith O’Brien. She grows up on a farm in Cahirmoyle, County Limerick, until the family moves to Fitzwilliam Square in Dublin. She goes on to attend the Metropolitan School of Art where she has the opportunity to study under Patrick Tuohy, Seán Keating and Oliver Sheppard. She is a talented sculptor and wins several awards, including the Taylor scholarship in 1929, for her allegorical male nude, Pity. She spends time in Paris in 1951 where she trains with André Lhote. She travels to Greece where Lhote continues to influence her work.

Ganly also studies painting in the Royal Hibernian Academy School where she has Margaret Clarke and Seán O’Sullivan as teachers. She is made an associate of the Royal Hibernian Academy (RHA) in 1928 and becomes a member in 1935 though, in 1969, resigns her membership in protest of the lack of young artists being given the opportunity to exhibit. In 1972 she is made an honorary member and returns.

Ganly is a representational artist and while known as a portrait artist, she also paints landscapes, interiors and may be best known for her still lifes. Some of her best works are portraits of her husband, her sister Ethel, her father, and her friend Sheila Pim. She illustrates the book-jackets of Sheila Pim’s works. She has many exhibitions, with the RHA and the Water Colour Society of Ireland. There is a retrospective of her life in 1998 at the Hugh Lane Gallery and her works are in the collections there. She is also in the collections of the Waterford Municipal Gallery, Crawford Art Gallery, Cork and in The National Self-Portrait Collection of Ireland. She is part of the 2014 exhibition ‘Irish Women Artists: 1870-1970.’

Ganly’s sister-in-law is Kitty Wilmer O’Brien with whom she often exhibits. She marries Andrew Ganly, a dental surgeon and writer with a strong involvement in theatre, in 1936. He dies in 1982. They have two children, Eoghan and Phillida. 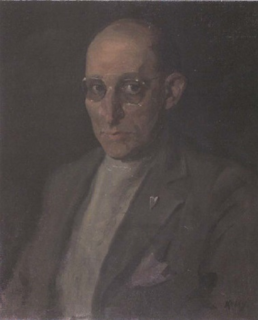 Harry Aaron Kernoff, Irish painter of London/Russian extraction, is born in London on January 10, 1900. He is primarily remembered for his sympathetic interest in Dublin and its people.

Kernoff’s family moves to Dublin when he is 14 years old where he ultimately becomes a leading figure in Irish modernism. He studies drawing and painting during night classes at the Metropolitan School of Art. In 1923, he wins the Taylor Scholarship and becomes a full-time art student. During his studies he meets and is encouraged by fellow artists Patrick Tuohy (1894-1930), Seán Keating (1889-1977), and Maurice MacGonigal (1900-79).

Influenced by Keating, he paints the Irish landscape, genre scenes, portraits, street and pub scenes, as well as Dublin landmarks with sympathy and understanding. This is particularly evident in his woodcuts. While living in his adopted Dublin Jewish community he produces picture illustrations of his local scenes for a neighbourhood writer and friend Nick Harris for his book entitled Dublin’s Little Jerusalem.

In 1930, Kernoff visits the Soviet Union as part of an Irish delegation from the friends of Soviet Russia led by Hanna Sheehy-Skeffington. While visiting, he is influenced by the Association of Artists of Revolutionary Russia. He is famously associated with Davy Byrne’s pub. His paintings and woodcuts of Davy Byrne’s pub are documents of his friendship with the original owner.

Kernoff spends the vast majority of his life unappreciated, and makes little or nothing from his paintings until a few years before his death, when he begins to be appreciated by contemporary critics. He never marries.

Outside his home in Dublin, where he lives with two unmarried sisters, there is a long-standing sign in the front garden which says “… Descendants of the Abravanels…” The Abravanel (or Abrabanel) family is one of the most famous Sephardic Jewish families in history, noted for their large quotas of Rabbis, scholars, and members of a variety of scientific and artistic fields, dating from about the 13th century in Lisbon. The emergence of the famous philosopher and scholar Don Isaac Abravanel in the middle of the 16th century brings his works to greater universal recognition.