The Carnew executions, the summary execution of 28 prisoners being held as suspected United Irishmen by the local garrison in the British army barracks base of Carnew Castle, Carnew, County Wicklow, takes place on May 25, 1798.

The Society of United Irishmen having failed to advance its aims of Catholic emancipation and parliamentary reform by political means, instigate a rebellion against British rule. The rebellion begins on the morning of May 24, 1798, but the only significant uprisings outside of the province of Ulster occur in counties Wicklow and Wexford, both south of County Dublin. The rebels are met with a swift response from British forces and the bulk of the rebellion is suppressed within a year.

By the morning of the May 25, news of the long-expected outbreak of the 1798 rebellion in neighbouring County Kildare and of military losses in the battles of Ballymore-Eustace, Naas, and Prosperous have reached the garrison in Carnew, who decide to take preventative measures by assembling the rebel suspects in detention. The suspects are marched from Carnew Castle to the local Gaelic handball alley and executed by firing squad as a warning to the local populace.

A similar mass execution of 36 nationalist prisoners occurs on the following day at Dunlavin Green.

News of the summary executions, together with news of the similar massacre at Dunlavin, spread throughout County Wicklow and across the border into County Wexford, giving substance to the rumours of widespread killing already prevalent. On June 7, the town is burned and sacked in a revenge raid by Wexford rebels, led by Anthony Perry. 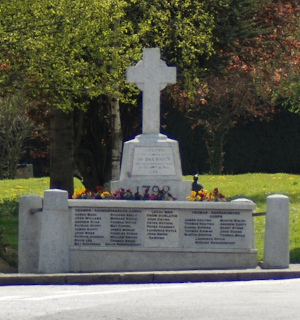 The Dunlavin Green executions, the summary execution of 36 suspected rebel prisoners in County Wicklow by the British military shortly after the outbreak of the Irish Rebellion of 1798, take place on May 26, 1798. There are several accounts of the events, recorded at differing times and differing in detail.

The British government had begun raising yeomanry forces from the local Irish population in 1796. The force, composed of both Catholics and Protestants, was raised to help defend against a possible French invasion of Ireland and to aid in the policing of the country. The Society of United Irishmen have long threatened a rebellion in Ireland, which finally occurs in late May 1798. Major uprisings of the rebellion only occur in Ulster, Wicklow and Wexford, a county in the province of Leinster. For several months prior to May 1798, Wicklow and many other areas of the country have been subject to martial law which had been imposed in an effort to prevent the long threatened rebellion.

The campaign extends against the military itself as some corps of yeomen and militia, especially those with Catholic members, are suspected as United Irish infiltrators who have joined to get training and arms. Several days after the outbreak of the rebellion, the yeomanry and militia at Dunlavin are called out on parade and informed by their commanding officer that he has information on the identities of those in the corps who are affiliated with the United Irishmen among them. The British do not actually have such information, but twenty-eight fall for their bluff and come forward in hopes of receiving clemency.

Those who come forward are immediately arrested and imprisoned while several are subjected to flogging in an effort to extract information about the rebels plans and organization. Those who are outed as affiliates of the United Irishmen are imprisoned in the Market House of Dunlavin, while the British officers decide what to do with them.

The following day, Captain William Ryves of the Rathsallagh yeomanry has his horse shot from under him by rebels while on patrol. Ryves rides to Dunlavin the next day and brings eight suspected rebels imprisoned by his corps with him. There he meets with Captain Saunders of the Saunders-grove yeomanry. It is decided that their prisoners, a total of 36 men, should be put to death. On May 26, Market Day, the 36 are taken to the green, lined up and shot in front of the townspeople, including, in some cases, their own families.

The firing squad returns to the Market House where others are flogged or hanged. Before the bodies of the shot men are removed, soldiers’ wives loot them of valuables. The bodies are either removed for burial by their families or interred in a common grave at Tournant cemetery. One man survives, despite grievous wounds, and lives to “an advanced age.” Two more men, either hanging or about to be, are saved by the intervention of a “respectable Protestant” and escape.

One loyalist account details the events leading up to the execution differently. According to this account, Captain Ryves, a yeomanry commander at Dunlavin, receives word that a large number of rebels are set to attack Dunlavin and he observes that many Protestant houses have been set on fire in the surrounding countryside. Under the circumstances, he expects that the rebels’ intention is a pogrom of Protestants and loyalists in the town and its environs. A foray by the troops into the countryside fails and the garrison’s officers are aware that they are outnumbered by the prisoners held in the Market House.

The executions appear to have been motivated by simple revenge and intimidation, rather than fear of the prisoners and the ongoing rebellion. Though the public exhibition may have been designed to intimidate and discourage rebels in the immediate area from taking to the field, news of the executions, as well as those at Carnew spread rapidly and play a part in the rapid mobilization of rebels in northern County Wexford over the next few days.

The story of Dunlavin Green is quickly commemorated in the famous ballad “Dunlavin Green,” which tells the story from the view of a sympathetic local eyewitness. In 1998, a commemorative stone was installed in St. Nicholas of Myra Roman Catholic church, adjacent to the green. 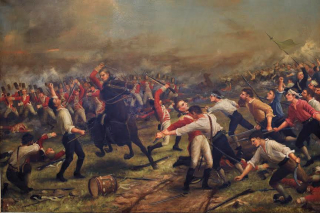 The Battle of Oulart Hill takes place on May 27, 1798 when a rebel gathering of between 4,000 and 5,000 massacre a detachment of 110 militia sent from Wexford town to stamp out the spreading rebellion in County Wexford.

When news of the long expected rising on May 23 of the Society of United Irishmen in the midlands reaches County Wexford, it is already in an unsettled condition due to fears brought by the recently instituted anti-insurgent disarmament campaign in the county. The measures used included pitchcapping, half-hanging, and house burnings to uncover rebel conspirators. The recent arrival in Wexford of the North Cork Militia, who are notorious for their brutality in the “pacification” of Ulster, terror raids by local yeomen and finally news of the massacres at Dunlavin Green, Carlow and Carnew, have the effect of drawing people together in large groups for security, especially at night.

One such group of one hundred or so gather on the evening of May 26 at The Harrow, near the parish of Boolavogue under the tutelage of Fr. John Murphy, when they encounter a patrol of about 20 yeomen on their way to the house of a suspected rebel. They burn the suspect’s dwelling but, returning empty-handed, they encounter Fr. Murphy’s band again. The patrol are pushing their way through when a skirmish begins in which they lose two of their number, the rest fleeing with news of the killings.

The reaction on both sides is rapid. Vengeful yeomanry patrols roam, burning and killing indiscriminately, while the rebels rouse the countryside and make several raids on manors and other houses holding arms, killing more loyalists and yeomen. News of the skirmish and raids has by now reached Wexford town and, on the morning of May 27, the bulk of its garrison, 110 of the North Cork militia under Colonel Foote, are ordered north to crush the nascent rebellion. They are joined en route by some 16 yeomen cavalry under Colonel Le Hunt. However, these yeomanry are of doubtful loyalty, many (including their sergeant) having joined the rebels that morning.

The militia reaches the village of Oulart at 2:00 PM on May 27. Finding a mass of “from four to five thousand combatants” occupying the high ground of Oulart hill, they rashly advance and pursue the rebels to the summit. The rebel leaders mistakenly believe a large body of yeoman cavalry is waiting to intercept their flight, so their forces desperately turn to face their enemy and kill the whole detachment in an instant, leaving only the commanding officer, Colonel Foote, and four other survivors to escape to their base at Wexford.

Foote reports that, contrary to his orders, the militia had advanced incautiously and were surrounded and overpowered by the overwhelming rebel numbers, mostly armed with pikes, and that “great numbers” of the rebels were killed.

Following the rebel victory, almost all of North Wexford joins the rebellion. Crown forces and loyalist civilians cede control of the countryside, withdrawing to towns such as Enniscorthy, Gorey and Wexford.