Margaret Louisa Aylward, Roman Catholic nun, philanthropist, and founder of the Sisters of the Holy Faith, is born to a wealthy merchant family on November 23, 1810 in Thomas Street in Waterford, County Waterford.

Aylward is educated by the Ursuline nuns in Thurles, County Tipperary. After doing some charitable work in Waterford in her early years, she joins her sister in the Sisters of Charity in 1834 as a novice. She leaves the novitiate in 1836 and returns to Waterford to continue her charity work in a secular role. She again attempts to join a religious order in 1846 when she enters the Ursuline novitiate in Waterford, however she leaves after two months.

By 1851, Aylward has moved to Dublin where she is active in re-energising the Ladies’ Association of the Society of St. Vincent de Paul. The Great Famine leads to a large-scale movement of people from rural areas into cities, including Dublin, which leads to increased pressure on the charitable institutions of these areas. Her efforts are part of this wider charitable effort to help the poor, particularly Catholics who are seen to be at risk of coercive religious conversion (known as Souperism). This association is concerned with the “temporal as well as the spiritual relief of the sick poor in Dublin.”

The Ladies’ Association of St. Vincent de Paul opens St. Brigid’s in 1856, an orphanage which has an anti-proselytising mission and claims to rescue Catholic children from Protestant agencies. The Ladies’ Association often comes into dispute with those involved in the Irish Church Missions (ICM) and the ragged schools in Dublin, with members of the Ladies’ Association distributing crucifixes to children attending the Protestant-run ragged schools and visiting the homes of parents who send their children to them. The women involved in St. Brigid’s Orphanage organise themselves into a society called the Daughters of St. Brigid. However, while the establishment of St. Brigid’s brings Aylward closer to religious orders, historian Maria Luddy notes that in the 1850s, she is not concerned with the establishment of a religious community, rather she wants to “live in a community of women who were united by their religious convictions but did not necessarily desire to take formal religious vows.”

There is a growth in religious orders for women in Ireland from the early nineteenth century due to a relaxing of anti-Catholic Penal Laws. These include the Irish Sisters of Charity who are established in 1815 under Mary Aikenhead, the Sisters of Loreto order (1822) under Frances Ball, and Catherine McAuley‘s Sisters of Mercy (1831). Archbishop Paul Cullen of Dublin is an important figure in persuading leaders of religious communities of women, like Catherine McAuley, to formally organise as religious congregations in order to continue their charitable work and be respectable. While Aylward is resistant to this idea for a while, she eventually agrees. In 1857 the Sisters of the Holy Faith are established, and in 1869 the order are approved by Pope Pius IX.

Aylward is arrested in 1860 for “failing to produce a child named Mary Matthews, who had been taken away and concealed from her parents for the purpose of being brought up in the Roman Catholic faith.” Matthews had been placed with a nurse in Saggart, County Dublin, when her father had died and her mother had emigrated to The Bahamas. When her mother returns, Aylward is notified by Matthews’ foster mother that she is missing. Aylward is acquitted of the charge of kidnapping but is found to be in contempt of court and serves six months in jail. She continues her work after her release.

Aylward (now Sister Mary Agatha) dies on October 11, 1889. She had continued wearing her own clothes and travelling after taking her religious vows.

Historian Margaret Helen Preston argues that Aylward is unusual for the time that she lives in because she does not believe that poverty results from sin. Aylward refers to the poor as the “Elect of God” and argues that God sees the poor as special because of their difficult circumstances.

The Sisters of the Holy Faith still work around the world. 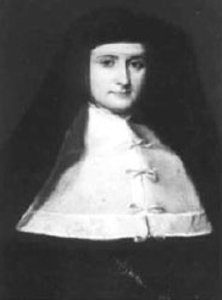 Mother Frances Mary Teresa Ball, foundress of the Irish Branch of the Institute of the Blessed Virgin Mary (IBVM), is born in Dublin on January 9, 1794.

Ball is the youngest of six children born to John and Mable Clare Bennet Ball. Her father is a wealthy silk weaver. Catholicism is still suppressed in Ireland at this time. She is therefore sent to England at the age of nine to the Bar Convent in York. Henry James Coleridge describes her as “a bright, quiet, high spirited girl, fond of fun, and with much depth of character.” In these times students do not return home for Easter, Christmas or summer holidays. They stay at the school, and live like religious people, until they leave school, usually in their late teens.

In 1807, her eldest sister, Cecilia is professed at the Ursuline convent in Cork. Ball travels from Dublin to Cork for the ceremony, where she meets Mary Aikenhead. Cecilia Ball takes the name of Sister Francis Regis and is within a few years made Superior of the convent in Cork. Upon the death of her father in 1808, Ball returns to Dublin. She is expected to make an admirable wife for the son and heir of some rich Catholic Dublin merchant family.

In June 1814, under the direction of Dr. Daniel Murray, Archbishop of Dublin, Ball returns to York and enters the novitiate of the Institute of the Blessed Virgin Mary. There she receives her religious training, and makes her profession in September 1816, taking, in religion, the name of Mary Teresa.

Recalled by Archbishop Murray, Ball returns to Dublin in 1821 with two novices to establish the Irish Branch of the Institute of the Blessed Virgin Mary for the instruction of children. They stay with Mary Aikenhead and the Irish Sisters of Charity in Stanhope Street while Rathfarnham House is being renovated. In 1822 she opens the first institution of the order in Ireland, in Rathfarnam House, four miles from Dublin. She decides to call the house “Loreto” after the village in Italy to which the Nazareth house of the Holy Family is said to have been miraculously transported.

Ball is a woman of great piety and administrative ability. Her energies are devoted to the establishment of schools and to the development of the sisterhood which now has members in many countries. The first offshoot is planted in Navan, County Meath, in the year 1833. The year 1840 is marked by the erection of the first church in Ireland dedicated to the Sacred Heart, in Loretto Abbey, Rathfarnham. In addition to the boarding and day schools the sisters conduct orphanages.

For almost forty years after bringing the IBVM to Ireland, Ball establishes a wide network of convents and schools across Ireland, as well as in India, Mauritius and Canada. The nuns are usually called Sisters of Loreto after the shrine at Loreto, Marche in Italy.

Mother Mary Teresa Ball dies at Rathfarnham Abbey on May 19, 1861 after a long illness.