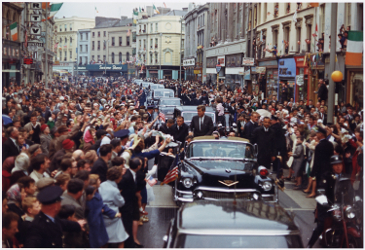 John F. Kennedy, an Irish American and the first Catholic to become president of the United States, arrives in Ireland on a state visit on June 26, 1963. After Air Force One touches down at Dublin airport, Kennedy’s motorcade weaves through the streets of Dublin city, the thrilled crowd, lacking ticker tape, improvises by throwing rolls of bus tickets.

Kennedy is proud of his Irish roots and makes a special visit to his ancestral home in Dunganstown, County Wexford, while in the country. There, he is greeted by a crowd waving both American and Irish flags and is serenaded by a boys choir that sings The Boys of Wexford. Kennedy breaks away from his bodyguards and joins the choir for the second chorus, prompting misty-eyed reactions from both observers and the press.

Kennedy meets with 15 members of his extended Irish family at the Kennedy homestead in Dunganstown. There he enjoys a cup of tea and some cake and makes a toast to “all those Kennedys who went and all those Kennedys who stayed.” His great-grandfather, Thomas Fitzgerald, had left Ireland for the United States in the middle of the Great Famine of 1848 and settled in Boston, becoming a cooper. Generations of his descendants go on to make their mark on American politics.

At the time of JFK’s visit to Ireland, the predominantly Catholic Irish Republic has been an independent nation for 41 years. The northern counties of the island, however, remain part of the largely Protestant British Empire and still suffer from long-standing sectarian violence. On the day after his arrival in Dublin, Kennedy speaks before the Irish parliament, where he openly condemns Britain’s history of persecuting Irish Catholics. Two days later, he travels to England, America’s oldest ally, to meet with British Prime Minister Harold MacMillan and his cabinet to discuss setting up a pro-democratic regime in British Guiana.

Kennedy later tells his aides that his favourite part of the trip was the wreath laying and silent funeral drill done by the Irish Army cadets at Arbour Hill military cemetery in Dublin.

Five months later, his widow, Jacqueline Kennedy, makes a special request to the Irish government. She asks that those same Irish army cadets, who so impressed the President on his visit, perform the drill again at his state funeral. Within days, those awe-stuck, trembling young men stand just inches away from foreign dignitaries from over 90 countries and perform their silent funeral drill in memory of a president that had inspired their country just a few short months earlier.