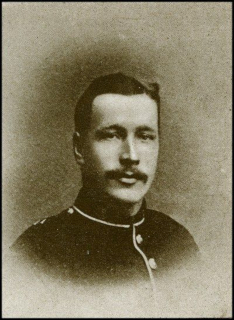 John Barry is born on February 1, 1873 in St. Mary’s Parish, Kilkenny, County Kilkenny. He is by birth an Irish recipient of the Victoria Cross (VC), the highest and most prestigious award for gallantry in the face of the enemy that can be awarded to British and Commonwealth forces.

Little is known of Barry’s early life prior to his enlistment with the 1st Battalion, Royal Irish Regiment of the British Army. Shortly after his enlistment, he finds himself sailing to South Africa for the outbreak of the Second Boer War, a conflict which ultimately leads to the award of the Victoria Cross, albeit tragically posthumously.

During the night attack on Monument Hill on January 7-8, 1901, Private Barry, although surrounded and threatened by the Boers at the time, smashes the breach of the Maxim gun, thus rendering it useless to its captors. It is in doing this splendid act for his country that he meets his death.

Barry dies of wounds received during his VC action at Monument Hill, South Africa. At the time, no posthumous awards of the VC can be made. However, as so often in the history of the Victoria Cross it is an individual, the mother of Alfred Atkinson, that brings about a decisive move to investigate those servicemen who would have been recommended for the award of the VC if they had not died beforehand. The outcome of the War Office investigation results in an announcement being published in The London Gazette on August 8, 1902. In fact, Barry’s family had already received his medal via registered post on April 30, 1902.

Barry is buried in Belfast Cemetery, east of Johannesburg, South Africa. His medals are sold at auction on September 22, 2000 and purchased at a hammer price of £85,000 by the Ashcroft Trust and displayed in the Lord Ashcroft Gallery in the Imperial War Museum, London. 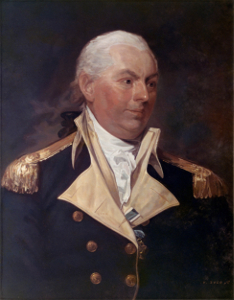 After the war, Barry becomes the first commissioned U.S. naval officer, at the rank of commodore, receiving his commission from President George Washington in 1797.

Barry is born on March 25, 1745, in Tacumshane, County Wexford. When his family is evicted from their home by their British landlord, they move to Rosslare on the coast, where his uncle works a fishing skiff. As a young man, Barry determines upon a life as a seaman and he starts out as a ship’s cabin boy.

Barry receives his first captain’s commission in the Continental Navy on March 14, 1776, signed by John Hancock, president of the Continental Congress. Barry is a religious man and begins each day at sea with a reading from the Bible. He has great regard for his crew and their well being and always makes sure they are properly provisioned while at sea.
During his naval career Barry commands the USS Delaware, USS Lexington, USS Raleigh, and USS Alliance.

On February 22, 1797, he is issued Commission Number 1 by President George Washington, backdated to June 4, 1794. His title is thereafter “commodore.” He is recognized as not only the first American commissioned naval officer but also as its first flag officer.

Appointed senior captain upon the establishment of the U.S. Navy, he commands the frigate USS United States in the Quasi-War with the French Republic. This ship transports commissioners William Richardson Davie and Oliver Ellsworth to France to negotiate a new Franco-American alliance.

Barry’s last day of active duty is March 6, 1801, when he brings USS United States into port, but he remains head of the Navy until his death.

Barry dies of asthma on September 13, 1803, at Strawberry Hill, in present-day Philadelphia, and is buried in the graveyard of Old St. Mary’s Roman Catholic Church in Center City, Philadelphia.

The Ancient Order of Hibernians (AOH) is founded in the United States on May 4, 1836, at St. James’ Roman Catholic Church in New York City, near the old Five Points neighbourhood. A branch is formed the same year at Pottsville, Pennsylvania. The existence and activities of the Order are concealed for some years.

The Ladies Ancient Order of Hibernians (LAOH) raises $50,000 to build the Nuns of the Battlefield sculpture in Washington, D.C., which the United States Congress authorises in 1918. The Irish American sculptor, Jerome Connor, ends up suing the Order for non-payment.

In 1982, in a revival of Hibernianism, the Thomas Francis Meagher Division No. 1 forms in Helena, Montana, dedicated to the principles of the Order and to restoring a historically accurate record of Brigadier General Meagher’s contributions to Montana. Soon after, six additional divisions form in Montana.

The Order organises the New York City St. Patrick’s Day Parade for 150 years, emphasising a conservative Catholic interpretation of the Irish holiday. In 1993 control is transferred to an independent committee amid controversy over the exclusion of Irish-American gay and lesbian groups.

In 2013, The Ancient Order of Hibernians raises and distributes over $200,000 to aid victims of Hurricane Sandy.

In 2014, the AOH calls for a boycott of Spencer’s Gifts, for selling products the AOH says promote anti-Irish stereotypes and irresponsible drinking.

On May 10, 2014 a memorial to Commodore John Barry, an immigrant from Wexford who is a naval hero of the American Revolution and who holds commission number one in the subsequent United States Navy, is dedicated on the grounds of the United States Naval Academy. The memorial and associated “Barry Gate” is presented to the Academy by the members of the Ancient Order of Hibernians.

Several buildings of the Ancient Order of Hibernians are listed on the U.S. National Register of Historic Places or are otherwise notable.