Robert John Gibbings, Irish artist and author most noted for his work as a wood engraver and sculptor, and for his books on travel and natural history, is born into a middle-class family in Cork, County Cork on March 23, 1889. Along with Noel Rooke he is one of the founder members of the Society of Wood Engravers in 1920, and is a major influence in the revival of wood engraving in the twentieth century.

Gibbings’ father, the Reverend Edward Gibbings, is a Church of Ireland minister. His mother, Caroline, is the daughter of Robert Day, Fellow of the Royal Society of Antiquaries of Ireland and president of The Cork Historical and Archaeological Society. He grows up in the town of Kinsale where his father is the rector of St. Multose Church.

Gibbings studies medicine for three years at University College Cork before deciding to persuade his parents to allow him to take up art. He studies under the painter Harry Scully in Cork and later at the Slade School of Fine Art and the Central School of Art and Design.

During World War I Gibbings serves in the Royal Munster Fusiliers and is wounded at Gallipoli before eventually being invalided out of the army in 1918. He then resumes his studies in London.

Gibbings is very much at the centre of developments in wood engraving. He is a founder member and leading light of the Society of Wood Engravers, which he sets up with Noel Rooke in 1920. In 1922 he contributes two wood engravings, “Clear Waters” and “Hamrun,” to Contemporary English Woodcuts, an anthology of wood engravings produced by Thomas Balston, a director at Gerald Duckworth & Company and an enthusiast for the new style of wood engravings. In 1923 he receives a commission for a set of wood engravings for The Lives of Gallant Ladies for the Golden Cockerel Press, his most important commission to date at 100 guineas.

Gibbings is working on the wood engravings The Lives of Gallant Ladies when Hal Taylor, the owner of the press, becomes very ill with tuberculosis and has to put it up for sale. He seeks a loan from a friend, Hubert Pike, a director of Bentley Motors, to buy the press. He takes over in February 1924 and owns and runs the press until 1933.

Gibbings illustrates numerous books on travel and natural history, including Charles Darwin’s The Voyage of the Beagle, and writes a series of bestselling river books, notably Sweet Thames Run Softly. He does a huge amount to popularise the subject of natural history, travelling extensively through Polynesia, Bermuda and the Red Sea to gather inspiration for his work.

Gibbings is the first man to draw underwater, the illustrations filling his Penguin classic Blue Angels and Whales. He is one of the first natural history presenters on the BBC.

In September 1955 Gibbings and his wife, Patience, purchase Footbridge Cottage, a tiny beehive of a cottage in Gibbings’s words, in Long Wittenham on the banks of the River Thames. Life there suits him, and he has a period of tranquility that he had not known previously. They live there until he dies of cancer in an Oxford hospital on January 19, 1958. He is buried in the churchyard at Long Wittenham. The grave is marked by a simple headstone featuring his device of a crossed quill and graver, carved by Michael Black, a young sculptor who is a friend of Gibbings. 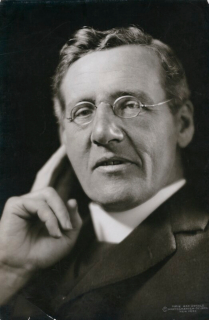 James Owen Hannay, Irish clergyman and prolific novelist who writes under the pen name of George A. Birmingham, is born on July 16, 1865 in Belfast. Today the house where he is born is a part of the administration building of Queen’s University Belfast.

Hannay receives his education in England. He enters Temple Grove School near the River Thames at the age of nine, and later studies at a public school called Haileybury School. He then returns to Ireland to enter the Divinity School of Trinity College Dublin. He is ordained in 1889 as a Church of Ireland (Anglican) minister and starts working as a curate for Delgany, County Wicklow, a seaside town south of Dublin.

To make up for a deficiency in their living Hannay writes a short story and sends it to a London publisher. It is accepted for publication and he receives a check of ￡10. On his wife’s advice, he gives up writing fiction and commits himself to the study of Christian theology with her. This bears fruit with the publications of The Spirit and Origin of Christian Monasticism (1903) and The Wisdom of the Desert (1904).

Hannay then serves as rector of Holy Trinity Church in Westport, County Mayo. It is here that he makes his debut as a novelist. His early writings raise the ire of nationalist Catholics, and he withdraws from the Gaelic League in the wake of ongoing protests about the tour of his successful play General John Regan.

Hannay becomes rector of Kildare parish from 1918 to 1920, and after serving as chaplain to the Lord Lieutenant of Ireland, he joins the British ambassadorial team in Budapest in 1922. He returns to officiate at Mells, Somerset from 1924 to 1934, after which he is appointed vicar of Holy Trinity Church in the London suburb of Kensington where he serves from 1934 until his death in London on February 2, 1950.

Hannay enjoys sailing, and is taught the rudiments by his father and grandfather in Belfast. When he is based in Westport, the financial success of his writing enables him to purchase a boat, a Dublin Bay Water Wag. In recognition of Hannay, the Water Wag Club of Dun Laoghaire returns to Westport and Clew Bay in 2016. In the frontispiece of his book The Inviolable Sanctuary Hannay includes a picture of the Water Wag.

The Queen, the first ship delivering Irish convicts, arrives at the penal settlement of Botany Bay in New South Wales, Australia on September 26, 1791. About 30% of all Australians are of Irish birth or descent. Many emigrated freely but many are descended from convicts transported there in the early years of the colony.

Britain has a policy of transportation. Up until the American Revolution most are sent to the American colonies or the West Indies. By the 1780s, Britain badly needs prison space. Petty criminals are housed on overcrowded prison ships anchored on the River Thames. In 1786, the government decides to start a prison settlement in the new colony at Botany Bay.

The transportation is arranged by a private company and those convicts who arrive there are actually the lucky ones, as conditions on the journey are horrendous and many die en route. The organisers of the transportation ships operate on a contract basis. They are paid a certain amount per head and the less provisions they give the prisoners the more profit they make.

The first two fleets of convict ships sail from England. The first ship to sail directly from Ireland is the Queen, which leaves Cork in April 1791 and joins the third fleet sailing from England. On board are 133 male convicts, 22 females and three children. The youngest on the ship is two-week-old Margaret, daughter of convict Sarah Brennan. The youngest convicts are 11-year-old David Fay and 12-year-old James Blake, convicted for stealing a pair of buckles. The oldest convict is 64-year-old Patrick Fitzgerald from Dublin, who is sentenced to seven years for stealing clothes. Seven men and one woman die on the voyage and within a year, half the men who had sailed on the Queen are dead. Young James Blake dies within a few months of landing.

The last convict ship sails from Ireland to Australia in 1853 and over the course of 60 years, 30,000 men and 9,000 women are transported for a minimum of seven years. While a good number of them are patriots and rebels – United Irishmen and Young Irelanders – the majority are transported for petty crimes.

Transportation continues for more than 60 years and is followed by assisted emigration. More than 100,000 travel on assisted passage during the 1850s alone. Some are assisted on their journey by charitable organisations in an effort to relieve distress. The last transportation ship, the Phoebe Dunbar, sails from Dun Laoghaire in 1853, bound for Perth. 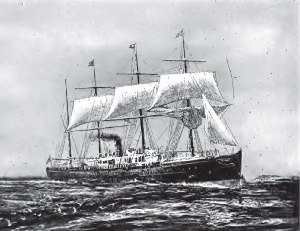 RMS Oceanic, the White Star Line‘s first liner built by Harland and Wolff in Belfast, is launched on August 27, 1870, arriving in Liverpool, England for her maiden voyage on February 26, 1871.

Three sister ships are constructed in rapid succession: RMS Atlantic, SS Baltic, and SS Republic. All are of the same approximate dimensions with differences in tonnage.

Powered by a combination of steam and sail, RMS Oceanic has twelve boilers generating steam for a single four-cylinder compound steam engine. A single funnel exhausts smoke and four masts carry sails. The hull is constructed of iron and divided into eleven watertight compartments. Passenger accommodations are located on the two decks concealed within the hull. RMS Oceanic can carry 166 First Class passengers, referred to as Saloon Passengers in the day and 1,000 Steerage Passengers, along with a 143-man crew. White Star spares no expense in her construction, and the contemporary press describes the ship as an “imperial yacht.”

RMS Oceanic leaves Liverpool for her maiden voyage on March 2, 1871 carrying only 64 passengers, under Captain Sir Digby Murray. Not long after departing, she has to return because of overheated bearings. Her voyage restarts on March 16. From that point onward, RMS Oceanic is a success for The White Star Line.

In January, 1872, RMS Oceanic undergoes a refit, during which a large forecastle is added to help prevent the bow being inundated during high seas. Two new boilers are added to increase steam pressure and thus engine power, and the four masts are shortened.

RMS Oceanic continues sailing with the White Star line on the Liverpool to New York City route until March 11, 1875, when she is chartered to the Occidental & Oriental Steamship Company, for service between San Francisco, Yokohama and Hong Kong. White Star provides the officers, while the crew is Chinese. The ship itself remains in White Star colours, but flies the O&O flag. During the repositioning voyage from Liverpool to Hong Kong, RMS Oceanic sets a speed record for that route. Later, she also sets a speed record for Yokohama to San Francisco in December 1876, and then breaks her own record over that route in November, 1889, with a time of 13 days, 14 hours and 5 minutes.

On January 7, 1890, Nellie Bly boards RMS Oceanic in Yokohama to cross the Pacific as part of her voyage Around the World in Seventy-Two Days. She arrives in San Francisco on January 21, 1890, which is a day behind schedule as a result of rough weather.

In 1895, RMS Oceanic is returned to White Star, which plans to put her back into service. She is sent back to Harland and Wolff for re-engining, but when the ship is inspected closely, it is found to be uneconomical to perform all the work needed. Instead, RMS Oceanic is sold for scrap, leaving Belfast for the last time on February 10, 1896, under tow, for a scrapyard on the River Thames.