George Derek Fleetwood Bell, harpist, pianist, oboist, musicologist and composer best known for his accompaniment work on various instruments with The Chieftains, dies unexpectedly on October 17, 2002 in Phoenix, Arizona during a recovery period from minor surgery.

Bell is born in Belfast, Northern Ireland. He is something of a child prodigy, composing his first concerto at the age of twelve. He graduates from the Royal College of Music in 1957. While studying there, he became friends with the flautist James Galway. From 1958 to 1990 he composes several classical works, including three piano sonatas, two symphonies, Three Images of Ireland in Druid Times (in 1993) for harp, strings and timpani, Nocturne on an Icelandic Melody (1997) for oboe d’amore and piano and Three Transcendental Concert Studies (2000) for oboe and piano.

As manager of the Belfast Symphony Orchestra, Bell is responsible for maintaining the instruments and keeping them in tune. Out of curiosity, he asks Sheila Larchet-Cuthbert to teach him how to play the harp. In 1965 he becomes an oboist and harpist with the BBC Northern Ireland Orchestra. He serves as a professor of harp at the Academy of Music in Belfast.

Bell is briefly featured in a 1986 BBC documentary, The Celts, in which he discusses the role and evolution of the harp in Celtic Irish and Welsh society. He also appears with Van Morrison at the Riverside Theatre at the University of Ulster in April 1988.

Bell is an admirer of the music of Nikolai Karlovich Medtner and is the co-founder, with the bass-baritone Hugh Sheehan, of the first British Medtner Society which gives a series of successful concerts of Medtner’s music in the 1970s long before Medtner’s music is recognised as it is today.

On St. Patrick’s Day in 1972 Bell performs on the radio the music of Turlough O’Carolan, an 18th-century blind Irish harpist. At that time O’Carolan’s music is virtually unknown, though today almost every album of harp music contains one of his compositions. Working with him on the project are several members of The Chieftains. Bell becomes friends with the leader of The Chieftains, Paddy Moloney. For two precarious years, he records both with the BBC Northern Ireland Orchestra and with The Chieftains, until finally becoming a full-time member of the Chieftains in 1975.

Bell is the only member of the band to wear a necktie at every public performance. He favours socks with novelty designs, such as images of Looney Tunes characters. He wears scruffy suits, often with trousers that are too short. He is eccentric and tells obscene jokes. The title of his 1981 solo album Derek Bell Plays With Himself has a conscious double entendre.

While touring in Moscow he grabs his alarm clock and puts it in his pocket while rushing to catch a plane. He is then stopped by the Soviet police on suspicion of carrying a concealed weapon. Paddy Moloney affectionately calls him “Ding Dong” Bell. He relishes the eclectic collaborations, such as those with Van Morrison, Sting and the Chinese orchestra. In 1991 he records with his old friend James Galway. He is awarded an MBE in the 2000 Queen’s Birthday Honours for services to traditional music.

Bell dies of cardiac arrest in Phoenix, Arizona on October 17, 2002, just four days shy of his 67th birthday. He is remembered at Cambridge House Grammar School, Ballymena, as House Patron of Bell House. 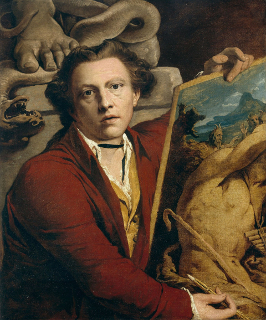 James Barry, Irish painter best remembered for his six-part series of paintings entitled The Progress of Human Culture in the Great Room of the Royal Society of Arts in London, is born in Water Lane (now Seminary Road) on the northside of Cork, County Cork on October 11, 1741.

Barry first studies painting under local artist John Butts. At the schools in Cork to which he is sent he is regarded as a child prodigy. About the age of seventeen he first attempts oil painting, and between that and the age of twenty-two, when he first goes to Dublin, he produces several large paintings.

The painting that first brings him into public notice, and gains him the acquaintance and patronage of Edmund Burke, is founded on an old tradition of the landing of Saint Patrick on the sea-coast of Cashel, although Cashel is an inland town far from the sea, and of the conversion and Baptism of the King of Cashel. It is exhibited in London in 1762 or 1763 and rediscovered in the 1980s in unexhibitable condition.

In late 1765 Barry goes to Paris, then to Rome, where he remains upwards of three years, from Rome to Florence and Bologna, and thence home through Venice. He paints two pictures while abroad, an Adam and Eve and a Philoctetes.

Soon after his return to England in 1771 Barry produces his painting of Venus, which is compared to the Triumph of Galatea of Raphael, the Venus of Urbino of Titian and the Venus de’ Medici. In 1773 he exhibits his Jupiter and Juno on Mount Ida. His Death of General Wolfe, in which the British and French soldiers are represented in very primitive costumes, is considered as a falling-off from his great style of art.

In 1773 Barry publishes An Inquiry into the real and imaginary Obstructions to the Acquisition of the Arts in England, vindicating the capacity of the English for the fine arts and tracing their slow progress to the Reformation, to political and civil dissensions, and lastly to the general direction of the public mind to mechanics, manufactures and commerce.

In 1774 a proposal is made through Valentine Green to several artists to ornament the Great Room of the Society for the encouragement of Arts, Manufactures and Commerce (now the Royal Society of Arts), in London’s Adelphi Theatre, with historical and allegorical paintings. This proposal is rejected at the time. In 1777 Barry makes an offer, which is accepted, to paint the whole on condition that he is allowed the choice of his subjects, and that he is paid by the society the costs of canvas, paints and models. He finishes the series of paintings after seven years to the satisfaction of the members of the society. He regularly returns to the series for more than a decade, making changes and inserting new features. The series of six paintings, The progress of human knowledge and culture, has been described by critic Andrew Graham-Dixon as “Britain’s late, great answer to the Sistine Chapel.”

Soon after his return from the continent Barry is chosen a member of the Royal Academy of Arts. In 1782 he is appointed professor of painting in the room of Edward Penny with a salary of £30 a year. In 1799 he is expelled from the Academy soon after the appearance of his Letter to the Society of Dilettanti, an eccentric publication, full of enthusiasm for his art and at the same time of contempt for the living professors of it. He remains the only academician ever to be expelled by the Academy until Brendan Neiland in July 2004.

After the loss of his salary, a subscription is set on foot by the Earl of Buchan to relieve Barry from his difficulties, and to settle him in a larger house to finish his painting of Pandora. The subscription amounts to £1000, with which an annuity is bought, but on February 6, 1806 he is seized with illness and dies on February 22. His remains are interred in St. Paul’s Cathedral, London on March 4, 1806.