John Fitzgerald Kennedy is inaugurated as the 35th President of the United States on Friday, January 20, 1961 at the eastern portico of the United States Capitol in Washington, D.C., becoming the first Irish Catholic to be elected to the office. The inauguration marks the commencement of Kennedy’s only term as President and of Lyndon B. Johnson‘s only term as Vice President. Kennedy is assassinated 2 years, 306 days into this term, and Johnson succeeds to the presidency.

Kennedy takes office following the November 1960 presidential election, in which he narrowly defeats Richard Nixon, the then–incumbent Vice President. In addition to being the first Catholic to become President, he also becomes the youngest person elected to the office.

His inaugural address encompasses the major themes of his campaign and defines his presidency during a time of economic prosperity, emerging social changes, and diplomatic challenges. This inauguration is the first in which a poet, Robert Frost, participates in the program. Frost, then 86 years old, recites his poem “The Gift Outright” at Kennedy’s request as an act of gratitude towards Frost for his help during the campaign.

The oath of office for the President is administered to Kennedy by Chief Justice of the United States Earl Warren using a closed family Bible at 12:51 (ET) although he officially became president at the stroke of noon as defined by the 20th Amendment to the United States Constitution. He does not wear an overcoat when taking the oath of office and delivering the inaugural address, despite the cold conditions of 22 °F (−6 °C) with windchill at 7 °F (−14 °C) at noon.

Kennedy’s 1366-word inaugural address, the first delivered to a televised audience in color, is considered among the best presidential inaugural speeches in American history. It includes the iconic line “And so, my fellow Americans: ask not what your country can do for you—ask what you can do for your country.”

Presidential inaugurations are organized by the Joint Committee on Inaugural Ceremonies. For Kennedy’s inauguration, this committee is chaired by Senator John Sparkman, and includes Senators Carl Hayden and Styles Bridges, and Representatives Sam Rayburn, John W. McCormack, and Charles A. Halleck.

William Joseph Brennan, Jr., American judge, is named an Associate Justice of the Supreme Court of the United States through a recess appointment by President Dwight D. Eisenhower on October 15, 1956, shortly before the 1956 presidential election. He serves from 1956 until July 20, 1990. As the seventh longest-serving justice in Supreme Court history, he is known for being a leader of the Court’s liberal wing.

Brennan enters private practice in New Jersey and serves in the United States Army during World War II. He is appointed to the Supreme Court of New Jersey in 1951. After his appointment to the U.S. Supreme Court by Eisenhower in 1956, he wins Senate confirmation the following year.

On the Supreme Court, Brennan is known for his outspoken progressive views, including opposition to the death penalty and support for abortion rights. He authors several landmark case opinions, including Baker v. Carr, establishing the “one person, one vote” principle, and New York Times Co. v. Sullivan, which requires “actual malice” in libel suits brought by public officials. Due to his ability to shape a wide variety of opinions and “bargain” for votes in many cases, he is considered to be among the Court’s most influential members. Justice Antonin Scalia calls Brennan “probably the most influential Justice of the [20th] century.”

Brennan holds the post on the Court until his retirement on July 20, 1990 after suffering a stroke. He is succeeded by Justice David Souter. Brennan then teaches at Georgetown University Law Center until 1994. He dies in Arlington County, Virginia on July 24, 1997 and is buried in Arlington National Cemetery.

With 1,360 opinions, he is second only to William O. Douglas in number of opinions written while a Supreme Court justice. On November 30, 1993, President Bill Clinton presents Brennan with the Presidential Medal of Freedom. 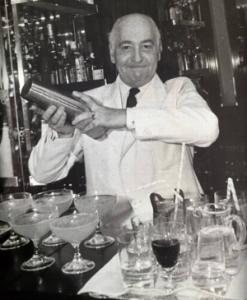 Joe Gilmore, one of the longest running Head Barmen at the Savoy Hotel‘s American Bar, is born in Belfast on May 19, 1922.

The Gilmores own a popular tobacconist shop at the top of the Limestone Road, which remains in business through the Troubles until the mid-1990s. But Gilmore has plans to go places so, at the age of sixteen, he sets out with a friend for London.

His first job is packing rolls of wallpaper at a Sanderson’s factory before moving to a Lyons Corner House as a dish washer with the prospect of getting some decent dinners. He begins training as a barman at London’s La Coquille and The Olde Bell at Hurley, where a chance encounter serving a stylish couple sets the scene for the remarkable life that follows.

At the age of eighteen, Gilmore starts as a trainee barman at The American Bar in 1940 and is appointed Head Barman in 1955, a position he holds until he retires in 1976. Over his years as Head Barman, Gilmore invents numerous cocktails to mark special events and important guests, a longstanding tradition at the American Bar.

Gilmore has invented cocktails in honor of a number of royalty, politicians, and celebrities including the Prince of Wales, Prince William, Princess Anne, Queen Elizabeth The Queen Mother, Prince Andrew, Sir Winston Churchill, and American Presidents Harry S. Truman and Richard Nixon. He also invents cocktails to commemorate the first walk on the moon in 1969 by Neil Armstrong, and the American and Russian link-up in space in 1975.

Gilmore never forgets his Irish roots or family, and never loses his soft Belfast accent. Joe Gilmore dies at the age of 93 on December 18, 2015. His funeral is arranged by A. France & Son, undertakers to Admiral Nelson and near-neighbours in Lamb Conduit Street for more than 50 years. The Savoy sends their senior management and bar staff in their smart white uniforms.