John Fitzgerald Kennedy is inaugurated as the 35th President of the United States on Friday, January 20, 1961 at the eastern portico of the United States Capitol in Washington, D.C., becoming the first Irish Catholic to be elected to the office. The inauguration marks the commencement of Kennedy’s only term as President and of Lyndon B. Johnson‘s only term as Vice President. Kennedy is assassinated 2 years, 306 days into this term, and Johnson succeeds to the presidency.

Kennedy takes office following the November 1960 presidential election, in which he narrowly defeats Richard Nixon, the then–incumbent Vice President. In addition to being the first Catholic to become President, he also becomes the youngest person elected to the office.

His inaugural address encompasses the major themes of his campaign and defines his presidency during a time of economic prosperity, emerging social changes, and diplomatic challenges. This inauguration is the first in which a poet, Robert Frost, participates in the program. Frost, then 86 years old, recites his poem “The Gift Outright” at Kennedy’s request as an act of gratitude towards Frost for his help during the campaign.

The oath of office for the President is administered to Kennedy by Chief Justice of the United States Earl Warren using a closed family Bible at 12:51 (ET) although he officially became president at the stroke of noon as defined by the 20th Amendment to the United States Constitution. He does not wear an overcoat when taking the oath of office and delivering the inaugural address, despite the cold conditions of 22 °F (−6 °C) with windchill at 7 °F (−14 °C) at noon.

Kennedy’s 1366-word inaugural address, the first delivered to a televised audience in color, is considered among the best presidential inaugural speeches in American history. It includes the iconic line “And so, my fellow Americans: ask not what your country can do for you—ask what you can do for your country.”

Presidential inaugurations are organized by the Joint Committee on Inaugural Ceremonies. For Kennedy’s inauguration, this committee is chaired by Senator John Sparkman, and includes Senators Carl Hayden and Styles Bridges, and Representatives Sam Rayburn, John W. McCormack, and Charles A. Halleck.

The protesters chant and wave banners bearing the slogan “The Milosevic of Manhattan” prior to the arrival of the 56th U.S. Secretary of State, who was in office during the controversial administration of Richard Nixon. Kissinger says he is pleased to discover that even in Ireland people are not indifferent to him. However, he denies being a war criminal claiming it is an insult to human intelligence for protesters in Cork to compare him with Slobodan Milošević.

“These people are throwing around allegedly criminal charges without a shred of real evidence. I don’t know who they represent but I wish their knowledge equalled their passion.”

Kissinger, who is visiting the university to deliver a speech at an MBA Association of Ireland business conference, says he has never replied to derogatory remarks in the media. He adds, “I consider them (the accusations) fundamentally beneath contempt. They are based on distortions and misrepresentations.”

The focus of Kissinger’s address is on United States foreign policy particularly in aftermath of the September 11, 2001 terrorist attacks.

Kissinger says the international scene is experiencing an extraordinary period of change for which there is no historical precedent. One of the biggest challenges facing the U.S. administration, he says, is to bring countries together to prevent the spread of biological and chemical weapons.

Kissinger’s visit is condemned by human rights organisations who claim he flouted international law in his dealings with Bangladesh, Chile and East Timor. Cork Sinn Féin councillor Jonathan O’Brien tells an earlier council meeting that Kissinger is not welcome in the city, and calls on UCC to cancel his invitation.

Michael Collins, Irish American former astronaut and test pilot who is part of the Gemini 10 and Apollo 11 missions, is born in Rome, Italy, on October 31, 1930. The Apollo 11 mission includes the first lunar landing in history. His Irish roots can be traced to the town of Dunmanway in County Cork, from which his grandfather, Jeremiah Collins, emigrates in the 1860s.

Collins is born in Rome where his father, United States Army Major General James Lawton Collins, is stationed at the time. After the United States enters World War II, the family moves to Washington, D.C., where Collins attends St. Albans School. During this time, he applies and is accepted to the United States Military Academy in West Point, New York, and decides to follow his father, two uncles, brother and cousin into the armed services.

In 1952, Collins graduates from West Point with a Bachelor of Science degree. He joins the United States Air Force that same year, and completes flight training at Columbus Air Force Base in Mississippi. His performance earns him a position on the advanced day fighter training team at Nellis Air Force Base, flying the F-86 Sabres. This is followed by an assignment to the 21st Fighter-Bomber Wing at the George Air Force Base, where he learns how to deliver nuclear weapons. He also serves as an experimental flight test officer at Edwards Air Force Base in California, testing jet fighters.

Collins makes the decision to become an astronaut after watching John Glenn‘s Mercury-Atlas 6 flight. He applies for the second group of astronauts that same year, but is not accepted. Disappointed, but undaunted, Collins enters the USAF Aerospace Research Pilot School as the Air Force begins to research space. That year, NASA once again calls for astronaut applications, and Collins is more prepared than ever. In 1963 he is chosen by NASA to be part of the third group of astronauts.

Collins makes two spaceflights. The first, on July 18, 1966, is the Gemini 10 mission, where Collins performs a spacewalk. The second is the Apollo 11 mission on July 20, 1969, the first lunar landing in history. Collins, accompanied by Neil Armstrong and Edwin “Buzz” Aldrin, remains in the Command Module while his partners walk on the moon’s surface. Collins continues circling the moon until July 21, when Armstrong and Aldrin rejoin him. The next day, he and his fellow astronauts leave lunar orbit. They land in the Pacific Ocean on July 24. Collins, Armstrong and Aldrin are all awarded the Presidential Medal of Freedom by Richard Nixon. However, Aldrin and Armstrong end up receiving a majority of the public credit for the historic event, although Collins is also on the flight.

Collins leaves NASA in January 1970, and one year later, he joins the administrative staff of the Smithsonian Institution in Washington, D.C. In 1980, he enters the private sector, working as an aerospace consultant. In his spare time, Collins says he stays active, and spends his days “worrying about the stock market” and “searching for a really good bottle of cabernet under ten dollars.”

Collins and his wife, Patricia Finnegan, have three children. The couple lived in both Marco Island, Florida, and Avon, North Carolina until her death in April 2014. 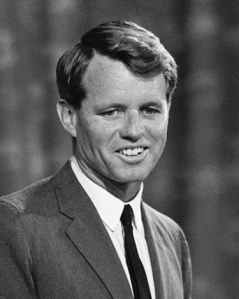 Senator, Democratic presidential candidate, and brother of assassinated President John F. Kennedy, dies on June 6, 1968 in Los Angeles, California after being shot in the early morning hours of June 5.

After winning the California and South Dakota primary elections for the Democratic nomination for President of the United States and speaking to supporters in a ballroom at the Ambassador Hotel, Kennedy walks through the kitchen area frequently shaking hands with those he encounters. Kennedy starts down a passageway narrowed by an ice machine against the right wall and a steam table to the left. He turns to his left and shakes hands with busboy Juan Romero just as Sirhan Sirhan, a 24-year-old Palestinian/Jordanian immigrant, steps down from a low tray-stacker beside the ice machine and repeatedly fires what is later identified as a .22 caliber Iver-Johnson Cadet revolver.

After Kennedy had falls to the floor, former FBI agent William Barry sees Sirhan holding a gun and hits him twice in the face while others force Sirhan against the steam table and disarmed him as he continues firing his gun in random directions. Five other people are also wounded.

Kennedy is transferred several blocks to Good Samaritan Hospital for surgery. Surgery begins at 3:12 AM PDT and lasts three hours and 40 minutes. Despite extensive neurosurgery to remove bullet and bone fragments from his brain, his condition remains extremely critical until he dies at 1:44 AM PDT on June 6, nearly 26 hours after the shooting.

Sirhan pleads guilty on April 17, 1969, and is sentenced to death. The sentence is commuted to life in prison in 1972 after the California Supreme Court, in its decision in California v. Anderson, invalidates all pending death sentences imposed in California prior to 1972. Since that time, Sirhan has been denied parole fifteen times and is currently confined at the Richard J. Donovan Correctional Facility in southern San Diego County.

Kennedy’s body lay in repose at St. Patrick’s Cathedral in New York City for two days before a funeral Mass is held on June 8. His body is interred near his brother at Arlington National Cemetery in Washington, D.C. His death prompts the protection of presidential candidates by the United States Secret Service. Hubert Humphrey later goes on to win the Democratic nomination for the presidency, but ultimately loses the election to Republican Richard Nixon.

As with his brother’s death, Kennedy’s assassination and the circumstances surrounding it have spawned a variety of conspiracy theories. Kennedy remains one of only two sitting United States Senators to be assassinated, the other being Huey Long.

Joe Gilmore, one of the longest running Head Barmen at the Savoy Hotel‘s American Bar, is born in Belfast on May 19, 1922.

The Gilmores own a popular tobacconist shop at the top of the Limestone Road, which remains in business through the Troubles until the mid-1990s. But Gilmore has plans to go places so, at the age of sixteen, he sets out with a friend for London.

His first job is packing rolls of wallpaper at a Sanderson’s factory before moving to a Lyons Corner House as a dish washer with the prospect of getting some decent dinners. He begins training as a barman at London’s La Coquille and The Olde Bell at Hurley, where a chance encounter serving a stylish couple sets the scene for the remarkable life that follows.

At the age of eighteen, Gilmore starts as a trainee barman at The American Bar in 1940 and is appointed Head Barman in 1955, a position he holds until he retires in 1976. Over his years as Head Barman, Gilmore invents numerous cocktails to mark special events and important guests, a longstanding tradition at the American Bar.

Gilmore has invented cocktails in honor of a number of royalty, politicians, and celebrities including the Prince of Wales, Prince William, Princess Anne, Queen Elizabeth The Queen Mother, Prince Andrew, Sir Winston Churchill, and American Presidents Harry S. Truman and Richard Nixon. He also invents cocktails to commemorate the first walk on the moon in 1969 by Neil Armstrong, and the American and Russian link-up in space in 1975.

Gilmore never forgets his Irish roots or family, and never loses his soft Belfast accent. Joe Gilmore dies at the age of 93 on December 18, 2015. His funeral is arranged by A. France & Son, undertakers to Admiral Nelson and near-neighbours in Lamb Conduit Street for more than 50 years. The Savoy sends their senior management and bar staff in their smart white uniforms.