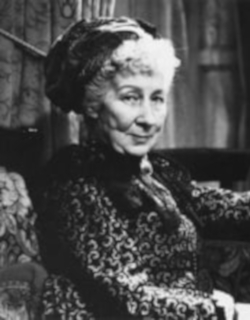 Marie Kean, actress of stage and screen whose career spanned over 40 years, is born in the village of Rush, County Dublin on June 27, 1918. The Stage calls her one of Ireland’s most impressive actresses, and “an artist of considerable emotional depth and theatrical command.”

Kean grows up in Rush and is educated at Loreto College, North Great George’s Street, Dublin. She learns her craft at the Gaiety School of Acting and is part of the Abbey Theatre company until 1961.

Kean’s leading role as the kindly matriarch, Mrs. Kennedy, in the RTÉ Radio serial drama, The Kennedys of Castleross, makes her famous throughout Ireland. She stars in the programme for the duration of its 18-year run.

In 1968, Kean wins a Jacob’s Award for her performance as Winnie in RTÉ television’s production of Samuel Beckett‘s play Happy Days, a role she had previously performed on stage and which she describes later as her favourite part. Among her other television roles is that of Mrs. Conn Brickley, Bridget’s mother, in an episode of The Irish R.M. called “The Boat’s Share.”

Kean’s many stage appearances include performances in the plays of John Millington Synge, Seán O’Casey and Brian Friel. She takes the lead role of Maggie Polpin in the 1969 world première of John B. Keane‘s play Big Maggie at the Cork Opera House. In 1978 she wins the State of New York best actress award for her performance in what has become Keane’s most successful play.

Arguably her most memorable film role is as Barry’s scheming mother in Stanley Kubrick‘s Barry Lyndon. She also plays a bigoted Irish shopkeeper in David Lean‘s Ryan’s Daughter. Her final movie appearance is in John Huston‘s The Dead (1987), in which she plays the part of Mrs. Malins.

Linehan has appeared in many comedy revues written by her husband Fergus. She has appeared onstage in, among other plays, Blithe Spirit, House of Bernarda Alba and Twelfth Night. She is nominated for Best Featured Actress in a Play for her role as Kate in Brian Friel‘s Dancing at Lughnasa at the 1992 Tony Awards. She stars as Winnie in Samuel Beckett‘s Happy Days on stage and on screen as part of the Beckett on Film project, having already played the role in a 1996 production at the Gate Theatre opposite Barry McGovern.

In 1972, Linehan wins a Jacob’s Award for her RTÉ Radio comedy series Get an Earful of This. She is the recipient of the Lifetime Achievement Award at the Irish Theatre Awards in 2008.

In film, Linehan appears as Nurse Callan in Ulysses, May Dedalus in A Portrait of the Artist as a Young Man (1977), Aunt Fitzeustace in Fools of Fortune, Mrs. Canning in The Butcher Boy, Peggy Owens in About Adam, Mrs. Matson in The Hi-Lo Country and Millie O’Dowd in The Matchmaker. In television, she is a voice artist on the Irish language children’s TV series Inis Cúil in 2005, and appears in Hugh Leonard‘s BBC sitcom Me Mammy. More recently, she plays Deirdre O Kane’s mother in Bitter Sweet.

Linehan and her husband live in Dublin and have four children and eight grandchildren. Her father Daniel McMenamin was a Teachta Dála for Donegal from 1927 to 1961. 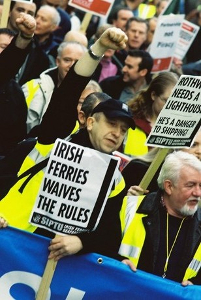 Nearly 150,000 people take to the streets on December 9, 2005, as the Irish Ferries protest mushrooms into the largest public demonstration the country has seen for two decades.

The national day of protest is called by the Irish Congress of Trade Unions, which is demanding Government action to combat exploitation of migrant workers and the displacement of jobs. There are rallies in Dublin, Cork, Waterford, Limerick, Galway, Sligo, Athlone and Rosslare.

An Garda Síochána estimate that 40,000 people take part in the march in Dublin, although organisers claim the figure is far higher. Gerry Adams of Sinn Féin, Pat Rabbitte of the Labour Party and John Gormley of the Green Party participate in the march in the capital. Staff on board the MS Isle of Inismore in Pembroke and the four engineers holed up in the ships control room say they are overwhelmed by the level of support shown by marchers in the rallies.

Bus and rail services are disrupted during the protest but return to normal for evening rush hour.

The Irish Small & Medium Enterprises Association (ISME) strongly criticises the National Day of Protest. In a statement, ISME Chief Executive Mark Fielding says the protest is undermining the industrial relations process in this country and has very little to do with the Irish Ferries dispute and is in fact an attempt by the unions to influence negotiations in advance of any new national pay agreement.

Director General of the Irish Business and Employers Confederation (IBEC) Turlough O’Sullivan says there is nothing to be gained from disrupting business and the general public. He adds that whatever one’s views on the Irish Ferries dispute, nothing can justify calling a national work stoppage when discussions are already underway in a bid to resolve the row.

Alice Taylor, best-selling Irish writer and novelist particularly known for her nostalgia works looking back at life in a small village, is born on February 28 , 1938, on a farm in Lisdangan, Newmarket in northern County Cork.

Taylor is educated at Drishane Convent. She works in Bandon before marrying Gabriel Murphy. They have four sons and one daughter. When she marries she moves to Innishannon in the southern part of the county in 1961. There she runs a guesthouse, the local post office, and a shop.

In 1984 she edits and publishes a local magazine, Candlelight, and in 1986 she publishes an illustrated collection of her poetry. However it is the launch of her book To School Through the Fields, published in May 1988, which brings her fame. She has numerous interviews on national shows including RTÉ Radio‘s Gay Byrne Show and The Late Late Show. The next books are equally successful and have been sold internationally. Since then she has moved on to novels which have also become best sellers.

Her husband dies in 2005. Taylor remains very connected to the village of Innishannon where she continues to live. Since her eldest son has taken over responsibility for the shop, she has been able to devote more time to her writing. One of the programs she has been involved in is the restoration of the old Innishannon Tower.

President Mary McAleese goes on RTÉ Radio on September 11, 2001, to express her shock and horror at the terrorist attacks in the United States.

The President says that these atrocities are “crimes against the very foundations of our humanity.” She comments that “it is unbearable and almost unbelievable for the rest of the world to be witnessing such wanton destruction of human life in front of our eyes.”

President McAleese speaks by telephone with the United States Ambassador to Ireland, Richard Egan, and asks him to convey to President George W. Bush the heartfelt sympathies of the Irish people in this hour of great tragedy for the people of America, a nation which Ireland holds so dear.

The Irish government names more than a dozen of its natives among the dead in New York City, Washington, D.C., and Pennsylvania. Based on family names and individual stories, there are many hundreds of American dead with Irish heritage, including Americans who through parents or grandparents have become Irish citizens.

The website www.IrishTribute.com, set up in reaction to the September 11 attacks, estimates that perhaps one-sixth of the dead are in some way “Irish.” The website claims that “September 11, 2001 may well go down as the bloodiest day in the history of the Irish people. An estimated 1,000 people who were of Irish descent or of Irish birth were lost in the violent events on that day.”

A National Day of Mourning is held in Ireland on September 14 and a remembrance mass is held on September 12, 2001. Ireland is one of the few countries to hold a service day. Taoiseach Bertie Ahern and President McAleese are both in attendance.

Families in Limerick take in American tourists grounded at Shannon Airport after all flights into and out of the United States are cancelled.

The only flag, other than the U.S. flag, to fly at the Ground Zero site is the Irish tricolour, which is put in place by the Carpenters Union #608 and FDNY Command Post.

In the wake of the attacks, the Irish government immediately begins reviewing security arrangements.