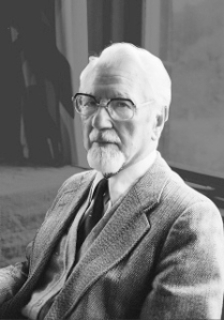 Poet John Harold Hewitt is born in Belfast on October 28, 1907. He is the most significant Belfast poet to emerge prior to the 1960s generation of Northern Irish poets that includes Seamus Heaney, Derek Mahon and Michael Longley.

After attending Agnes Street National School, Hewitt attends the Royal Belfast Academical Institution from 1919 to 1920 before moving to Methodist College Belfast, where he is a keen cricketer. In 1924, he starts an English degree at Queen’s University Belfast, obtaining a BA in 1930, which he follows by obtaining a teaching qualification from Stranmillis College, Belfast.

From November 1930 to 1957, Hewitt holds positions in the Belfast Museum & Art Gallery. His radical socialist ideals prove unacceptable to the Belfast Unionist establishment and he is passed over for promotion in 1953. Instead in 1957 he moves to Coventry, a city still rebuilding following its devastation during World War II. He is appointed Director of the Herbert Art Gallery & Museum where he works until retirement in 1972.

Hewitt has an active political life, describing himself as “a man of the left,” and is involved in the British Labour Party, the Fabian Society and the Belfast Peace League. He is attracted to the Ulster dissenting tradition and is drawn to a concept of regional identity within the island of Ireland, describing his identity as Ulster, Irish, British and European. He officially opens the Belfast Unemployed Resource Centre (BURC) Offices on May Day 1985.

John Hewitt dies in Belfast on June 22, 1987. His life and work are celebrated in two prominent ways – the annual John Hewitt International Summer School and, less conventionally, the John Hewitt Bar and Restaurant, a Belfast pub is named after him. The bar is named after him as he officially opens the Belfast Unemployed Resource Centre, which owns the establishment. It is a popular meeting place for local writers, musicians, journalists, students and artists. Both the Belfast Festival at Queen’s and the Belfast Film Festival use the venue to stage events.