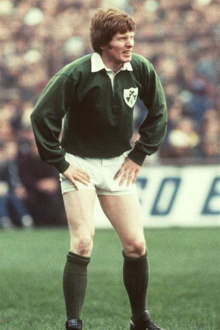 Seamus Oliver “Ollie” Campbell, former rugby union player, is born in Dublin on March 5, 1954. He plays fly-half for the Ireland national rugby union team from 1976 to 1984. He is most well known for his role in orchestrating Ireland’s Triple Crown victory at the 1982 Five Nations Championship, breaking a drought of over 30 years. He has been described as Ireland’s most complete fly-half since Jack Kyle.

Campbell is educated at Belvedere College, a famous Irish rugby school in Dublin, where he is on the teams that win the Leinster Schools Rugby Senior Cup twice in a row in 1971 and 1972. He plays for Old Belvedere R.F.C. at club level and represents Leinster at provincial level, although prior to the professional era. While playing for Old Belvedere, he travels to the United States in 1978, where he plays in New York City against the Old Maroon Rugby Club.

Campbell wins a total of 22 caps for Ireland from 1976–1984, scoring 217 test points. His international career is more brief than this span suggests, however, as he plays only four full seasons for Ireland from 1980–1984. Of his career totals, he wins 22 caps and scores 182 points in the Five Nations tournament. He tours twice with Ireland, to Australia in 1979 and to South Africa in 1981.

The defining moment in Campbell’s career comes in 1982, with Campbell as the architect-in-chief of Ireland’s 1982 Triple Crown victory, Ireland’s first since 1949. Ireland enters the tournament winless in its past eight matches. Campbell starts the 1982 Five Nations by scoring eight points in Ireland’s 20–12 win against Wales, and also playing a major hand in all three of Ireland’s tries. He then scores another eight points in the following match, a 16–15 win against England. In Ireland’s third match, he kicks all of Ireland’s 21 points, including a career best 6 penalties, against Scotland at Lansdowne Road to secure the Triple Crown. He is the leading scorer in the 1982 Five Nations with 46 points.

Campbell retires from rugby in 1986 following two years of struggles with hamstring injuries. In 2007 he is presented with the Newbridge RFC Legend in Rugby Award along with the Irish Rugby Squad which won the 1982 Triple Crown and elected an Honorary Life Member of Newbridge RFC. He has worked in the family clothing business since retirement from rugby in 1984.

Old Belvedere’s sportsground on Anglesea Road in Dublin is renamed Ollie Campbell Park in his honour in 2019. 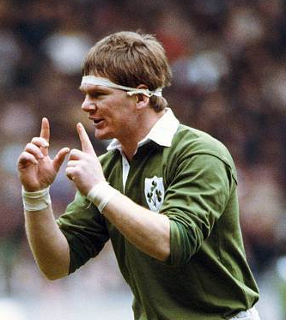 Ciaran Fitzgerald, Irish former rugby union player, is born on June 4, 1952 in Loughrea, County Galway. He captains Ireland to the Triple Crown in 1982 and 1985, and the Five Nations Championship in 1983. He also captains the British and Irish Lions on their 1983 tour. After the conclusion of his playing career, he serves as coach of the national team.

Though most widely remembered for playing rugby union, Fitzgerald is an accomplished sportsman, winning two All-Ireland boxing championships. He also plays minor hurling for Galway GAA with his team reaching the minor final against Cork GAA in 1970.

Playing in the amateur era, Fitzgerald also maintains a career in the Irish Army. He also serves as the aide-de-camp to President Patrick Hillery during his career.

Fitzgerald rises to prominence in the game of rugby, making his test debut for Ireland against Australia on June 3, 1979, during an Irish tour of Australia. His last test comes against Scotland on March 15, 1986 in the 1986 Five Nations Championship. In total, Fitzgerald receives 22 competitive and three friendly caps for Ireland. He scores once, a try against Wales, in the 1980 Five Nations Championship. He also captains the British and Irish Lions team on their 1983 tour, when the team travels to New Zealand and is beaten in each test against the All Blacks.

Following his retirement from playing, Fitzgerald continues to be involved in the game. He serves as head coach of Ireland from 1990 to 1992, leading the team to the 1991 Rugby World Cup, where they reach the quarterfinals. He also had a career in media, appearing on Setanta Sports and RTÉ, the Irish national TV and radio service, as a rugby pundit. 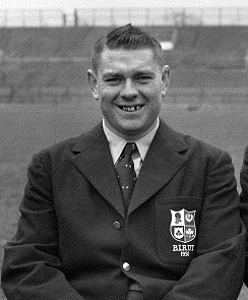 Tom Clifford, Irish rugby union player who plays in the prop position, is born in Phippsboro, County Tipperary, on November 15, 1923. Clifford plays club rugby with Young Munster, represents the Munster Rugby provincial team, is capped fourteen times for Ireland, and is a member of the British and Irish Lions team that tours in 1950.

When Clifford is three years old, his family moves to Limerick. He attends CBS Sexton Street secondary school, where he participates in the school hurling team.

Clifford is named in the squad for the 1950 British Lions tour to New Zealand and Australia, the first post-war tour by a British Isles combined team and the first where the team is officially called British Lions. The touring party travels by boat, departing in April and not returning until October. Out of the 29 games played during the tour, Clifford is featured in twenty of them, including all five test matches – three against New Zealand and two against Australia. On his return to Limerick, a crowd of around 8,000 people turn out at Limerick railway station to greet him.

Clifford retires from playing rugby in 1957. He dies in Phippsboro on October 1, 1990, at the age of 66. Young Munster’s home group, Tom Clifford Park, is named after him. 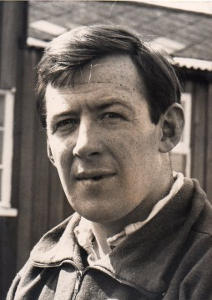 Doyle begins playing rugby union at Newbridge College, County Kildare. He goes on to study veterinary science at University College Dublin, who he also represents at rugby. He makes his Ireland debut against France on January 23, 1965, scoring a try in the game. While representing Ireland he also studies at the University of Cambridge where he gains a Blue in the 1965 Varsity match against the Oxford University RFC. Doyle also studies at the University of Edinburgh and plays club rugby for Edinburgh Wanderers before returning to Ireland.

Doyle goes on to earn the distinction of never being dropped during his 20-cap international career as a flanker. Doyler, as he is affectionately known, scores the winning try against Wales in the 1967 Five Nations Championship, tours Australia with Ireland in 1967 and South Africa with the British and Irish Lions the following year.

His last game for Ireland is against Australia in October 1968, when he lines out alongside his brother Tommy. He coaches Leinster to Interprovincial Championship success five times between 1979 and 1983 before he succeeds Willie John McBride as Ireland coach during the 1984–85 season. Under In 1985, under Doyle’s stewardship, Ireland wins the Triple Crown and Five Nations Championship.

Doyle leads Ireland to the inaugural 1987 Rugby World Cup, but that joy is tinged with sadness as he suffers a heart attack at the opening dinner. He battles illness and adversity and his recovery from a brain problem is chronicled in his book 0.16.

In latter years, apart from working in his veterinary practice, Doyle is a regular contributor to rugby matters on RTÉ Radio One.

Mick Doyle is killed in an automobile accident in Dungannon, County Tyrone, on May 11, 2004.