During the Irish Civil War, the Irish Republican Army (IRA) under Michael Kilroy take Ballina, County Mayo, in a surprise attack on September 12, 1922 while the National Army troops there are at a Mass service for a comrade killed in the fighting.

In Mayo, Republicans organise themselves into Flying Columns of thirty-five men. The Columns are usually named after their Commanders such as Dr. John Madden in the West, Frank Carty in the Ox Mountains or Tom Carney in East Mayo. Each Column contains an explosives specialist, machine gunners, signalers, first aiders and riflemen. The field of operations is considerably wide. This causes considerable confusion among National Army Garrisons in the main towns of County Mayo. When they eventually reach the sites of ambushes, railways blown up or outposts attacked, the Republican Columns are long gone.

The Republicans also undertake large-scale operations such as “The Storming of Ballina” which occurs on Tuesday, September 12, 1922. The Republicans attack while the majority of the National Army Garrison is at a funeral Mass. Using a captured armoured car the Republicans fight their way through the town clearing key buildings as they go. A large mine is detonated at the town post office with the resulting shockwave throwing people through the air and shattering windows in the nearby streets. The Republicans celebrate their victory by relieving many of the shops of their goods. The Republicans then divide their forces in two. One Unit under Michael Kilroy heads west out towards Belmullet. The other Unit heads to a Republican HQ and supply dump at Lough Talt.

Brigadier-General Lawlor gathers all available National Army Forces in County Mayo for a counter strike against the Republicans. Two separate National Army Columns set out from Ballina. The first, under Brigadier-General Lawlor pursues the Republicans heading for Lough Talt. The Republicans fight a strong rearguard action through the Ox Mountains as they withdraw from Lough Talt. The fighting, which continues throughout the day, sees Lawlor wounded twice and one of Mayo’s own heroes of the War of Independence, Commandant-General Joe Ring, killed in action.

Meanwhile, Brigadier-General Neary leads a second National Army Column after General Kilroy’s retreating Column across north Mayo. Neary’s men run straight into a classic IRA ambush at Glenamoy. Six National Army troops are killed and many captured along with forty-five to fifty rifles. The National Army troops are in such a disheveled state Kilroy orders them fed and released. It is a valuable insight into the morale of the army facing the Republicans. Uniforms including underwear, boots and food are in short supply. Many have not been paid for weeks.

The Republican operations at Ballina, Lough Talt and Glenamoy boost their morale but leaves the National Army Commanders bitter and out for revenge. This bitterness is soon reflected in combat. National Army troops begin mixing ground glass with the gunpowder in their rifle rounds. In response, the Republicans began using “dum-dum” or expanding bullets.

Christopher Thomas Ewart Ewart-Biggs, British Ambassador to the Republic of Ireland, author and senior Foreign Office liaison officer with MI6, is killed in Sandyford, Dublin on July 21, 1976 by a Provisional Irish Republican Army (IRA) land mine.

Ewart-Biggs is born in the Thanet district of Kent, South East England to Captain Henry Ewart-Biggs of the Royal Engineers and his wife Mollie Brice. He is educated at Wellington College and University College, Oxford and serves in the Queen’s Own Royal West Kent Regiment of the British Army during World War II. At the Second Battle of El Alamein in 1942 he loses his right eye and as a result he wears a smoked-glass monocle over an artificial eye.

Ewart-Biggs joins the Foreign Service in 1949, serving in Lebanon, Qatar and Algiers, as well as Manila, Brussels and Paris.

Ewart-Biggs is 55 when he is killed by a land mine planted by the IRA on July 21, 1976. He had been taking precautions to avoid such an incident since coming to Dublin only two weeks earlier. Among the measures he employs is to vary his route many times a week however, at a vulnerable spot on the road connecting his residence to the main road, there is only a choice between left or right. He chooses right and approximately 150 yards from the residence he hits a land mine that is later judged to contain hundreds of pounds of explosives. Ewart-Biggs and fellow passenger and civil servant Judith Cooke (aged 26) are killed. Driver Brian O’Driscoll and third passenger Brian Cubbon (aged 57) are injured. Cubbon is the highest-ranking civil servant in Northern Ireland at the time.

The Irish government launches a manhunt involving 4,000 Gardaí and 2,000 soldiers. Taoiseach Liam Cosgrave declares that “this atrocity fills all decent Irish people with a sense of shame.” In London, Prime Minister James Callaghan condemns the assassins as a “common enemy whom we must destroy or be destroyed by.” Thirteen suspected members of the IRA are arrested during raids as the British and Irish governments attempt to apprehend the criminals, but no one is ever convicted of the killings. In 2006, released Foreign and Commonwealth Office files reveal that the Gardaí had matched a partial fingerprint at the scene to Martin Taylor, an IRA member suspected of gun running from the United States.

(Pictured: The twisted remains of the car lie upended beside a huge crater after the explosion that killed Christopher Ewart-Biggs and civil servant Judith Cooke) 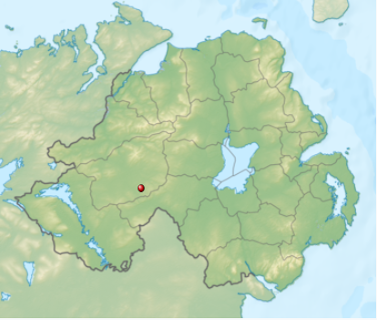 The Ballygawley land mine attack is a bomb attack carried out by the Provisional Irish Republican Army (IRA) on July 13, 1983. The IRA explodes a land mine under an Ulster Defense Regiment‘s (UDR) mobile patrol at Ballygawley Road, near Dungannon, County Tyrone, Northern Ireland. Four UDR soldiers are killed in the incident.

After the 1981 Irish hunger strike, floods of recruits sign up to join the IRA. Republicans in County Tyrone are especially angry over the death of Martin Hurson who was from the small Tyrone village of Cappagh and was one of Cappagh’s most famous sons. Cappagh becomes a Republican stronghold in the 1980s. Many young men flock to join the East Tyrone Brigade to avenge Hurson’s death. Some of those who join after being radicalized by the Hunger Strike go onto become famous IRA Volunteers like Declan Arthurs and Martin McCaughey who were both small children when the conflict broke out in 1969.

Sinn Féin member Francie Molloy said the following on Hurson’s funeral and the effect his death had on the young people of Cappagh:

“There was people everywhere. The village was black with them. It was the first sign in Tyrone of thousands and thousands of people assembling to honor the remains of a native son coming home. Martin was young when he went to jail and young when died on hunger strike. His death just made young people more determined that they were going to replace him. They saw ten men dead as the British government taking people out of the struggle. I think the young people of Cappagh and surrounding areas decided there and then that they were going to replace every one of them and replace them tenfold. And that is what they did. The number of young people who joined up in response was massive.”

On July 13, 1983, four British Army (Ulster Defence Regiment) soldiers (Ronald Alexander, Thomas Harron, John Roxborough, and Oswald Neely), all Protestant members of the 6th Battalion UDR, are travelling in their mobile patrol along a road in Tyrone close to the small town of Ballygawley. IRA Volunteers from the East Tyrone Brigade plant a 500 lb. land mine along the road the UDR patrol is traveling. The IRA unit notices the UDR takes a similar route every so often and has spotted weakness in the patrol. The IRA Volunteers are watching the UDR patrol while being well hidden. Once the UDR patrol is close to the land mine the IRA Volunteers detonate the land mine by remote control killing the four UDR soldiers almost immediately. This is the highest casualty rate suffered by the UDR in a single incident during The Troubles and worst attack suffered by the security forces since 1981. The attack is carried out by an Active Service Unit (ASU) of the IRA’s East Tyrone Brigade which is one of the most active and successful Brigade areas in the IRA during the 1980s.

Within five years the IRA’s East Tyrone Brigade launches two more high-profile attacks in Ballygawley. In 1985, during the Attack on Ballygawley barracks, an IRA unit led by Patrick Joseph Kelly and Jim Lynagh attacks the Ballygawley RUC barracks, shooting dead two RUC officers who are at the front of the station. A 200 lb. bomb destroys the entire barracks and injures three more RUC officers. In 1988, the IRA kills eight British soldiers and injures twenty-eight others during the Ballygawley bus bombing. Many Republicans see this as revenge for the Loughgall ambush the year before when the Special Air Service (SAS) shot dead eight IRA Volunteers. 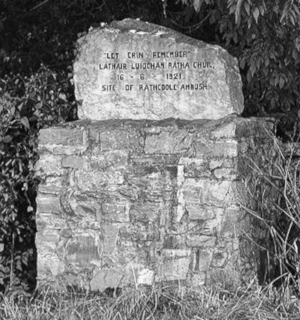 The Rathcoole Ambush, one of the largest ambushes of the Irish War of Independence, takes place at Rathcoole, County Cork on June 16, 1921.

The railway line between Banteer and Millstreet had been cut in several places so the British Auxiliary forces based at Millstreet have to travel to Banteer by road for their supplies twice a week. As a result, a combined force of 130 Irish Republican Army (IRA) volunteers from the Millstreet, Kanturk, Newmarket, Charleville and Mallow battalion columns are mobilised to attack the Auxiliaries as they return from Banteer. The volunteers are under the command of Paddy O’Brien from Liscarroll.

On the night before the ambush the IRA volunteers sleep at Rathcoole Wood, which overlooks the planned ambush position. Shortly after sunrise the following morning, Captain Dan Vaughan lays six land mines on the untarred road and covers them with dust. After a wait of several hours a convoy of four armour-plated lorries, each mounted with a machine gun and carrying ten men, is observed heading for Banteer.

The volunteers prepare themselves and at 6:20 in the evening, as the lorries pass through the ambush area on their return journey, three of the land mines explode with devastating results. One mine detonates as the last of the four lorries drives over it and another explodes under the leading lorry in the convoy. Both vehicles are out of action with the two other lorries trapped between them. A third mine explodes amid a party of Auxiliaries as they attempted to outflank the position. A bitter firefight develops. Each time Auxiliaries attempt to outflank the IRA they are driven back, suffering losses of more than twenty dead and over a dozen wounded.

When it becomes clear that the IRA cannot achieve a complete victory because of their limited ammunition supply, the order for withdrawal is given and the whole force retires without a single casualty. Although no arms are captured during the action, a reconnaissance party from the column returns the next day to search the ambush position and recovers 1,350 rounds of ammunition which the Auxiliaries had left behind them as they removed their dead and wounded.

The ambush at Rathcoole is one of the Irish Republican Army’s most successful actions during the War of Independence. A week after the ambush, British Forces from Kanturk, Buttevant, Ballyvonaire, Macroom, Ballincollig, Killarney and Tralee carry out a widespread search throughout the Rathcoole area. Michael Dineen, a Volunteer in Kilcorney Company is taken from his brother’s house at Ivale by a party of Auxiliaries and shot dead. On the evening of July 1, the Auxiliaries set fire to and destroy the wood at Rathcoole from where the ambush had been launched. That same day that they shoot and kill a local man, Bernard Moynihan, as he is out cutting hay.

(Pictured: Monument at the site of the Rathcoole Ambush)