Joan O’Hara, Irish stage, film and television actress, is born in Rosses Point, County Sligo, on October 10, 1930. She is one of Ireland’s most popular actresses and is, at the time of her death, recognisable to television viewers as Eunice Dunstan, a gossip in Fair City on RTÉ One.

O’Hara is born and raised in Rosses Point, the daughter of Major John Charles O’Hara, an officer in the British Corps of Royal Engineers and his wife, Mai (née Kirwan). One of her sisters, Mary (born 1935), is a soprano/harpist. Her brother Dermot (born 1934) now lives with his family in Canada. She attends the same Ursuline convent school as fellow actress and friend Pauline Flanagan.

O’Hara lives most of her life in Monkstown, County Dublin, with a stay in London, with her husband, the poet and architect Francis J. Barry. The couple has four children: Siubhan, Jane, Guy, and Sebastian, an author/playwright, whose works include The Steward of Christendom, and the Booker-shortlisted novels A Long Long Way and The Secret Scripture. She is also a year-round sea-swimmer.

O’Hara is a member of the renowned Abbey Players and performs in many plays in the Abbey Theatre in Dublin, including those by Seán O’Casey, Lady Gregory and W.B. Yeats. She appears as Maurya in the 1988 film The Dawning. She appears in a number of other films, including Ron Howard‘s Far and Away, Da, Footfalls, Home is the Hero and just before her death, How About You. In this her final film, she stars with Vanessa Redgrave and her friend Brenda Fricker. The strength of her performance and bravery in carrying it out is acknowledged by the cast and crew in a standing ovation.

More recently, O’Hara is best known for appearing in the popular Irish television soap opera Fair City, broadcast on RTÉ One. She joins the soap in 1994, portraying the character Eunice Dunstan until her death in 2007. Thus she is described as both one of Ireland’s most popular actresses and as one of the finest actors of her generation on her death. She admires in particular Samuel Beckett, Federico García Lorca and Ingmar Bergman. While she takes a no-nonsense approach to her craft, famously giving the advice that when in doubt, one should relate to the fireplace, she is educated at the Abbey School of Acting and has a deep appreciation and knowledge of theoretical approaches to acting and is an admirer of the European and American avant-garde. As actor Alan Stanford said after her death, “She had the most amazing energy. She was in the truest sense one of the last of the greats.”

Joan O’Hara Barry (she keeps her maiden name as her stage name) dies in Dublin on July 23, 2007 of complications from heart disease, aged 76. Her death is announced on RTÉ News the following day. 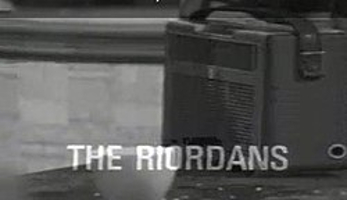 The Riordans, a drama about life in a rural Irish village and the most successful serial in the history of Raidió Teilifís Éireann (RTÉ), running from 1965 to 1979, comes to an end on May 11, 1979. It is the second Irish soap opera made by RTÉ (then called Telefís Éireann).

In 1964 the fledgling Telefís Éireann launches Tolka Row, a soap opera set in a working class part of Dublin. Its success is immediate, with its actors becoming household names. One year later, aware that Ireland is still a largely rural country, and of the immense popularity of rural-based radio shows on RTÉ Radio (then called Radio Éireann), Telefís Éireann decides to create a new rural soap opera, set on a family farm. Located in Dunboyne, The Flathouse, owned by the Connolly family, is the setting for this programme.

The show is called The Riordans after the name of the central family, who are two middle-aged parents, Tom Riordan and his wife Mary Riordan, together with their oldest son, Benjy and other siblings, including brother Michael and sister Jude, all of whom except Benjy have left farming for other careers and have more adventurous personal lives.

The Riordans is set in the fictional townland of Leestown in County Kilkenny and proves to be a revolutionary television programme, both in Ireland and internationally. Its most dramatic innovation is in the use of Outside Broadcast Units (OBUs) to film most of each episode on location in the countryside. This is a marked innovation. Previously soap operas had all been studio-based, with even supposed exterior filming all done with studio sets built in sound stages. This breaks the mould of broadcasting in the soap opera genre and inspires the creation of its British equivalent, Emmerdale Farm (now called Emmerdale) by Yorkshire Television in 1972. In 1975 The Riordans begins to be filmed and transmitted in colour, having been available in monochrome only up to then.

The show undergoes a number of changes in the mid-1970s, most notably moving from a half-hour to one-hour format, as well as a change in theme tune. The decision of actor Tom Hickey to leave the series causes some problems. His character, Benjy is not killed off but goes abroad “on the missions.” While the show has declined somewhat from its heyday, it still regularly battles with The Late Late Show to top the TAM ratings. The production team is surprised when one episode, which unusually departs from the 1970s and focuses on Tom Riordan as a young man in the 1930s at a family céilí, is critically acclaimed by the media and many older viewers, who view it as an accurate representation of life on an Irish farm in the 1930s and 1940s.

With its considerable popularity, large cast of respected actors and high production values, and its central location on the schedules of RTÉ 1, few expect the show to be axed, let alone so suddenly. There is considerable surprise, and a lot of criticism, when the new Director of Programming at RTÉ, Muiris Mac Conghail, decides that the show has run its course and so axes it in May 1979. Part of the justification is cost as it is one of RTÉ’s most expensive shows to produce.