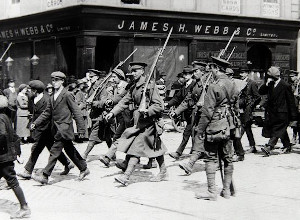 The United Kingdom declares martial law in Ireland for one month on April 25, 1916, the day after the commencement of the Easter Rising. A curfew is imposed from 8:30 PM until 5:00 AM. Anyone spotted on the streets during the hours of darkness are to be shot on sight. The trams stop running at 7:00 PM and the theatres and cinemas close by 8:00 PM. Those rushing for trams leaving the city centre have to pass through a stop-and-search military cordon.

The Easter Rising, also known as the Easter Rebellion, is an armed insurrection in Ireland during Easter Week, 1916. The Rising is mounted by Irish republicans in an attempt to end British rule in Ireland, secede from the United Kingdom of Great Britain and Ireland and establish an independent Irish Republic. This takes place while the United Kingdom is heavily engaged in World War I. It is the most significant uprising in Ireland since the Irish Rebellion of 1798.

Organized by seven members of the Military Council of the Irish Republican Brotherhood (IRB), the Rising begins on Easter Monday, April 24, 1916, and lasts for six days. The following day the British Government immediately declares martial law in Ireland. Members of the Irish Volunteers, led by schoolmaster and Irish language activist Patrick Pearse and joined by the smaller Irish Citizen Army of James Connolly and 200 members of Cumann na mBan, seize key locations in Dublin and proclaim the Irish Republic independent of the United Kingdom. There are actions in other parts of Ireland, however, except for the attack on the Royal Irish Constabulary barracks at Ashbourne in County Meath, they are minor.

With vastly superior numbers and artillery, the British army quickly suppresses the Rising and Pearse agrees to an unconditional surrender on Saturday, April, 29, 1916. Most of the leaders are executed following courts-martial, but the Rising succeeds in bringing physical force republicanism back to the forefront of Irish politics. Support for republicanism continues to rise in Ireland in the context of the ongoing war in Europe and the Middle East and revolutions in other countries, and especially as a result of the Conscription Crisis of 1918 and the failure of the British-sponsored Irish Convention.

In the 1918 Irish general election, republicans, by then represented by Sinn Féin, secure an overwhelming victory, winning 73 Irish seats out of 105 to the British Parliament, on a policy of abstentionism and Irish independence. The following year Éamon de Valera escapes from Lincoln Gaol to become party leader. On January 21, 1919 they convene the First Dáil and declare the independence of the Irish Republic. Later that same day the Irish Republican Army, organised by Minister for Finance and IRB president Michael Collins, begins the Irish War of Independence with the Soloheadbeg ambush.

(Pictured: Rebel prisoners are marched out of Dublin by the British Army)

Dr. Tiede Herrema, chief executive of the Dutch-owned Ferenka factory in Ballyvarra, County Limerick, is kidnapped by the Provisional Irish Republican Army (IRA) on October 3, 1975. He is a Dutch businessman, born in Zuilen on April 21, 1921.

On the morning of October 3, Herrema is driving from his home in Castletroy, County Limerick, to an early-morning meeting at the Ferenka steel plant when he is abducted by two republicans, Marion Coyle and Eddie Gallagher.

Herrema, invariably referred to thereafter as “the Dutch industrialist,” had been dispatched by the parent company in his native Netherlands to troubleshoot the strike-ridden factory, which employs 1,200 at a time when the Irish economy is reeling from the oil crisis and six years of Northern Ireland troubles.

The kidnappers, banking that Taoiseach Liam Cosgrave’s government will quietly cave in, so as not to scare off other foreign investors, threatens to execute Herrema in 48 hours unless it releases republican prisoners Rose Dugdale, Kevin Mallon (a friend of Coyle’s) and James Hyland. It is the start of a 36-day ordeal for Herrema and his family, sparking the biggest manhunt in the State’s history.

Two weeks later a tape of Herrema’s voice is released, accompanied by demands for a £2 million ransom and a flight to the Middle East. After 18 days the kidnappers are traced to a terraced house in Monasterevin, County Kildare.

When Gardaí smashes the front door down the kidnappers retreat to the house’s box room, where they hole up with the hostage in a stand-off that lasts 18 days, with the world’s media camped outside.

After several days without food or water the kidnappers begin to accept supplies, as well as underpants and a chamber pot, hoisted up in a shopping basket. On day 18, Gallagher claims to be getting severe headaches and neck cramps, which Herrema takes as a sign that he is seeking a way out. Soon afterwards the kidnappers throw their guns out of a window and surrender. Herrema leaves Ireland soon thereafter.

Coyle was sentenced to 15 years, of which she serves nine. Gallagher serves 14 years of his 20-year sentence. In 1978 Gallagher and Dugdale become the first convicted prisoners in the State’s history to be married behind bars.

Herrema eventually returns to Ireland to present an episode of Saturday Live. He and his wife Elizabeth are made honorary Irish citizens in 1975, and he is made a Freeman of the city of Limerick. In 2005, he donates his personal papers to the University of Limerick. 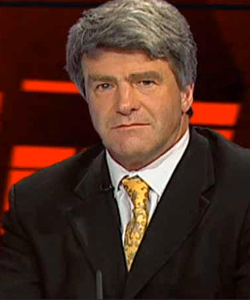 Eoghan Corry, Irish journalist and author regarded as the most extensively traveled writer in Ireland, averaging over 30 countries a year, is born in Dublin on January 19, 1961.

Corry is the third of four children of Patrick Corry (1916–1971) from Kilmacduane, Cooraclare and Anne Corry (1929–2009) from Clahanmore, Milltown Malbay, both from County Clare. He grows up in Ardclough, Straffan, County Kildare.

Corry is educated at Scoil Mhuire, Clane, at the Dublin Institute of Technology (DIT) and University College Dublin (UCD). His first published work, as a teenager, is poetry in English and the Irish language in literary magazines and the New Irish Writing section of The Irish Press.

He begins his journalistic career as a sportswriter with The Irish Times and Sunday Tribune where he wins several awards and becomes sports editor. Determined to pursue a career outside of sports journalism, he joins The Sunday Press as a feature writer in 1985 and becomes features editor of The Irish Press in 1986, bringing younger writers and a more contemporary, polemical and literary style to the paper. He revives the literary and travel sections of the paper and is an adjudicator of the Dublin Theatre Festival awards.

When The Irish Press closes in 1995 he becomes Features Editor of the short-lived Evening News, storylines the Gaelic Athletic Association (GAA) museum in Croke Park in 1998 and is founding editor of High Ball magazine. Since then he has been a columnist, first with The Sunday Business Post and then with the Evening Herald and Irish Independent. As a journalism lecturer in the Dublin Institute of Technology he tells students that “journalism is about pissing people off.”

Since 2002 Corry has edited Ireland’s biggest circulation travel publication, Travel Extra. He has fronted travel shows broadcast in Ireland and the Middle East and is a regular commentator on travel affairs to Raidió Teilifís Éireann (RTÉ) and TG4, and an occasional guest contributor to BBC Northern Ireland. He writes the ten-part series GAA@125, screened on Irish television station TG4 in 2009. He appears on Tonight with Vincent Browne from time to time to preview the next day’s newspapers.

Corry is awarded a lifetime “contribution to the industry” award at the Irish Travel Industry Awards in Dublin on January 22, 2016. He receives the Business Travel Journalist of the year award in London in October 2015. Previous awards include Irish sportswriter of the year, young journalist of the year, Seamus Kelly award, MacNamee award for coverage of Gaelic Games and is short listed for sports book of the year.

Mayne attends school at Regent House School, a school for students age 4 to 18. While at Regent he discovers his skill and love for the game of rugby. He also enjoys cricket and golf and becomes a marksman with the rifle club. He goes on to Queen’s University Belfast to study law. At university he takes up boxing and becomes the Irish Universities Heavyweight Champion in August 1936. He also wins the Scrabo Golf Club President’s cup in 1937. He graduates from Queen’s University in 1939.

During 1938, Mayne travels to Africa on the 1938 British Lions Tour to South Africa. He plays on a team that tours around Africa playing other local clubs. While traveling, it is discovered that Mayne has a wild side and on various occasions finds himself in trouble. His “go to” is to trash the hotel rooms of his teammates. The team includes some of the best players from around Ireland and Britain.

In 1939, with outbreak of World War II, Mayne joins the Supplementary Reserves in Newtownards and receives a commission in the Royal Artillery. He serves in several units in Ireland and England, generally with light and heavy anti-aircraft units. He volunteers for the No. 11 (Scottish) Commando unit which is sent to the Middle East. There he sees action during the Syria-Lebanon campaign. Specifically during the Battle of the Litani River, he draws attention from Captain David Stirling who is forming the new Special Air Service (SAS). Sterling recruits Mayne for the new SAS while he is in jail for striking his commanding officer.

From November 1941 to the end of 1942, Mayne is involved in several raids behind enemy lines with the SAS. He uses jeeps to go to various Axis bases and begin blowing up planes and fuel dumps. It is claimed that he personally destroyed 100 planes during these missions. In addition to serving in the Middle East, he serves as well in Sicily, Italy, Belgium, the Netherlands, Germany, Norway and France. In most of these locations he works with the resistance behind the enemy lines. In France he helps to train the French Resistance.

By the end of the war, Mayne has been promoted to the rank of Lieutenant Colonel and has also received the British Army’s Distinguished Service Order with three bars, which means he received the award four times. After the war he joins the British Antarctic Survey in the Falkland Islands. He returns home to Newtownards when back issues, which started while he was serving in the Middle East, become more difficult for him.

Mayne is initiated into Eklektikos Lodge No. 542 in Newtownards in 1945. He is a very enthusiastic mason and joins a second lodge in Newtownards, Friendship Lodge No. 447. On the evening of December 13, 1955, he attends a meeting of Friendship Lodge and then joins some of his masonic brothers at a local bar. At about 4:00 AM on December 14, he is found dead in his Riley RM roadster in Mill Street, Newtownards, having reportedly collided with a farmer’s vehicle.

At his funeral hundreds of mourners turn out to pay their respects and to see him interred in a family plot in the town’s old Movilla Abbey graveyard. After his death his masonic jewel is preserved for many years by an old school friend before it is presented to Newtownards Borough Council where it is displayed in the Mayoral Chamber of the Council Offices.