The Battle of Ballyellis, a clash during the Irish Rebellion of 1798, takes place on June 30, 1798. The battle is between a surviving column of the dispersed Wexford rebel army and pursuing British forces. It is the last Irish victory in the most violent Irish rebellion in modern history with at least 10,000 killed in a campaign that sees appalling atrocities inflicted by English and Irish.

The British victory at the Battle of Vinegar Hill on June 21 had denied the rebels static bases of operation but had not finished the rebellion and at least three major columns of rebels are operating throughout the southeast, moving outwards from County Wexford in an effort to spread and revive the rebellion.

One such column, numbering about 1,000 but accompanied by a number of women and juveniles, is mobile in north County Wexford, continually altering course to elude combined movements of pursuing British forces. The column is led by Joseph Holt, and under his command Denis Taaffe. It heads in the direction of Carnew, County Wicklow, toward the security offered by its mountain ranges when one of its foraging parties is intercepted and destroyed by a cavalry patrol. It quickly becomes evident to the British authorities that this party is a detachment from the main body of rebels. A mounted force of 200 troops consisting of Ancient Britons, dragoons, and three yeomanry corps, assemble near the neighbourhood of Monaseed to begin a pursuit of the rebels.

However, the approaching British are spotted and a force of rebels then moves ahead of the main force to prepare an ambush at the townland of Ballyellis. The spot chosen is behind a curve in the road flanked by high ditches and estate walls. Wagons are placed on the road and access points cut into the ditches. The main force arrives and deploys itself behind the wagons, on the wall and ditches with a small force left to stand on the road ahead of the barricades standing to face and lure in the approaching soldiers.

Upon spotting the small force standing on the road, the pursuing British quicken their pace and charge forward, assuming that they are facing only the rearguard of the fleeing column. Upon reaching the turn, they are met by a barrage of gunfire and are hemmed in by the rebels on three sides. As more mounted troops arrive they press their comrades further into the trap making effective manoeuvre impossible and many are easily picked off by the long pikes of the rebels.

The rear-ranks quickly flee with a few more soldiers escaping by jumping their mounts over the ditch. The rebels organise a relentless pursuit of the soldiers who are tracked and killed through the adjoining fields. At the end of the action about 120 troops, including a French émigré, and two officers are killed with no rebel casualties.

The news of this rebel victory comes as a shock to the authorities in Dublin Castle who had assumed that the offensive capabilities of the rebels had been finished at the Battle of Vinegar Hill. Reports of the defeat are downplayed and the scale of losses withheld from the general public, but the military now recognises Wicklow as the main theatre of rebel operations and begins to transfer troops there in anticipation of a new anti-insurgency campaign. 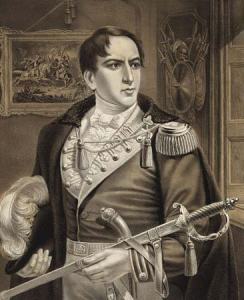 Robert Emmet, one of the most famous revolutionaries in Irish history, is captured by the British at the home of a Mrs. Palmer in Harold’s Cross, outside Dublin on August 25, 1803.

Emmet is born at 109 St. Stephen’s Green in Dublin on March 4, 1778. He is the youngest son of Dr. Robert Emmet, a court physician, and his wife Elizabeth Mason. He attends Oswald’s school in Dopping’s-court, off Golden-lane and enters Trinity College, Dublin, in October 1793 at the age of fifteen. In December 1797, he joins the College Historical Society, a debating society.

While he is in college, his brother Thomas and some of his friends become involved in political activism. Emmet becomes secretary of a secret United Irish Committee in college and is expelled in April 1798 as a result. That same year he flees to France to avoid the many British arrests of nationalists that are taking place in Ireland. While in France, he garners the support of Napoleon, who promises to lend support when the upcoming revolution starts.

After the Irish Rebellion of 1798, Emmet is involved in reorganising the defeated Society of United Irishmen. In April 1799, a warrant is issued for his arrest. He escapes and soon after travels to the continent in the hope of securing French military aid. His efforts are unsuccessful, as Napoleon is concentrating his efforts on invading England. He returns to Ireland in October 1802.

In March of the following year, Emmet begins to prepare a new rebellion, with fellow Anglo-Irish revolutionaries Thomas Russell and James Hope. The revolutionaries conceal their preparations, but a premature explosion at one of Emmet’s arms depots kills a man, forcing Emmet to advance the date of the rising before the authorities’ suspicions are aroused.

Despite being unable to secure help from Michael Dwyer‘s Wicklow rebels and many rebels from Kildare turning back due to the scarcity of firearms, the rising begins in Dublin on the evening of July 23, 1803. Failing to seize the lightly defended Dublin Castle, the rising amounts to a large-scale disturbance in the Thomas Street area. Emmet witnesses a dragoon being pulled from his horse and piked to death, the sight of which prompts him to call off the rising to avoid further bloodshed. However, sporadic clashes continue into the night until finally quelled by British military forces.

Emmet flees into hiding, moving from Rathfarnham to Harold’s Cross so that he can be near his sweetheart, Sarah Curran. He is captured on August 25 and taken to Dublin Castle, then later removed to Kilmainham Gaol. Vigorous but ineffectual efforts are made to procure his escape.

Emmet is tried for and found guilty of high treason on September 19, 1803. Chief Justice John Toler, 1st Earl of Norbury sentences Emmet to be hanged, drawn, and quartered, as is customary for conviction of treason. The following day, Emmet is executed in Thomas Street near St. Catherine’s Church. He is hanged and beheaded after his death. Out of fear of being arrested, no one comes forward to claim his remains.

Emmet’s remains are first delivered to Newgate Prison and then returned to Kilmainham Gaol, where the jailer is under instructions to be bury the remains in a nearby hospital’s burial grounds if no one claims them. No remains have been found there and, though not confirmed, it appears that he was secretly removed and reinterred in St. Michan’s Church, a Dublin church with strong United Irish associations. There is also speculation that the remains are buried secretly in the vault of a Dublin Anglican church. When inspected in the 1950s, a headless corpse is found in the vault but can not be identified. The widely accepted theory is that Emmet’s remains are transferred to St. Peter’s Church in Aungier St. under cover of the burial of his sister in 1804. In the 1980s the church is deconsecrated and all the coffins are removed from the vaults. The church has since been demolished.