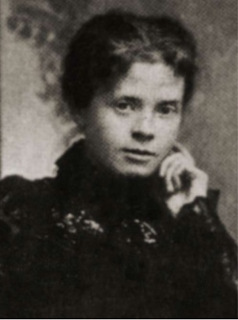 Alice Letitia Milligan, Irish nationalist poet and writer, is born in Gortmore, near Omagh, County Tyrone on September 4, 1865. She is also active in the Gaelic League.

Milligan is brought up as a Methodist, the daughter of the writer Seaton Milligan, antiquarian and member of the Royal Irish Academy (RIA). She is one of eleven children, including music collector Charlotte Milligan Fox, and from 1877 to 1887 attends Methodist College Belfast (MCB), after which she completes a teacher-training course. Together with her father she writes a political travelogue of the north of Ireland in 1888, Glimpses of Erin. She writes her first novel, A Royal Democrat, in 1890.

After the death of Charles Stewart Parnell, Milligan becomes an ardent nationalist. In 1894 with Jenny Armour she founds branches of the Irish Women’s Association in Belfast and other places, and becomes its first president. With Ethna Carbery she founds two nationalist publications in the 1890s, The Northern Patriot, and later The Shan Van Vocht, a monthly literary magazine published in Belfast from 1896 to 1899.

Milligan is a figure of the Irish Literary Revival, and a close associate of Douglas Hyde. She is also “on first-name terms” with William Butler Yeats, James Connolly and Roger Casement. Thomas MacDonagh, writing in the Irish Review in September 1914, describes her as “the best Irish poet of his generation.”

Milligan is awarded an honorary doctorate by the National University of Ireland in 1941. She is also honored during the last decade of her life by the Literary Department of Queen’s University Belfast for her poetry.

Alice Milligan dies in Omagh in April 1953 and is buried in Blackford Municipal Cemetery, County Tyrone. On her headstone is inscribed “She loved no other place than Ireland.”