Kettle is born on February 9, 1880 in Malahide or Artane, Dublin, the seventh of twelve children of Andrew J. Kettle (1833–1916), a leading Irish nationalist politician, progressive farmer, agrarian agitator and founding member of the Irish National Land League, and his wife, Margaret (née McCourt). One of his brothers is the industrial pioneer Laurence Kettle. He is influenced considerably through his father’s political activities.

Like his brothers, Kettle is educated at the Christian Brothers‘ O’Connell School at Richmond Street, Dublin, where he excels. In 1894 he goes to study with the Jesuits at Clongowes Wood College in County Kildare, known as a wit and a good debater. He enjoys athletics, cricket and cycling and attains honours in English and French when leaving. He enters University College Dublin in 1897.

As a member of the Irish Parliamentary Party, Kettle is Member of Parliament (MP) for East Tyrone from 1906 to 1910 at Westminster. He is a much admired old comrade of James Joyce, who considers him to be his best friend in Ireland, as well as the likes of Francis Sheehy-Skeffington, Oliver St. John Gogarty and Robert Wilson Lynd. He joins the Irish Volunteers in 1913 and upon the outbreak of World War I in 1914 enlists for service in the British Army.

Kettle is killed in action with ‘B’ Company of the 9th Battalion of the Royal Dublin Fusiliers in an attack on German lines on September 9, 1916, near the village of Ginchy during the Somme Offensive in France. During the advance he is felled when the Dublin Fusiliers are “struck with a tempest of fire,” and having risen from the initial blow, he is struck again and killed outright. His body is buried in a battlefield grave by the Welsh Guards, but the location of the grave is subsequently lost. His name is etched on the monumental arched gateway for the missing of the Somme at Thiepval.

Kettle is one of the leading figures of the generation who, at the turn of the twentieth century, give new intellectual life to Irish party politics, and to the constitutional movement towards All-Ireland Home Rule. A gifted speaker with an incisive mind and devastating wit, his death is regarded as a great loss to Ireland’s political and intellectual life.

As G. K. Chesterton surmises, “Thomas Michael Kettle was perhaps the greatest example of that greatness of spirit which was so ill rewarded on both sides of the channel […] He was a wit, a scholar, an orator, a man ambitious in all the arts of peace; and he fell fighting the barbarians because he was too good a European to use the barbarians against England, as England a hundred years before has used the barbarians against Ireland.”

George Clancy, Irish nationalist politician and Mayor of Limerick, is shot in his home by Royal Irish Constabulary (RIC) Auxiliaries and dies on March 7, 1921 during the Irish War of Independence.

Clancy is born at Grange, County Limerick in 1881 to a family with a strong republican tradition. He is educated at Crescent College, Limerick, and thereafter at the Catholic University in St. Stephen’s Green, now University College, Dublin. Among his friends at the university are James Joyce, Francis Sheehy-Skeffington, Tomás Mac Curtain and Terence MacSwiney. He helps form a branch of the Gaelic League at college and persuades his friends, including Joyce, to take lessons in the Irish language. He plays hurling and is a good friend of Michael Cusack. With Arthur Griffin he joins the Celtic Literary Society. It is said that he is the model for the character of Michael Davin in Joyce’s A Portrait of the Artist as a Young Man.

Clancy graduates in 1904 and finds a position teaching the Irish language at Clongowes Wood College and is active in the Gaelic Athletic Association. Due to ill health he has to return to his home at Grange. In 1908 he comes to Limerick to teach Irish. In 1913 he joins the Irish Volunteers. In 1915 he marries Máire Killeen, a teacher. After the 1916 Easter Rising he is arrested and imprisoned in Cork, but is released before he comes to trial following a hunger strike.

Clancy helps in Éamon de Valera‘s election campaign in East Clare. He nearly dies of Spanish flu during the 1918 epidemic but recovers and, in January 1921, he is elected Sinn Féin Mayor of Limerick.

On the night of March 6, 1921 three Auxiliaries come to Clancy’s house and one of them shoots him, injuring him fatally. His wife is also injured in the attack. The previous Mayor, Michael O’Callaghan, is also murdered on the same night by the same group.

Suspicion immediately falls upon members of the Black and Tans, but a British inquiry into the murder, like most such inquiries through the years, absolve Crown forces of any blame. One of Clancy’s killers is later said to be George Nathan who dies in the Spanish Civil War in July 1937. 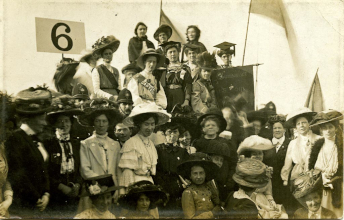 The Irish Women’s Franchise League (IWFL), an organisation for women’s suffrage, is established in Dublin on November 4, 1908. Its founder members include Hanna Sheehy-Skeffington, Francis Sheehy-Skeffington and James H. Cousins. Thomas MacDonagh is also a member. The IWFL has 1,000 members by 1912 but only about fifty of these are active.

In the early 20th century, the Irish Parliamentary Party under John Redmond and his deputy John Dillon is opposed to votes for women, as is the British prime minister, H. H. Asquith.

In June 1912, after a meeting of a number of women’s organisations, Hanna Sheehy-Skeffington and Margaret Cousins with six other members of the IWFL smash government windows in the General Post Office (GPO) and other government buildings. They are arrested, charged, and jailed. The following month Asquith makes a visit to Dublin to address a meeting in the Theatre Royal. Frank Sheehy-Skeffington manages to gain entrance and demands votes for women before being thrown out. Meanwhile Asquith’s carriage is attacked by British suffragists Mary Leigh and Gladys Evans. In that attack John Redmond is injured. Leigh and Evans go on hunger strike in Mountjoy Gaol, and are joined by the imprisoned Irish IWFL members in solidarity.

In March 1913 a bust of John Redmond in the Royal Hibernian Academy is defaced by a suffragist protesting against the failure of the Irish Parliamentary Party to support a Women’s Franchise Bill in the House of Commons. In contrast, as a mark of solidarity with the women, James Connolly travels from Belfast to Dublin to speak at one of the IWFL’s weekly meetings which is held in the Phoenix Park, and members of the Irish Transport and General Workers’ Union (ITGWU) provide protection and offer escorts to women as they leave the meetings.

Hanna Sheehy-Skeffington loses her teaching job in 1913 when she is arrested and put in prison for three months after throwing stones at Dublin Castle. While in jail she starts a hunger strike but is released under the Prisoners (Temporary Discharge of Ill Health) Act 1913 and is soon rearrested.

The league keeps a neutral stance on Home Rule, but is opposed to World War I. After the killing of Francis Sheehy-Skeffington by a British officer in 1916, it supports Sinn Féin.

The Irish Women’s Franchise League publishes a paper, The Irish Citizen, from 1912 to 1920. The paper is edited originally by James H. Cousins.