James Thomson, Irish mathematician notable for his role in the formation of the thermodynamics school at the University of Glasgow, Is born on November 13, 1786, in Ballynahinch, County Down, in what is now Northern Ireland. He is the father of the engineer and physicist James Thomson and the physicist William Thomson, 1st Baron Kelvin.

Born into an Ulster Scots family, Thomson is the fourth son of Agnes Nesbit and James Thomson, a small farmer, at Annaghmore, near Ballynahinch, County Down, in Ulster. His early education is from his father. At the age of 11 or 12 he finds out for himself the art of dialling. His father sends him to a school at Ballykine, near Ballynahinch, kept by Samuel Edgar, father of John Edgar. Here he soon rises to be an assistant.

Wishing to become a minister of the Presbyterian church, Thomson enters the University of Glasgow in 1810, where he studies for several sessions, supporting himself by teaching in the Ballykine school during the summer. He graduates MA in 1812, and in 1814 he is appointed headmaster of the school of arithmetic, bookkeeping, and geography in the newly established Royal Belfast Academical Institution. In 1815 he is Professor of Mathematics in its collegiate department. Here he proves himself as a teacher. In 1829 the honorary degree of LL.D. is conferred upon him by the University of Glasgow, where in 1832 he is appointed Professor of Mathematics. He holds this post until his death on January 12, 1849.

Thomson is buried with his family on the northern slopes of the Glasgow Necropolis to the east of the main bridge entrance. The grave is notable due to the modern memorial to Lord Kelvin at its side.

Thomson is the author of schoolbooks that have passed through many editions including Arithmetic (1819), Trigonometry, Plane and Spherical (1820), Introduction to Modern Geography (1827), The Phenomena of the Heavens (1827), The Differential and Integral Calculus (1831), and Euclid (1834).

A paper, “Recollections of the Battle of Ballynahinch, by an Eye-witness,” which appears in the Belfast Magazine for February 1825, is from his pen. 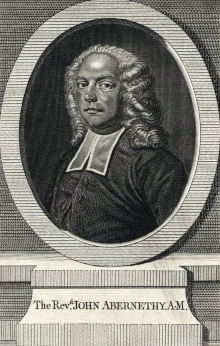 John Abernethy, Irish Presbyterian minister and church leader, is born at Coleraine, County Londonderry on October 19, 1680. He is the grandfather of the surgeon John Abernethy.

Abernethy’s father, also named John, a Presbyterian minister, accompanies Patrick Adair on a deputation from the general committee of Ulster presbyterians, who present a congratulatory address to William III in London in 1689, and obtain from the king a letter (November 9, 1689) recommending their case to Meinhardt Schomberg, 3rd Duke of Schomberg.

At the age of 13, Abernethy enters the University of Glasgow and, upon concluding his course there, goes on to the University of Edinburgh, where he soon moves in the most cultured circles. Returning home, he is licensed to preach from his Presbytery before he is twenty-one. In 1701 he is called to accept charge of an important congregation in Antrim. After an interval of two years, mostly spent in further study in Dublin, he is ordained there on August 8, 1703. He becomes a noted debater in the synods and assemblies of his church and a leading evangelist. He has been described as being at this time “the young minister of Antrim … a man of studious habits, heretical opinions, and remarkable ability.”

In 1712, he is devastated by the loss of his wife, Susannah Jordan. Five years later, he is invited to the congregation of Usher’s Quay, Dublin, and also to what is called the Old Congregation of Belfast. The synod assigns him to Dublin. After careful consideration he refuses and remains at Antrim. This refusal arouses disapproval and a controversy follows, with Abernethy standing firm for religious freedom and repudiating the ecclesiastical courts. The controversy and quarrel bears the name of the two camps in the conflict, the “Subscribers” and the “Non-subscribers.” Abernethy and his associates sow the seeds of the struggle (1821–1840) in which, under the leadership of Dr. Henry Cooke, the Arian and Socinian elements of the Presbyterian Church in Ireland are thrown out.

Much of what Abernethy contends for, and which the “Subscribers” oppose bitterly, is silently granted in the lapse of time. In 1726, the “Non-subscribers” are cut off, with due ban and solemnity, from the Presbyterian Church of Ireland. In 1730 he moves to Wood Street, Dublin. It is said of him that, although a “Non-subscriber,” he is a Trinitarian. However, Dr. Cooke states that Arianism “made very considerable progress under the patronage of high names, as Abernethy, the author of a very excellent work upon the Attributes, who gave it a great deal of eclat.”

In 1731 comes the greatest controversy in which Abernethy is involved. It is nominally about the Test Act, but actually on the entire question of tests and disabilities. His stand is against all laws that, upon account of mere differences of religious opinions and forms of worship, exclude men of integrity and ability from serving their country.

Abernethy is nearly a century in advance of his age. He has to reason with those who deny that a Roman Catholic or Dissenter can be a “man of integrity and ability.” 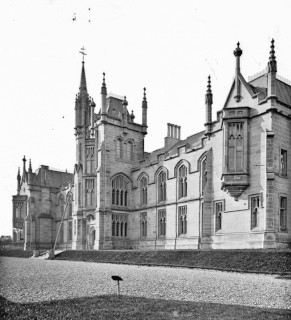 Magee College opens on October 10, 1865 as a Presbyterian Christian arts and theological college in Derry, County Londonderry, Northern Ireland. Since 1953, it has had no religious affiliation and provides a broad range of undergraduate and postgraduate academic degree programmes in disciplines ranging from business, law, social work, creative arts & technologies, cinematic arts, design, computer science and computer games to psychology and nursing.

The Magee Campus gains its name from Martha Magee, the widow of a Presbyterian minister, who, in 1845, bequeathed £20,000 to the Presbyterian Church in Ireland to found a college for theology and the arts. It opens in 1865 primarily as a theological college, but accepts students from all denominations to study a variety of subjects. It is a college of the Royal University of Ireland from 1880 and later becomes associated with Trinity College, Dublin when the Royal University is dissolved in 1909 and replaced by the National University of Ireland.

During World War II, the college is taken over by the Admiralty for Royal NavyRoyal Navy operational use, becoming with Ebrington Barracks (HMS Ferret), a major facility in the Battle of the Atlantic. A 2013 BBC report describes a secret major control bunker, later buried beneath the lawns of the college. From 1941 this bunker, part of Base One Europe, together with similar bunkers in Derby House, Liverpool and Whitehall is used to control one million Allied personnel and fight the Nazi U-boat threat.

In 1953, Magee Theological College separates from the remainder of the college, eventually moving to Belfast in a 1978 merger that forms Union Theological College. Also in 1953, Magee College breaks its ties with Dublin and becomes Magee University College. It is hoped by groups led by the University for Derry Committee that this university college would become Northern Ireland’s second university after Queen’s University Belfast. However, in the 1960s, following the recommendations in The Lockwood Report by Sir John Lockwood, Master of Birkbeck College, London and former Vice-Chancellor of the University of London, the Parliament of Northern Ireland makes a controversial decision to pass it over in favour of a new university in Coleraine. Instead it is incorporated into the two-campus New University of Ulster in 1969. The next fourteen years see the college halve in size, while development focuses on the main Coleraine campus.

In 1984, the New University merges with the Ulster Polytechnic, and Magee becomes the early focus of development of a new four-campus university, the University of Ulster. Student and faculty numbers recover and grow rapidly over the next ten to fifteen years, accompanied by numerous construction projects. Magee grows from just 273 students in 1984 to over 4,000 undergraduates in 2012. In 2012, the University continues to lobby the Northern Ireland Executive for an additional 1,000 full-time undergraduate places, leading to 6,000 students at Magee in 2017.

On September 14, 2013 Magee hosts, for the first time on the island of Ireland, the 23rd International Loebner Prize Contest in Artificial Intelligence based on the Turing test proposed by the renowned British computer scientist Alan Turing in 1950. Turing also works on cracking the Enigma machine code at Bletchley Park which is instrumental in the Battle of the Atlantic.

In October 2014 the University of Ulster is rebranded as Ulster University. 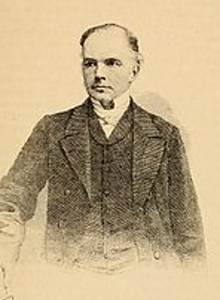 William Dool Killen, a minister of the Presbyterian Church in Ireland and church historian, is born at Church Street, Ballymena, County Antrim, on April 16, 1806.

Killen is the third of four sons and nine children of John Killen (1768–1828), a grocer and seedsman in Ballymena, by his wife Martha, daughter of Jesse Dool, a farmer in Duneane. His paternal grandfather, a farmer at Carnmoney, marries Blanche Brice, a descendant of Edward Brice. A brother, James Miller Killen (1815–1879), is a minister in Comber, County Down. Thomas Young Killen is his father’s great-nephew.

After attending local primary schools, Killen goes to Ballymena Academy around 1816, and in November 1821 enters the collegiate department of the Royal Belfast Academical Institution, under James Thomson. In 1827, he is licensed to preach by the Presbytery of Ballymena, and on November 11, 1829 he is ordained minister at Raphoe, County Donegal.

In July 1841 Killen is appointed, by the General Assembly of the Presbyterian Church in Ireland, its professor of church history, ecclesiastical government, and pastoral theology, in succession to James Seaton Reid. He concentrates on history. When Assembly’s College, Belfast is set up in 1853, he becomes one of the professors there. In 1869 he is appointed president of the college, in succession to Henry Cooke, and undertakes fundraising for professorial endowments and new buildings. In 1889 he resigns his chair but continues as president.

During his career Killen receives the degrees of D.D. (1845) and of LL.D. (1901) from the University of Glasgow. His portrait, painted by Richard Hooke, hangs in the Gamble library of the college.

William Dool Killen dies on January 10, 1902, and is buried in Balmoral Cemetery, Belfast, where a monument marks his resting place.

The amendment deletes the entirety of Article 44.1.2 which allowed the State to recognise the special position of the Holy Catholic Apostolic and Roman Church as the guardian of the Faith professed by the great majority of the citizens.

In drafting the Irish constitution in 1936 and 1937, Éamon de Valera and his advisers choose to reflect what has been a contemporary willingness by constitution drafters and lawmakers in Europe to mention and in some ways recognise religion in explicit detail. This contrasts with many 1920s constitutions, notably the Constitution of the Irish Free State of 1922, which, following the secularism of the initial period following World War I, simply prohibits any discrimination based on religion or avoids religious issues entirely.

De Valera, his advisers, and the men who put words to de Valera’s concepts for the constitution face conflicting demands in his drafting of the article on religion. In contemporary terms, the Amendment marks a defeat for conservative Catholics and Pope Pius XI explicitly withholds his approval from it.

Though perceived in retrospect as a sectarian article, Article 44 is praised in 1937 by leaders of Irish Protestant churches, notably the Church of Ireland Archbishop of Dublin, and by Jewish groups. Conservative Catholics condemn it as “liberal.”

When the contents of Article 44 are put to Pope Pius XI by Cardinal Eugenio Pacelli, then Cardinal Secretary of State, later Pope Pius XII, the pope states in diplomatic language, “We do not approve, nor do we not disapprove – we will remain silent.” It is said that the Vatican is privately more appreciative of the constitution, and Pius XII later praises it.

The Fifth Amendment is introduced by the Fianna Fáil government of Jack Lynch and supported by every other major political party. The Catholic Church does not voice any objection to the amendment, but it is opposed by some conservative Catholics. Some leading members of the Church of Ireland and the Jewish Community say during the campaign that while they appreciate the Article’s recognition of their existence in 1937, it is no longer needed in the 1970s and has lost its usefulness.

Having completed its passage through the Oireachtas and been adopted by the people, it is enacted by being signed into constitutional law by the President of Ireland, the man who had drafted the original article, Éamon de Valera.